The Days of Yesteryear start next June

It's an idea that's at least 50 years in the making. When the original TV version of Batman was introduced in 1966, DC Comics should have put out its own title to take advantage of a campy, over-the-top version of the character. Instead, they were in the midst of their "Go-Go Checks" era and if they made a reference to the TV show in the comic book, it was made in derision.

Derision is not the order of the day in today's DC Comics. They are embracing the TV and movies based on their characters with open arms. You could see instances of this change of mind obliquely with certain titles, but now it's a mandate with extra-added marketing oomph.

For those of you would-be "first" comics collectors, the message is very simple: The DC titles will be rebooted with all new Issue #1 versions. 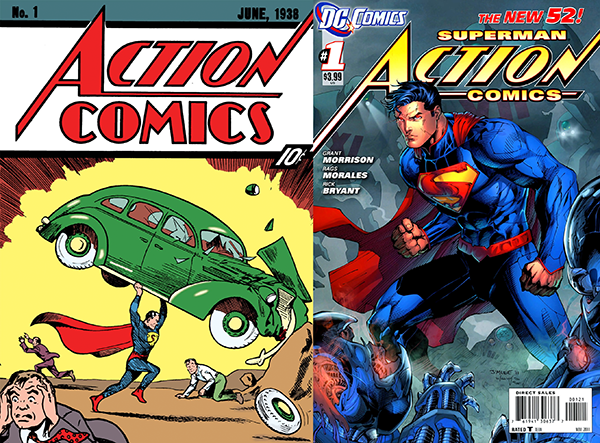 Some of you might be saying, "Again?" That's right, the DC comics you know and love received a Volume 2, Issue #1 treatment just a few years ago. Well, this is obviously Volume 3 now, so get used to it, all you people who would still like to get your hands on Action Comics #1 or Detective Comics #27.

You're going to hear a lot of incredulous talk about this out there, both in the media and on the social networks.

Why is DC doing this? There are a few reasons:

There is no hard-and-fast rule about magazine numbering. The U.S. Postal Service has certain laws about publications that are mailed in order to receive a special discounted rate. They used to call the rate "Second Class" and now it's called "Periodical," but no respectable comics collector gets his comics mailed to him -- he buys them in pristine condition from Comic Book Guy. 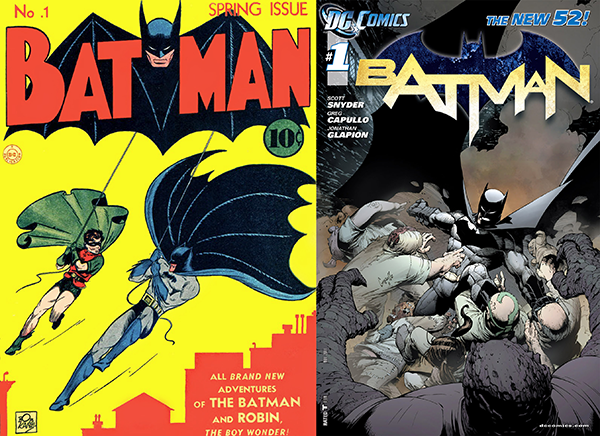 So since they aren't beholding to distribution by mail, comic book companies could conceivably attach "Issue #1" to every issue of their book, if they wanted. This is actually where the USPS gives them an out. In order to make collectors happy, they simply attach a new volume number to the mag. That's what they did to Superman and Batman when they brought out The New 52 a few years ago. That's likely what will happen now.

Because Marvel did it

Marvel and DC have been playing a game of log-rolling for 60 years. If one company sneezes, the other gets a cold.

I've seen this crap for years. Back 50 years ago, when DC owned the comic book business, selling a million copies of both Batman and Superman every issue, a number of comic book afficionados were swayed by the more personal stories coming out of the titles from Marvel. The Marvel characters had more personal foibles than the DC characters. They were more "in-touch" with people's feelings.

Heck, if Stan Lee had been selling a million copies of Spider-Man a month, Peter Parker would have been as cold and insensitive as Clark Kent was.

But the tide turned. The Marvel titles started its road to success. DC characters started having marital and drug problems. Jack Kirby, creator of the Fantastic Four, left Marvel in 1970 to create The New Gods at DC.

Nowadays, Marvel is playing follow-the-leader, bringing out new #1's in answer to DC's New 52 effort. But, see, now DC is one-upping that. Take that, Marvel!

As I said at the beginning of this piece, DC would have been smart to take advantage of the worldwide popularity of the Batman TV show. The recent Batman '66 is exactly what the company should have been doing back then.

The same goes for the 1978 Superman movie and the 1989 Batman movie. Neither of the films were within the continuity of either comic book series when they were released, but what did that matter? Neither of those books are in the same universe of continuity as the original stories from the late 1930s either.

It's fiction, guys. They're all imaginary stories.

Millions of people watch the TV show versions of Arrow, The Flash, Supergirl and Legends of Tomorrow every week. Don't you think they like them? And, if they like them, don't you think some of those viewers would pay a few bucks to read their exploits in a monthly magazine?

That's what DC has got to be thinking.

So it's a great opportunity for would-be first-time comic book collectors to have their chance to say they have some #1 issues of comic books. Oh, they'll have "Volume 3" listed in fine print, but there will come a day, maybe 50 years from now, when that #1 issue will be worth something beyond the cover price.

I know I wish I still had all those 12-cent Silver Age comics I owned 50 years ago.