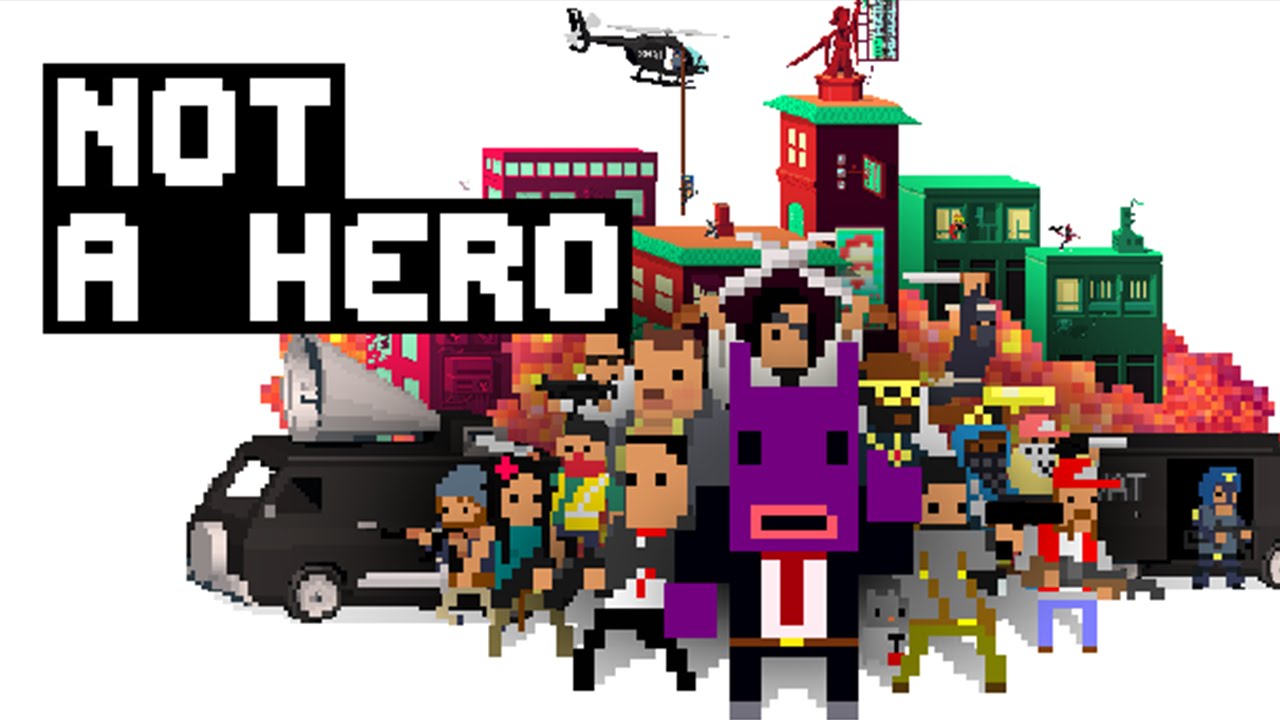 It's not easy this day to be elected into office. You try to be the good guy, say the right things, and make fine promises that you can not only keep, but will be beneficial for people in the long run. Instead of being ahead in the polls, you are far behind some tyrannical douchebag who is bound to wage Armageddon on everything he touches! So what can one do in a situation like this? Well if you're a guy like BunnyLord, you decide to put matters into your own hands (er, paws, or whatever he has).

And thus we have Not A Hero, the latest retro-looking game from Roll7 (OlliOlli). Here you take control of one of BunnyLord's closest friends, as you make your way through warehouse after warehouse shooting bad guys, collecting items, and making the mayoral candidate look good in just about every way imaginable. At first it all looks like a bloody dose of fun & games, and trust me when I say it is. However, it's when you reach a certain point when your tasks from BunnyLord get mad crazy. 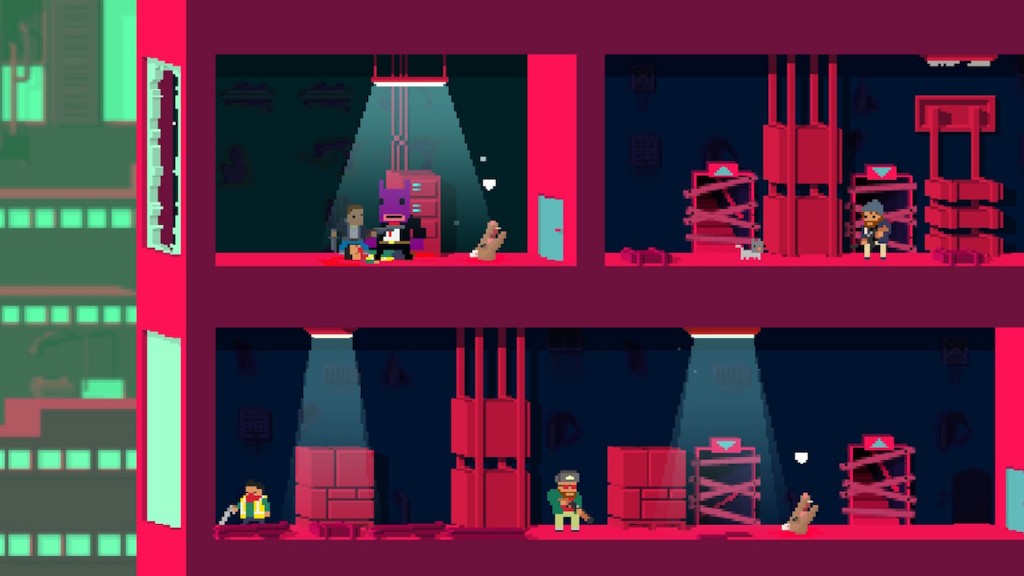 Throughout most of the game you will be tasked to do one main objective, whether it's just kill all the bad guys or making sure a certain aspect of BunnyLord's campaign goes off without a hitch. However in each level you will also be given three other tasks to attempt to reach. This can range from making a certain amount of kills in a few seconds, not getting hit a number of times, or collect all the puppies/stereos/random objects that are lying around in the level. When there are a bunch of bad guys shooting at you, these tasks can be a whole lot more difficult than they should be.

Not A Hero gives you the chance to choose one of nine people to play as, with them all becoming unlockable as the days progress. You start off with Steve, who can tackle enemies with his slide, but probably has the weakest gun in the bunch. Soon you can start unlocking Cletus and his trusty shotgun, Kimmy and her deadly katana, Ronald and his smashy-smashy hammer, and Jesus's hip-thrusting action. During my play-through I found myself sticking to Steve, as that slide of his wound up being more helpful than most of more powerful weapons these other characters carried. 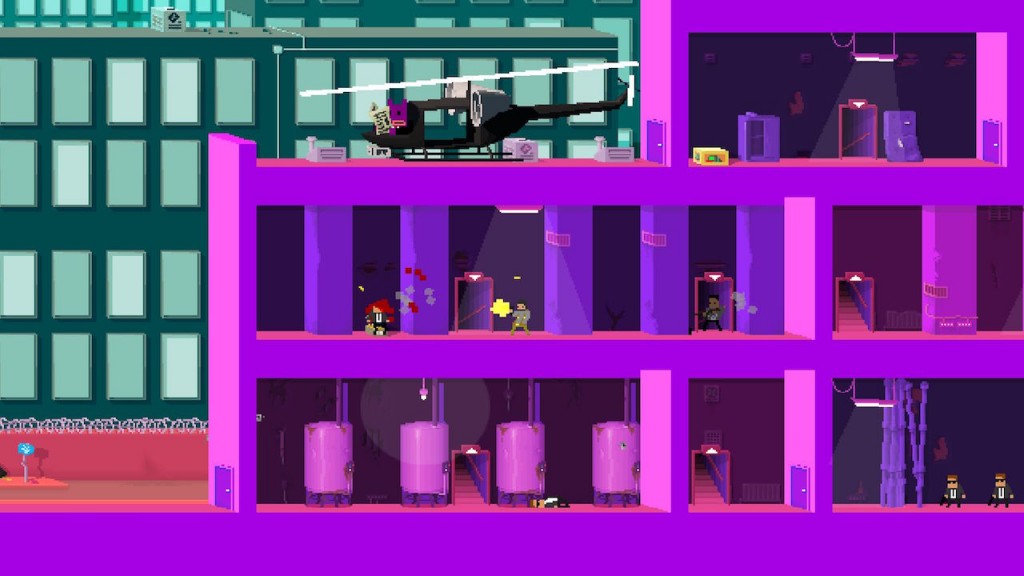 That's why it was helpful when a dead enemy would drop more powerful bullets such as lasers and drills, which could make easier kills all the more enjoyable to watch. Lying out throughout the levels you'll also find grenades, Molotov cocktails, and even a trusty turret that can make mince meat out of all those bad dudes that are making it hard for BunnyLord to be mayor. Of course, sometimes all you need is some sheer luck to make it out alive, along with quick reloading reflex skills.

At first Not A Hero can be fairly easy, as shooting idiot baddies isn't as much rocket science as you'd think there'd be. You can hide behind corners and countertops, and even go for a much deadly one-shot kill or execution-styled maneuver to take them out. It's when they come in drones when the game starts to get tough, and this will happen out of nowhere! The difficulty level spikes dramatically without warning, and what was at first a walk in the park transforms into the climactic scene in The Warriors. As someone who likes his games becoming steadily difficult (i.e. Hotline Miami and its Wrong Number sequel, both also released by Devolver Digital), it took a bit of fun out of the whole experience. 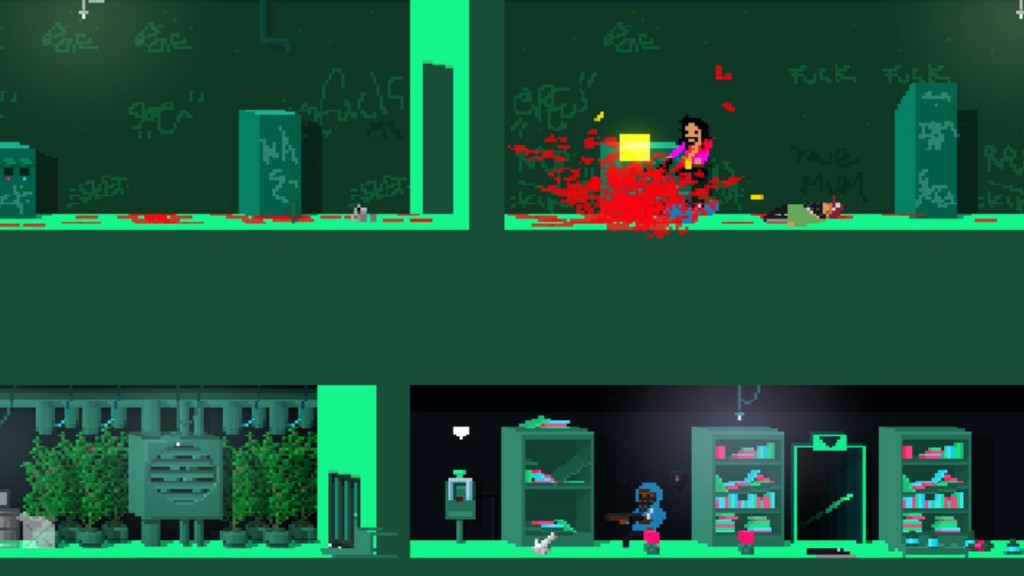 Playing the game on the PS4 is a cinch for the most part. Your main and secondary weapons are fairly easy to jump between, whereas the reload button can take a tiny bit to master during the most dire of moments. However whoever decided that the restart button should be the DualShock 4's touchpad deserves a good smacking. Too many times I found myself playing a level, getting close to the van that BunnyLord had parked, only for my thumb to graze the touchpad and force myself to restart the level. I'm not sure how it is on the Steam versions or where it's placed, but this button needs to be moved someplace else that won't be in danger of being touched at any given moment.

Despite this frustration, Not A Hero entertained me immensely. The character of BunnyLord was a hoot, as he gave speeches on what we must do in order to win and taking us all out for breakfast and milkshakes after a job well done. His pep talks do more to boost one's ego than they do to scorn your subconscious, and when he says another one of his crew does something better than you he'll make note of something embarrassingly funny that you did compared to their skills. 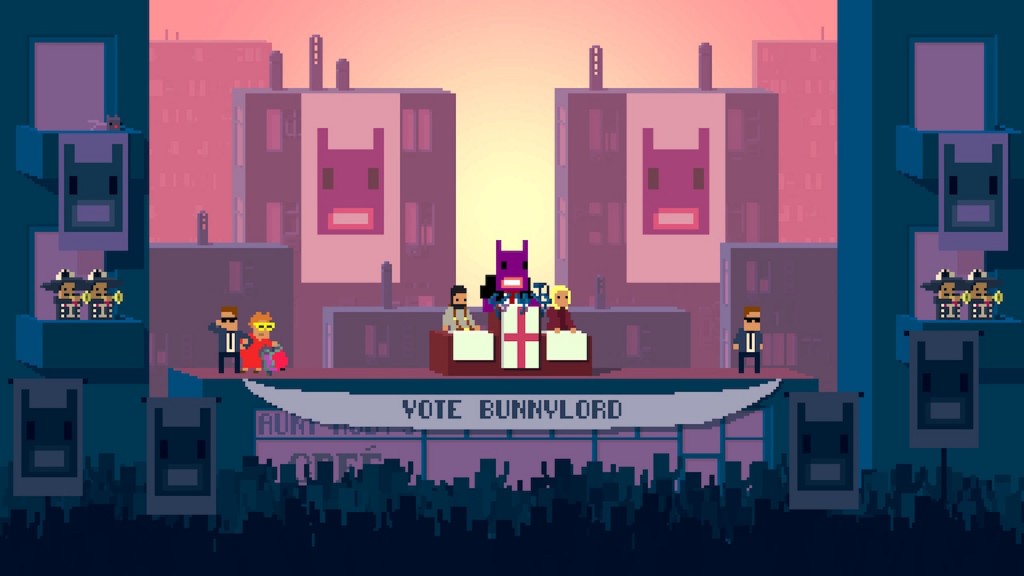 I've gotta say that I don't think I'll ever tire of this old-school look in these modern indie games. After being bombarded with these high-end graphics in some of the top-tiered AAA titles it's just good to see some smaller developer bring out a game that -- while looking like something from the NES days -- feels more fleshed out and filled with more personality than any of these mainstream games. Roll7 has crafted a cool little time warp back to the cartridge-era, where silly bad guy pixels are beaten, shot, and sliced up in the most humorous of ways within a city frozen in time during a neon era.

Not A Hero will take you roughly seven to eight hours to beat, and that's if you don't get stuck repeating certain levels over and over again. (In that scenario, it'll be more like a 10-12 hour play-through.) Although there isn't much in the extras realm, it is fun to replay levels with the unlocked characters and seeing how they'll handle the situation at hand.

Not A Hero is the dirtiest of politics being played for the greater good, and it's all the more fun being able to partake in said dirtiness. It's crass, funny, and the right amount of digital gore and violence to be considered laughable rather than excessive. This election year, put your vote and confidence towards BunnyLord.