HomeComicsCrossing over to the other side
Comics / Dark horse / DC / Marvel

Crossing over to the other side

We're really living in the age of crossovers, aren't we? In the same month we get something like Batman V Superman on the big screen, adding in Wonder Woman, Aquaman and the whole Hee Haw gang, we are getting some pretty remarkable crossovers in comic books as well.

There's that whole Marvel Civil War business coming up, pitting Captain America against Iron Man and adding in a whole slew of Marvel B-team superheroes. But the really remarkable crossovers are over there at Dark Horse.

I've been rifling through a variety of press releases and cover art renditions of a couple of notable crossovers. First was the unlikely pairin of three of them in Predator vs. Judge Dredd vs. Aliens. Just imagine that for a moment.

My head swims just to think of the contractural problems that must have occurred to simply create such a thing. I mean, the intellectual property is owned by three different companies and there have got to be rights issues among the variety of creators of those characters as well.

Not only that, but the story has to be written in a way that satisfies all the owners and creators of those characters. After all, you are going to have to show the Predator and the Aliens and Judge Dredd in a good light, aren't you? You can't make any of them look worthless -- that'll harm that whole franchise for projects in the future. 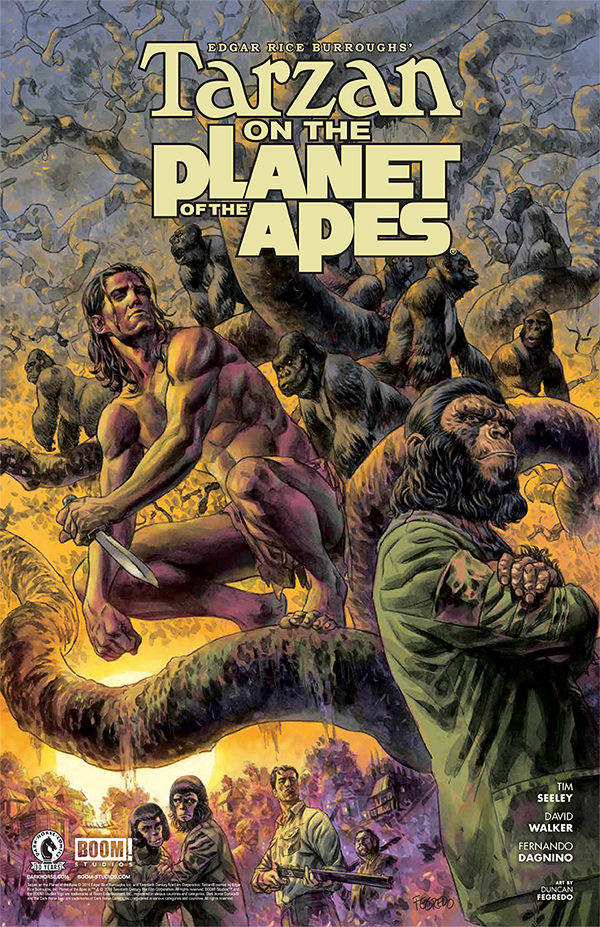 In addition, there's another crossover project from Dark Horse, a five-issue series called Tarzan on the Planet of the Apes. The name alone evokes plenty of possibilities. It makes me wish I had thought of that.

As Dark Horse describes it, "In Tarzan on the Planet of the Apes, Tarzan and his ape brother Caesar, raised as brothers but separated by slave traders, reunite when the war between man and ape takes them from the jungles of Africa to the center of the Earth."

It evokes tremendous opportunities. I just have one suggestion for them, though: Don't show a giant half-destroyed Statue of Liberty in the thing. It's been done.

The mere thought of crossovers delivers all kinds of opportunities. We saw Donald Duck and Daffy Duck together in the Roger Rabbit movie. How about teaming Donald, Daffy and Howard the Duck in a future project? Or how about the stretchy trio of Plastic Man, Elongated Man and Mister Fantastic/Reed Richards?

When you think about it, getting all these entities together in a crossover project is not really the difficult part. The hard part is getting all the intellectual property lawyers together.

Groo is back in the fray