Is this frog about to make an indecent proposal?

Fairy Princess Mercedes becomes Fairy Queen with the help of a... frog?

We get to see lots of video game graphics around here at the ESH news desk, but we rarely see any as potentially provocative as this one.

Now, of course, it can be interpreted in many ways, but it's not hard to see the comedic possibilities. I mean, what exactly could a frog want from a fairy princess? The Brothers Grimm would certainly have an answer for that one. 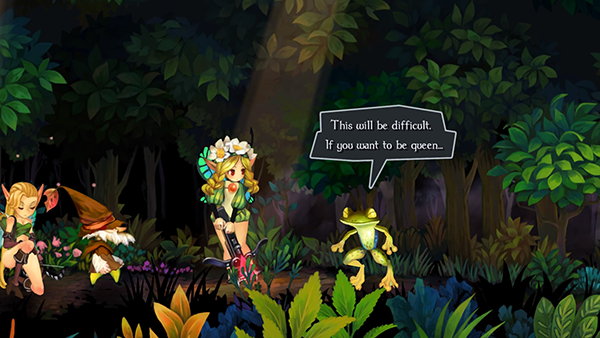 We swear, we didn't do any retouching to this image. It is just as it came to us. We would never put words in the mouth of a frog.

The image is from the game Odin Sphere Leifthrasir, which is first coming to Europe for the PS4, PS3 and PlayStation Vita. A 64-page softcover art book will be available initially. There's also the Odin Sphere Leifthrasir "Storybook Edition" premium version (limited to the PS4 version of the game) that includes a hardcover version of the art book, a special Potion Recipe T-shirt, a metal slipcase for the game, an art print and premium outer packaging.

But enough of the marketing stuff -- what's the story about? Here are the details from Atlus: "Mercedes' story is about great strength in the face of hopelessness. As a young fairy princess, the forest kingdom of Ringford is a carefree playground.

"But in an instant, the death of the great Queen Elfaria, her mother, at the hands of Demon Lord Odin forces Mercedes to assume the responsibilities of the kingdom on the brink. The newly appointed Fairy Queen must learn her place as a leader by waging war against Ringford's enemies, but then there's the matter of her overly ambitious cousin with his eyes on the throne...

"Mercedes' small stature and clumsy nature may lack the royal gravitas of her mother, but she'll command respect with her marksmanship. Mercedes' weapon of choice is her mother's Psypher crossbow, Tasla, which shoots out deadly beams of phozons to mow down those unlucky enough to be in her crosshairs. With Tasla in hand, Mercedes can take flight, skidding past enemies while shooting with her Slip Slide skill.

"She can also get the jump on foes by stunning them with Flash Shot, and use her Fairy powers to call upon some useful backup with Mandragora March. If players really want to unleash hell, her Brionac ultimate attack is a deadly artillery strike that can easily wipe out hordes of enemies.

"Will Mercedes be able to find the inner strength to defeat her enemies and become the leader that Ringford needs? Or will her life hang in the balance of the political machinations of her treasonous courtiers?"

Well, we're going to have to wait on all that. The game releases in June.