It’s hard out there for a disembodied head. But don’t worry, in Headlander you’ve got lasers and a voice in your head to guide you to freedom.

I spent some time playing Headlander a game that Adult Swim Games and Double Fine Productions have been working on – which releases this summer, so keep your eyes peeled for the launch date – where the protagonist of the game wakes up on a spaceship and finds themselves unable to speak. When you’re a disembodied head, you lack the lung capacity (or vocal cords) to make that work. But it’s ok, there aren’t any other people around to talk to any way. 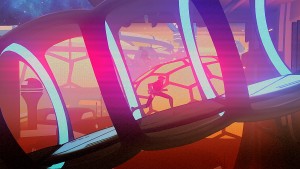 Headlander feels like an ode to 70’s Sci-Fi movies. From the moment the load screen appears and you see the logo – which instantly made me think of Logan’s Run – to the second you pick whether your character will be male or female, every detail of everything you see is retro inspired. This game is a joy to look at. The backgrounds are subtly detailed, and the environments are filled with vibrant, but warm colors. You don’t typically describe a side-scrolling, action-adventure title as “relaxing to look at” but Headlander is just that.

Playing the game is pretty straight forward, you must figure out how to move from room to room without taking too much damage from the Shepards – the robotic guards that will attack any foreign bodies they see – to escape to freedom. Now, while you are a disembodied head, you can take over the functional bodies of other robots you encounter. The demo that I played was on PS4, so the left bumper let me launch my head off a body and land on a new one, while the right one let me suck the head off a body in order to commandeer it.

There are different body types that you can take over which feature different laser-based weapons, and some non-laser-based weapons as well. The Electrosux cleaning robots can be usurped in order to enter areas undetected by the Shepards, but they too have a mission that becomes clear to you as you temporarily become one of them. 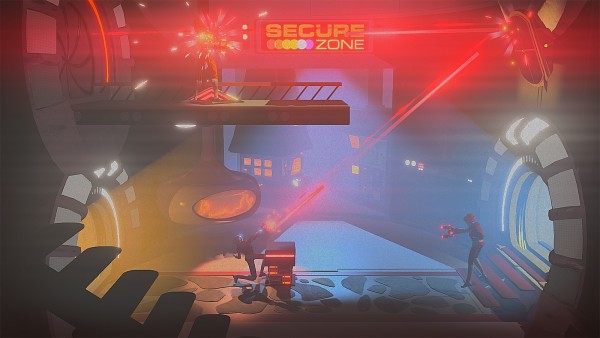 The in-game dialog is witty and funny, the visuals are stunning, and you can bounce lasers off the environment to take out enemies and open doors…and it doesn’t get much better than that.

Headlander will be available this summer on PS4 and PC/STEAM.