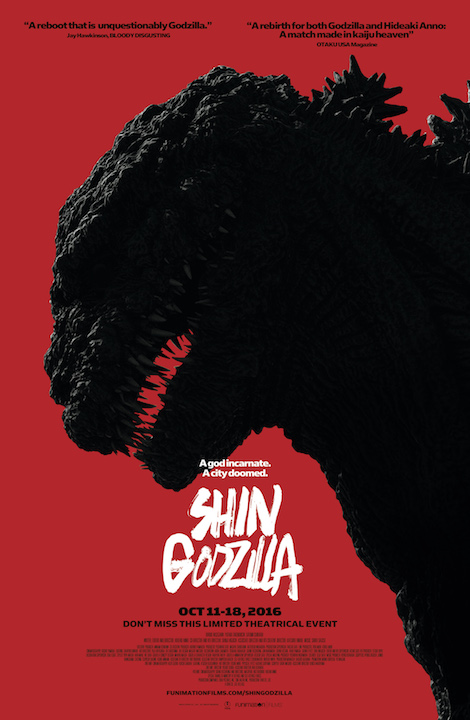 MOVIE REVIEW | "Shin Godzilla" Rises Above Others With Intelligence & Creativity

Gareth Edwards's Godzilla reboot was a return to the basics of what made the original 1954 film an enjoyable movie. While the focus was more fixated on the human characters, the massive reptile was met with excitement every time his scaly body made an appearance. However, unlike the original film, Godzilla was more paraded around like a savior rather than a threat.

Toho Pictures, meanwhile, wanted to remind its fanbase why Godzilla should be feared by all instead of cheered by onlookers. To do this, they called upon a writer/director who not only knows how to present disastrous activity with an artistic twang, but also can showcase the psyche of those needing to put a stop to it: Hideaki Anno (Neon Genesis Evangelion, Love & Pop). With his magic touch, Shin Godzilla not only mends both fantasy and reality into the legendary franchise, but also demonstrates the need for mature thinking when dealing with such a cataclysmic event.

Shin Godzilla wastes no time waiting around for the monster to show up. After a coast guard investigates an abandoned yacht, an infant monster emerges from the waters, wrecking havoc on and off-shore. The Japanese government wastes no time and begins to investigate the cause of the monster, as cities and neighboring towns are quickly evacuated. It's when the infant evolves into the iconic Godzilla we've come to know & love when things start going sour for Japan, forcing international governments to deal with the matter.

Most of the film focuses on the whys and hows of Godzilla's existence, with talks on how to deal with the monster in giant board room meetings and political conferences. Unlike the recent American adaptation, where firepower and a main hero seem to be the solution, Anno chooses to showcase the need for cooperation. Shin Godzilla doesn't really focus on one key person to solve everything; instead, it's the power of an entire government. This monster film put all its backing on a massive ensemble taking down a fire-breathing, laser-shooting fiasco.

It's why it's difficult to fish through the cast to seek the more powerful performances. Shin Godzilla plays it straight, without any sign of campiness whatsoever. While it's easy to recognize Satomi Ishihara as the fiery U.S. Special Envoy Kayoko Patterson or Hiroki Hasegawa's honest portrayal of Deputy Chief Cabinet Secretary Rando Yaguchi, they by no means steal the spotlight from the rest of the massive cast. In laymen's terms: everyone had a part to play, and did it to the best of their abilities.

However, it's very easy to shower praise on Mansai Nomura. His motion-captured performance as Godzilla was a great mixture of the practical effects of the classic series and Serkis-like realism. With the aid of co-director/VFX Shinji Higuchi (the live-action Attack on Titan films), Godzilla's presence is shown in such a way that it was sometimes hard to tell if it was CGI or an old-school rubber suit (spoiler alert: it was never the latter). Watching as entire streets, bridges, buildings, and neighborhoods are flooded, lifted from the ground, and crumbled gave Shin Godzilla a similar dose of production heart as its predecessors.

What works with Anno's interpretation is that there are no underlying subplots throughout the film. There're no love interest between Cabinet members, no renegade soldier trying to deal with the monster his own way, nor do we have an in-your-face moral-of-the-story that many American action flicks like to shove down our throats. Yes, there is the idea of nuclear power being seen as an evil rather than a good, but that's always been a theme within the Godzilla franchise. This film is about one thing, and one thing only: stopping the monster.

If you go into Shin Godzilla expecting nonstop chaos and kaiju insanity, then prepare to be disappointed, as roughly ¾ of it is a talking picture. However, what Anno's interpretation of the King of the Monsters' lore does is add both a rational and coherent mentality to dealing with the biggest of disasters. Sure, there's plenty of explosions and destruction, but it never reaches Hollywood-styled overkill. Instead, we are treated to what could be seen as the most realistic way of handling such a catastrophic creature. That is, of course, until the next time he emerges...

Promotional consideration made by FUNimation and Alex Munson of Rogers & Cowan. In theaters October 11-18.