With the launch of the PlayStation VR, Beijing's Oasis Games has already run out the gate with not one, but two launch titles for Sony's newest (and finest) accessory. The first I had a chance to sit down/stand up to play is a virtual throwback to the days of pixelated heroes and villains: Geronimo Interactive's Pixel Gear. Despite some of its flaws, this immersive realm managed to put a big grin on my face.

The objective of Pixel Gear is fairly simple: shoot everything that looks evil. With a PlayStation Move controller in hand, you are tasked to take out skeletal warriors, giant monster-like tanks, and even some mischievous bats that attempt to drop explosive pumpkins upon your head. As you play, you'll be able to upgrade to more powerful weapons, unlock hidden ghosts to take out, and even use some helpful abilities that make killing your enemies fairly easier. 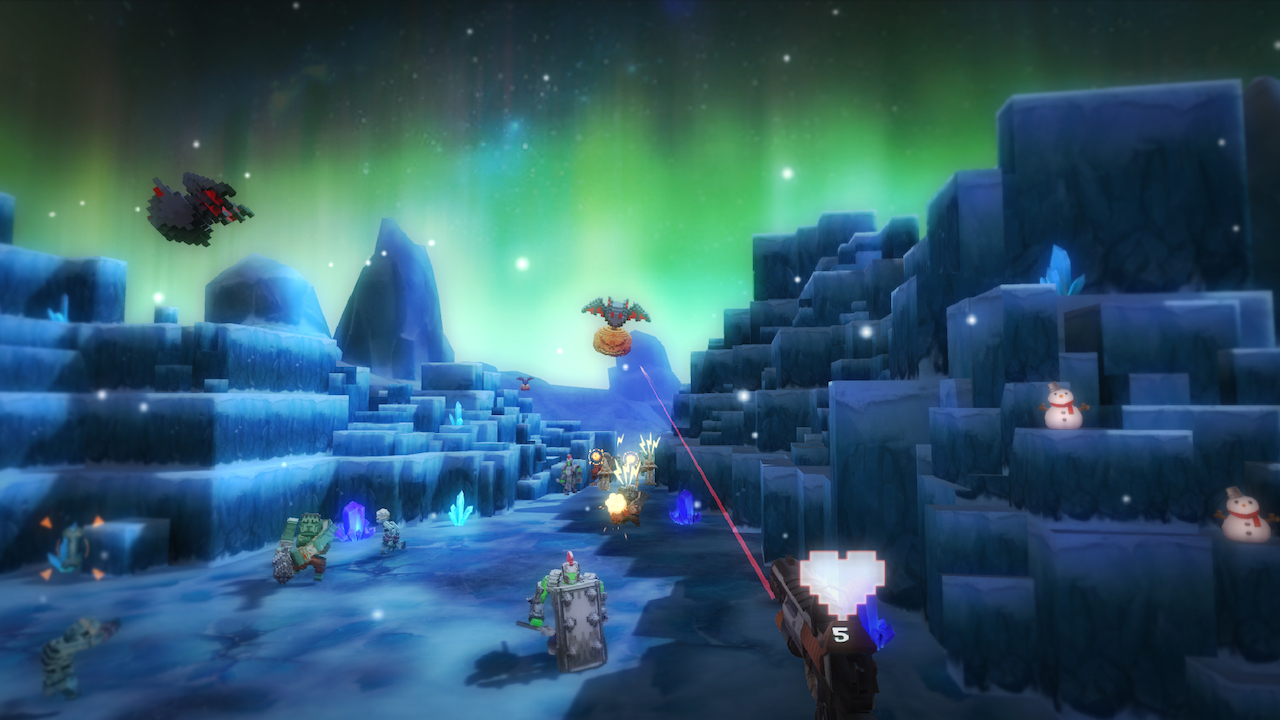 First off, the world of Pixel Gear is pretty cool in a virtual setting. While nothing much was happening behind me while I played, it was still awesome to sometimes peek behind my surroundings and see a vast world that looked to be in reach. Its 8-bit-inspired world was surprisingly detailed, with some nice nods to titles of old strewn about for good measure. In some cases, it gave off a Minecraft-like sort of visual appearance, especially when it came to the monsters that march through your vicinity.

Gameplay-wise, Pixel Gear is a lot of fun while being simple. Using your PlayStation Move controller, you simply aim at what you want dead, and keep on firing until the job gets done. These bad boys come in droves, and while they can sometimes be pushovers, the quantity of enemies that come at you at the same time makes it hard to pick and choose who goes down first. This often leads you to being unexpectedly attacked from above from vampire bats or below from the multitude of skeletons, monsters, and witches that roam your vicinity. 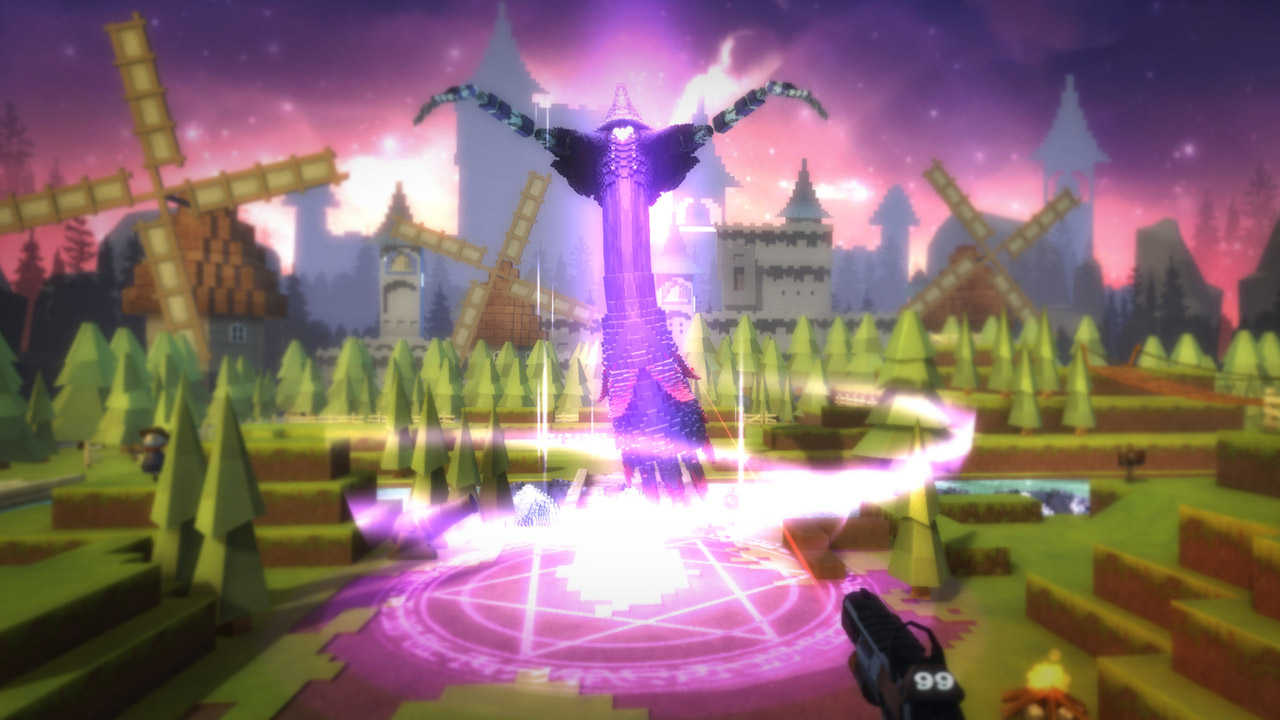 After a few waves, the real challenge of the game peers its persistent head. Giant bosses in the form of wizards, dragons, and titans attempt to flatten you like a flapjack, and with them often throwing in some extra enemy support, it makes taking out their small weaknesses a fair challenge. Yes, it's easy to figure out where to attack them, but even with that knowledge, you could very well meet an untimely demise thanks to its difficulty. Needless to say, the amount of challenge this game dishes out at you was a surprising relief.

In regards to its usage of the PlayStation Move controller, Pixel Gear mostly works with Sony's motion control accessory. Aiming and shooting at enemies during a normal wave, as well as toggling weapon switches and temporary power boosts, is fairly simple thanks to a well-designed scheme. However, I did notice during the dragon boss battle that the controller doesn't read as well when aiming above your head at the enemy. This would cause the gun to get stuck in a different area, resulting in some unfair death instances that forced me to restart the boss battle from the very start. 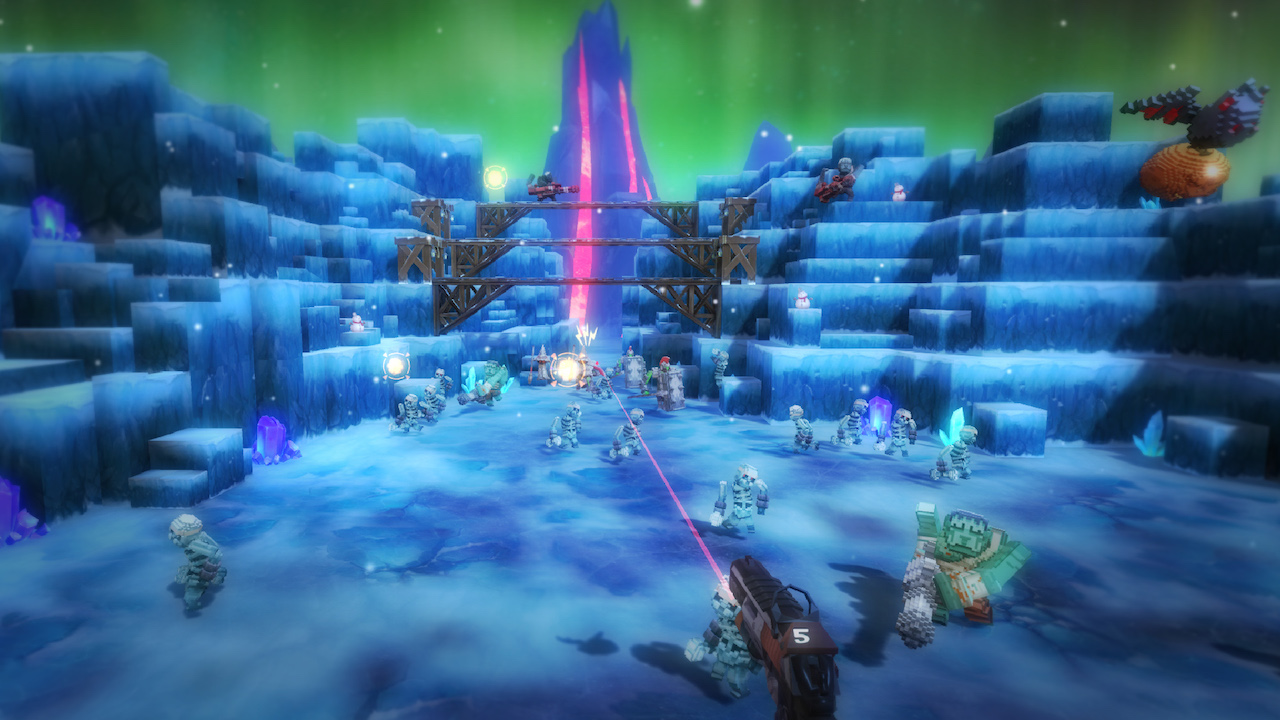 As of right now, Pixel Gear sports three levels, with a completion run time of just under an hour. It's very slim pickings, but hopefully more will be added later on in the long run. (Six levels were mentioned in the press release, so hopefully those other three will come out soon.) Still, if you are looking for a lengthy virtual experience, you'll probably be out of luck for quite some time.

While still somewhat feeling like a tech demo, I have to commend Oasis Games and Geronimo Interactive for creating a fun virtual shooter like Pixel Gear. With its retro-inspired graphics, multiple weapons & upgrades, and fun boss battles, this VR experience is definitely one that anyone can dive into and experience with glee. Here's hoping Oasis Games's other launch title -- Ace Banana -- will deliver a similar experience.

Promotional consideration made by Brian Lee of ONE PR Studio