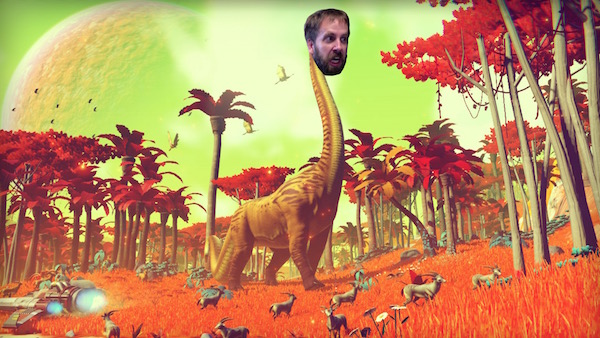 Hah! No, it was not a terribly quick platinum. In fact, time to platinum could vary greatly depending on your technique. One trophy in particular, a gold trophy titled "The Sentinel," tasks you with surviving on an extremely hazardous planet for 32 sols. In the original version of the game, you simply needed to survive anywhere at all for this amount of time, but this was perhaps a little on the easy side of things. Hello Games may have overcorrected in the current state of it. Now, you need to survive on one extreme hazard planet for 32 sols without ever returning to your ship at all. No problem, as you can simply get in a shelter and be fine, but 32 sols could be as long as 8 hours. I ended up timing out how long my life support would last, left it sitting and refilled as necessary to get this one. Fun times! All told, I spent more time than was necessary to get most of the others, but I definitely enjoyed exploring the various solar systems. (3 out of 10)

Again, this depends on the technique you decide to use. If you own a digital copy of the game, it's not going to be easy for you. Another change Hello Games made to the milestones involved discovering different animals. In the original version, you simply needed to scan any 60 animals. I estimate that they thought this may prove to be too easy, so they changed it. You now need to discover every different animal on 10 full planets. Let it be known that I gave this an honest shot, spending nearly four hours on at least one planet. That being said, almost every single time, there would end up being one animal type left and I ended up blasting off frustrated. What I ended up doing was disconnecting my PS4 from the internet, backing up my save, deleting the game and reinstalling it from the disc. This gave me the much easier original goal, but playing that original version did come with its own set of challenges. Nothing required a ton of skill, so hard might not be the right word, but it certainly wasn't easy either. (5 out of 10)

No Man's Sky haters are gonna hate, but I did have a good time with the game. The scope of the planet and joy of discovering different things kept me playing and smiling for a decent amount of time. This is not the last game you'll ever need to buy, like many people thought, but if you enjoy exploration games then there's a decent amount of fun to be had here. The two main trophies I've been griping about, "The Sentinal" and "Galapagos" respectively, are decidedly not fun and drag down the process of getting the platinum. (7 out of 10)

Often, I have a tendency to give the benefit of the doubt to games that are taking a beating critically. Once expectations are set properly, many games can be quite enjoyable for what they are and No Man's Sky is no different. I would still say that this game is an amazing achievement for the absolutely tiny group of people that made it. I'm proud to have the platinum for this game in my collection and look forward to more updates that Hello Games will add to this exploration odyssey in the future.

Resident Evil 7 brings back the bi...