The first installment was seen as a horror survival game that went above and beyond anything else at that time.  Resident Evil had enough memorable characters, twists and scares to gather a large popularity that propelled Capcom to make more games.  Resident Evil grew with the success of Resident Evil 2 and Resident Evil 3: Nemesis.  However, with repetitive gameplay and stagnant design, with the passing years, Capcom felt a cooling on the Resident Evil front and decided to switch things up in Resident Evil 4.  Resident Evil 4 introduced a faster paced game that had more action elements than previously seen.  Depending on how you view it, some people see this game as the downturn for the series, while others see it as a nice reboot.  Resident Evil 5 and 6 kept to the action playstyle in the horror setting but, in doing so, kept getting further and further away from what made the series so great:  Horror -- being scared.

Enter Resident Evil 7: Biohazard, and what a welcomed member of the family it is! Coming back to the roots of what made the series so great, and implementing current day technology and setting, Capcom has made another home run.  Moving away from the fast-paced, running and gunning gamestyle, we come back to the slow and creeping scare fest, but this time in first person.  Cutting away your peripheral allows you to become immersed in the atmosphere.  You feel a bit more vulnerable when you have a monster of Jack Baker in your face, trying to kill you.  Especially if you play the game with PS VR.  What Resident Evil 7 accomplishes the best is immersion of the player and pacing.  From the get-go, you are knee deep in the swamps of Louisiana outside of the Baker family's home.  You play the average Joe, called Ethan, who receives a phone call from his missing wife of three years.  Ethan's wife Mia tells him to come to the Baker house and pick her up.   As you approach the house, you get the impression that no one has lived here in quite a while, and then you see someone off in the distance.  The path leads you to the house, where you find an unlocked door and are met with a very musty and rundown plantation-style house with the door locked behind you.  Here you start your adventure with a slow and tense prologue.  The house itself should be classified as an enemy as it plays with your senses.  Each step you take, each item you come in contact with will make a noise.  The house creaks and bumps, and you are never sure if it’s just the house or a giant murdering monster waiting to kill you in the next room.  In the beginning, when all you have is a knife, your mind can go into panic mode.  Once you start to get your bearings, you are introduced to the Baker family with a “nice” family dinner. 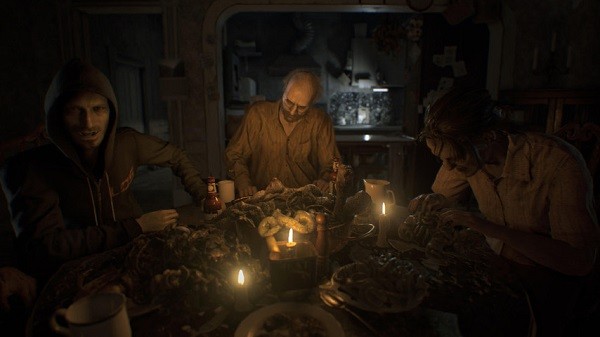 Jack Baker, Marguerite Baker and their son Lucas Baker --  three giant headaches throughout your adventure.  Right away, you notice something is not right with the family.  Self-mutilating and emotionally unstable, all three present a unique challenge for Ethan to overcome.  As you make your way through the puzzle-ridden house, each family member will try to stop Ethan in their own way.  Jack Baker, the patriarch of the family, hunts Ethan through the house, trying to impale him, forcing you to hide or fight.  You can knock him out if you shoot him enough times, but he won’t stay down for long and each bullet matters in this game.   Marguerite will stalk the halls and if she sees Ethan, she will send her nasty little minions after you, blocking off that specific route.  Lucas presents a challenge for the brain as he likes to use traps and puzzles to catch his prey.  You’ll have to overcome each of them as you search for Mia and discover what exactly is happening at the estate.

The pacing of the game can hit a snag when you are approaching a boss fight.  You can usually tell a fight is around the corner by the amount of ammo they lay out for the player.  The player has a chance to settle and center himself and go out guns blazing.  This gives it a bit more to of an action-game feel, rather than being scary.  This doesn’t really do disservice to the game in any way, but it does become more and more noticeable the further you get in the game.  The boss fights are fun and, at times, are over the top.  This pushes the player into action gameplay again, as each boss is very straightforward and a giant bullet sponge.

On the surface, Resident Evil 7 offers a great story and a suspenseful ride.  It can be enjoyed as a standalone game, but the more you dig into the story, the more becomes clear on how this installment fits into the Resident Evil lore.  As one of the trophies/achievements states, “The devil is in the details.”  Hardcore fans of the series will want to pick up and read every log entry and piece of paper you can find.   Past characters, places and incidents are mentioned, as well as clues to how Mia is involved with the mystery surrounding the house.  Depending on your playthrough, you can get one of two endings in the game.  I won’t go into spoilers for each, but both do leave you asking questions at the end of the game, while leaving a feeling of completion.  The answers are hinted at being promised in the planned DLC for Resident Evil 7, but we will have to see when they drop on the market.  All in all, Resident Evil 7 is a solid game with a lot to enjoy and scream about.  It may not be immaculate, but it is definitely the best entry in the series in a long time, and if the DLC comes through with what was hinted at, it could be a big gamechanger for what’s to come in the series.