Profoundly spooky locations and dark foreboding design are often the landmark for an effective horror game. What could be more terrifying than running for your life in a dark forest or an abandoned insane asylum? Bendy and the Ink Machine takes this idea and flips it on its head by providing an incredibly scary experience, while using graphics straight out of a cartoon from the 1930s. The first two episodes, that have been released thus far, are very short, but they manage to instill a sense of dread even while invoking those classic cartoons and they look damn good while doing it.

Receiving a letter from an old friend, Bendy and the Ink Machine starts with our main protagonist returning to the old cartoon studio where he used to work. Creepy and abandoned, the trouble starts as he investigates the giant ink machine in the office. The game does a good job of setting up the scenario in such a way that our reason for being there makes sense, but there's still a lot of mystery to uncover throughout the rest of the game. I won't go into too much more detail, but throughout the two episodes there are some disturbing revelations about what's been going on at the studio. 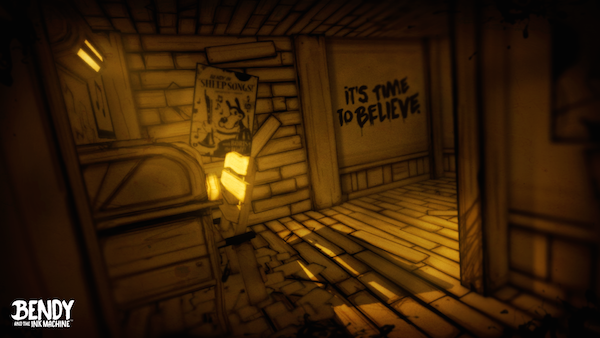 Ever since Slender: The Eight Pages, many horror games have ascribed to some similar tropes for how to progress the story. Find all of the things and the story can go forward. This is the general structure for the first episode of Bendy and the Ink Machine and it works well to introduce you with the world of the game, even though it is a bit uninspired. The second episode takes things a bit further by working some puzzles into the mix. You need to listen to all of the various audio logs to solve everything perfectly, which I always appreciate as it does a better job of drawing me into the narrative.

Even with such a short length and simple game mechanics, I was ready to forgive Bendy and the Ink Machine instantly with the rest of the design. The game looks absolutely fantastic, perfectly evoking the classic cartoon style of the 1930s. Every inch of the game is oozing with style from the look of the environments, to the superb sound design and music. While going back to those older cartoons has certainly been done before in games, it hadn't really been done before with horror. Everything from the environments to the characters manage to be both charming and unnerving at the same time, which lead to some tense moments and great scares across the two episodes. 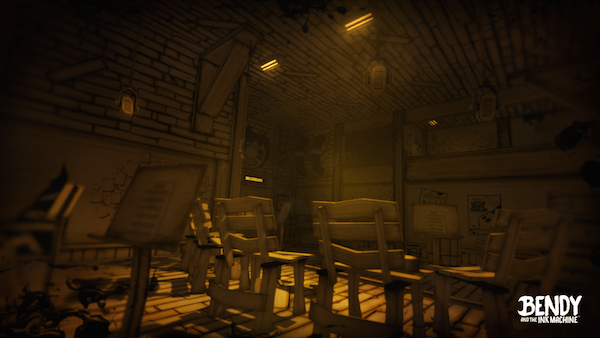