Mindlessly blasting baddies is always a good way to wind down when you're not in the mood for something a little heavier. Demon's Crystals is a twin stick shooter that's not looking to break any new ground, but the mechanics are just good enough that it's suitable for some short bursts of fun. Boasting a simple main campaign and six multiplayer types, Demon's Crystals doesn't have a lot of depth, but for the five dollar price tag, you'll get enough silly fun to last you and your friends a few nights.

Everything about Demon's Crystals is pretty simple. In the adventure mode, you're tasked with collecting crystals, killing enemies or a combination of the two. No matter what, the game spits baddies at you and your main task is to stay alive while completing your objective. The game also strategically doles out some special weapons and other items to assist with whatever goal you're working towards.

The difficulty curve feels pretty good throughout the adventure mode, but it also feels artificial. As you kill enemies and collect crystals, you gain experience and level a particular character up. You don't lose anything for dying, so no matter what you'll continue to expand your level. As your level rises, the damage that character does increases, so if you get stuck on a particular stage, eventually you'll be doing enough damaged for it to be easy enough to not matter that much.

After the first few stages of mindlessly blasting through the baddies, the Demon's Crystals ramps up an starts to demand a little more strategy. You might need to collect a bunch of crystals, but the time limit starts out pretty low, so you need to make sure to grab some time extensions while you're at it. Another level might have you needing to kill a bunch of enemies in a shorter amount of time, so the stage floods with goons and grabbing the weapon that shoots all around you is the way to go. It's not a particularly deep system, but it works for what it sets out to do. 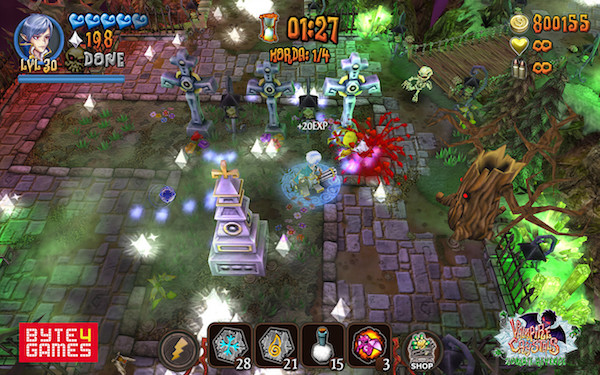 The multiplayer definitely has its positive notes, but I'm not a huge fan of every mode type. I won't get into every mode here, but my favorites are the survival and crystal modes. In the first, you simply need to last longer than you're opponents and collect more crystals in the second. There are also deathmatch modes where you're directly fighting the other players, but I'm not a huge fan as most of the weapons were designed to fight hordes of enemies and not just one other person. My favorite way to play with multiple people is cooperatively though, as you can complete the main adventure together with your buddies.

I'm really not sure what the developers were going for with the theming in Demon's Crystals. The enemy types include things like zombies, plants, jesters, bats and demons and it just doesn't feel cohesive. There's a short blurb explaining the plot when you first start the game up, but it's not enough to make the game feel like it has any kind of meaningful connection to any of it. The result leaves Demon's Crystals feeling profoundly empty and does little to help the threadbare adventure mode. 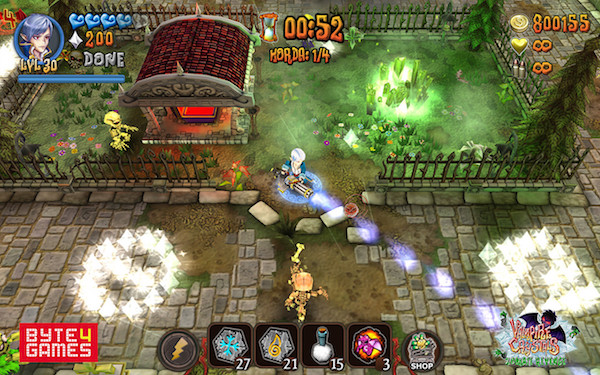 Any twin stick shooter eventually gets very hectic and Demon's Crystals is no exception. Unfortunately, because the game does little to explain itself, most of the learning the player has to do comes down to experimentation. It's easy to figure out most of the weapons, but the hectic mature of the game can make some of the items harder to discern. In particular for me, there were several times where I was trying to extend the timer and accidentally picked up an item that reduces the time instead. I still can't tell you the difference in appearance between that item and the one I was looking for, which is a major problem for time-sensitive stages.

Expectations can really make or break a game like Demon's Crystals. If you're expecting a grand adventure with a profound story and lots of depth, you're not going to find it. Instead, you'll find a cheap and mindless twin stick shooter that is fun to waste a few hours with your buddies. Demon's Crystals is available now for the PC, PS4, Xbox One, iOS, Macintosh, Android and Wii U.