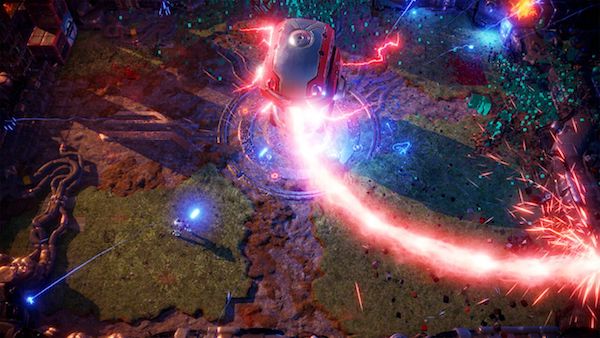 Developing one of the best launch titles for the PS4, Housemarque is back with its latest shooter. Nex Machina is a fast-paced shooter that tasks the player with both saving all the humans and blowing up tons of bad guys. Brighter, more colorful and jam-packed with voxels, Nex Machina is perfect for scratching the itch that Resogun left behind.

Housemarque has quite the pedigree when it comes to twin-stick shooters with games like Super Stardust HD, Dead Nation and Resogun under their belt. They taken many of the best things about their previous titles and combined them for Nex Machina. Saving humans returns from Resogun, but they've revamped the level designs to be much more vibrant and colorful. Nex Machina takes you through multiple themed worlds of twin-stick shooting, each with around 15 stages, and you blast away hordes of enemies all while obtaining special weapons and power-ups. 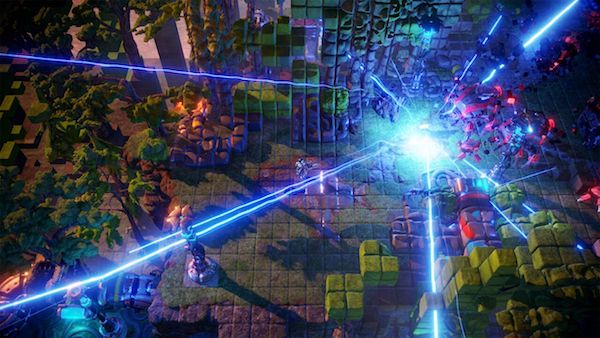 Voxels were a major focus of the visual design for Housemarque's previous game, Resogun. They've brought them back for Nex Machina and made them look better than ever. The enemies and environment are constantly exploding into piles of voxels. The slightly more monochromatic levels have been replaced with vibrant stages themed around things like a forest or volcano. Even though this visual upgrade is welcome, it can sometimes be hard to parse what's happening on screen in given moments. There's just so much visual information being provided that it's hard to keep track of where you are and what dangers need to be avoided.

Current games have a major issue with being way too easy. It's not necessarily that there's no challenge, but many games nowadays seem hesitant to really put turn up the heat. Nex Machina has absolutely no qualms about reminding you just how tough twin-stick shooters can be when you crank up the difficulty. The arcade mode in the game has you traveling through each world sequentially until you've conquered them all. I managed to get through the second lowest difficulty, which gives you 100 continues, by the skin of my teeth. If I remember correctly, I had less than 10 remaining when I finally took down the final boss. Needless to say, Nex Machina is a difficult game and you will be dying a lot. 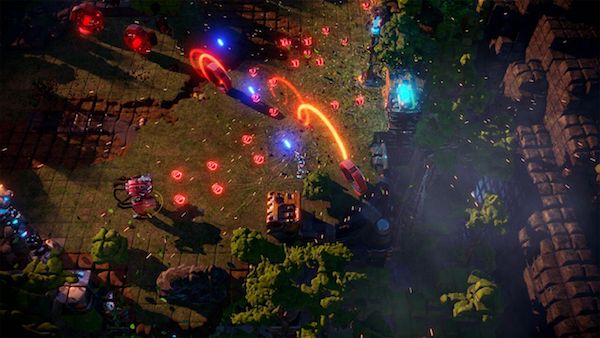 On the surface, Nex Machina seems fairly open and shut in terms of the content available. You make it through the arcade mode and then you're good to go after around an hour or so. That would be the case, but that's not really what any of these Housemarque games are actually about. Nex Machina offers up a whole slew of different goals that you can pursue in each individual level and across the game as a whole. My favorite challenge is trying to beat each of the worlds without saving a single human, which is much harder than it sounds on the surface. Completionists have a huge task ahead of them if they want to finish up everything to do and those higher difficulties start getting absolutely insane, so even beating the arcade mode fully is harder than it might sound.

Power-ups in games like Nex Machina are usually awesome, but mostly seem unnecessary to complete the game. I would happily shake the hand of anyone who can get past the final boss battle in this game without some kind of power-up. As you progress through each stage, if you manage to do well, or break certain containers, you can obtain special abilities. This might include things like being able to take a hit without dying, your shots going further, or it might be a special weapon. I had been so used to taking these for granted, that I barely used them on my first play-through on the easiest setting. The next time, I had to discover the hard way that the special weapons are integral to your success. 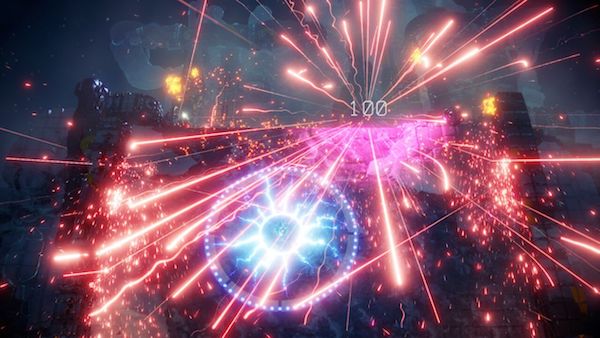 Many enemies take a bunch of shots to take down, but can be killed with one shot from a special weapon. Since you have limited time before being swarmed in many cases, this can be the difference between life and death. It's not new to these games at all, but it is the first time in recent memory that the difficulty in a game has forced me to learn more about the mechanics and actually get better, without holding my hand. There's something to be said for a game pushing the player to learn more on their own, which adds a lot to the overall satisfaction you can get from finally succeeding. If you're easily frustrated, it might not be the right method for you, but it feels great to experiment and find victory without the game standing there pointing an arrow at what you need to do. 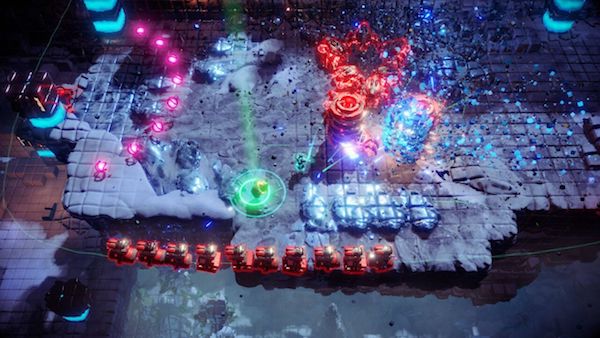 Many times across my experience with games, I have had to put some effort into completing the challenges they put forth. Nex Machina is among the few that have taken it one step further and actually made me doubt I had the skill to continue at all. Even so, I persisted and the thrill of winning was extra sweet. Nex Machina is yet another example of Housemarque's unyielding talent for creating superb twin-stick shooters. Nex Machina is available now for PC and PS4.

GAME REVIEW | More Wang For Your B...