HomePodcastESH Cast #572: We play DropMix like most people play Monopoly — we just make up the rules
Podcast

ESH Cast #572: We play DropMix like most people play Monopoly — we just make up the rules

Never let the rules get in the way of having a fun time. That's the lesson we keep learning as time goes on.

Panda discovered that for herself when she was introduced to the music-mixing game DropMix on Thanksgiving of last year. Why worry about the game when you can have a blast making music mixes?

And although her husband originally feigned disinterest in the game, Panda reveals in her review of the program this week that he's been buying extra cards to make new mixes for the game.

And that's just one subject in this week's show. We get to hear new information about Red Dead Redemption 2 -- and you can't talk about Red Dead unless you spend a little time talking about Grand Theft Auto. They discuss the new God of War game coming April 20, the upcoming movie Black Panther and the anime will the nearly impossible title Death March to the Parallel World Rhapsody.

And our title refers to the fact that, like Panda plays DropMix, nearly everybody in the world plays Monopoly with their own rules. As an example of that, just look at the picture we found for this story. In this picture, there are two Monopoly rules being visibly broken. Can you spot them? (See the answer at the bottom of this post.) 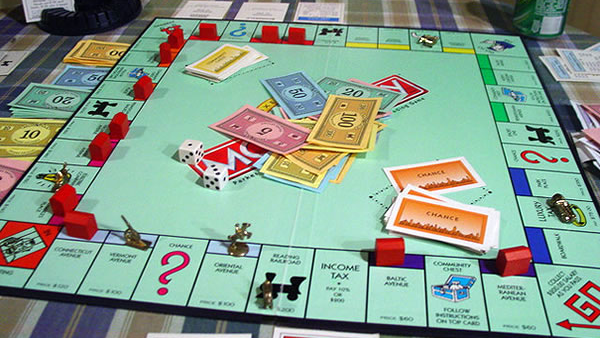 While you're working on that, give a listen to this week's show ESH Cast #572: We play DropMix like most people play Monopoly — we just make up the rules.

Answer: There are two Monopoly rules being broken in this photo: 1, Loose money lying in the middle of the board indicates the players distribute that money to the person who lands on Free Parking, but that's not an official rule. Free Parking is only free parking. 2, Note the number of hotels on the board. There are a maximum of 12 hotels that can be used in a Monopoly game, but one player is using extra tokens as hotels on the Light Blue color group -- another thing that's against the rules.