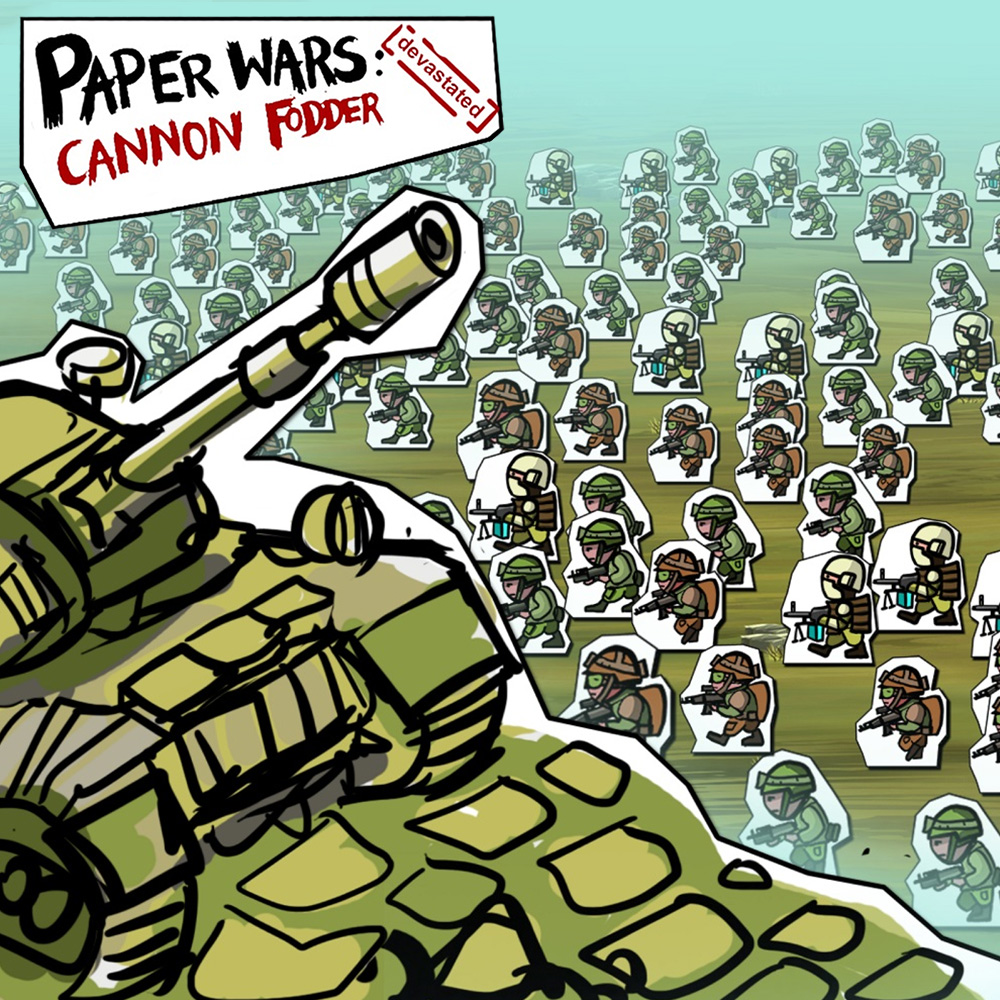 I'd be called a liar if I said that there was something lying deep in what iFun4all was trying to tell its players with Paper Wars: Cannon Fodder. The simplistic aim-and-explode is a game that doesn't dive into the whys and hows of the battlefield, nor does it showcase the consequences of tearing down countries or present the faces of those who've been ravaged by battle. Instead, Paper Wars gives players the chance to blow off some steam after a long hard day of work (or, in my case, deal with my frustrations caused by a near-impossible lock-picking tutorial via a certain 15th century-based RPG). Nevertheless, this game exists, and I'm kinda glad it does.

Originally released on the PSP and Wii awhile back, Paper Wars: Cannon Fodder Devastated comes onto the Nintendo Switch in a completed state with some extra goodies. Players will have to protect their map by blowing away soldiers and vehicles of different strengths, either defeating as many of them as possible or survive as the clock winds down before too charge into your ranks and blow up your missile launcher. With the press of a button (or a poke of the screen, if playing in its portable mode), players can lay waste to plenty of soldiers, initiate bonus weaponry like land mines or an air raid, and switch missiles depending on what you wish to deal with. 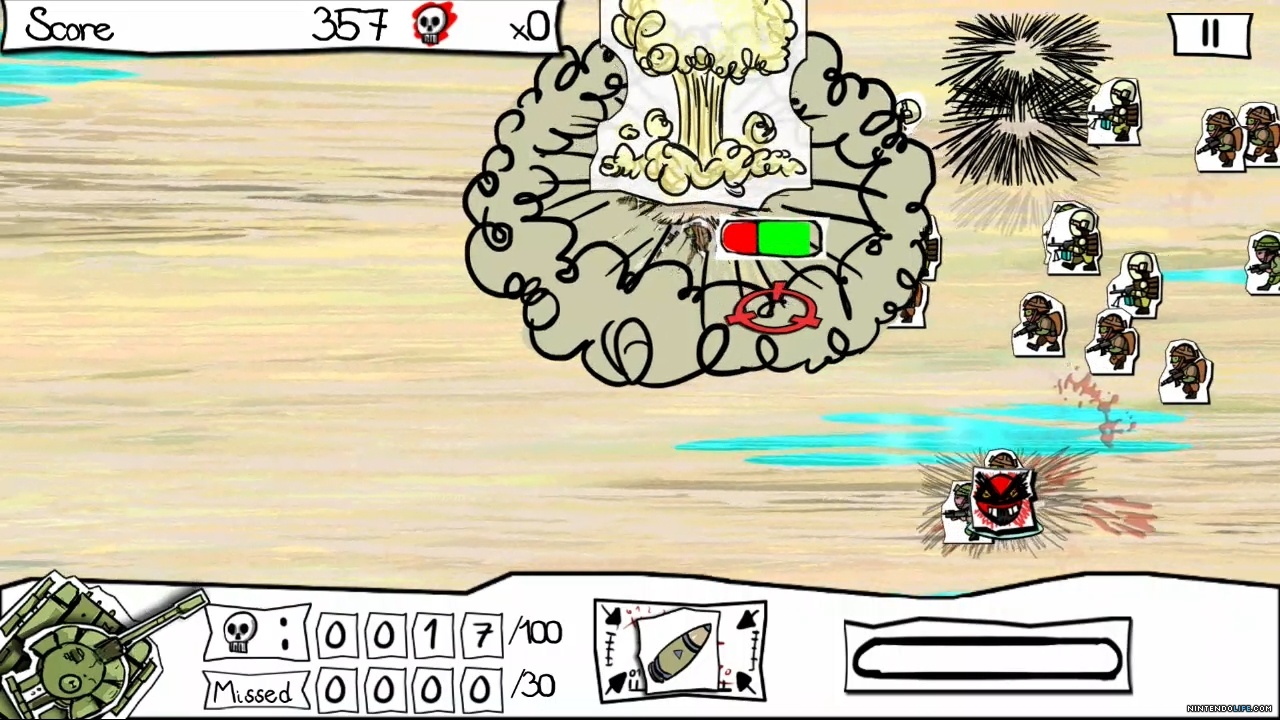 Paper Wars is the kind of game that lets you enjoy what it delivers without thinking too much about it. Yes, there are some strategic aspects in some levels that will require faster fingers or a keen eye (especially for the ones dealing with killing specific soldiers), but for the most part it's here to let you watch childlike drawings of soldiers be blown to smithereens! And to be frank, there's a surprising amount of fun that iFun4all delivers with this missile command/tower defense title. With that being said, it can get a tad repetitive after awhile if one were to marathon through it.

This is the sort of title you pull out when you need to a kill a few minutes before a shift or during a break, hence why it works well when in its portable state. The precision placed in the touchscreen controls was surprisingly on-point, with every aspect I was trying to target delivering a solid hit each time. It's also fun playing in portable mode with the vibrating controls, as each explosion shook the console as if I was feeling an aftershock effect close by. Playing via your TV is also fun, but it's a tad more immersive and interactive when you have it on the go. 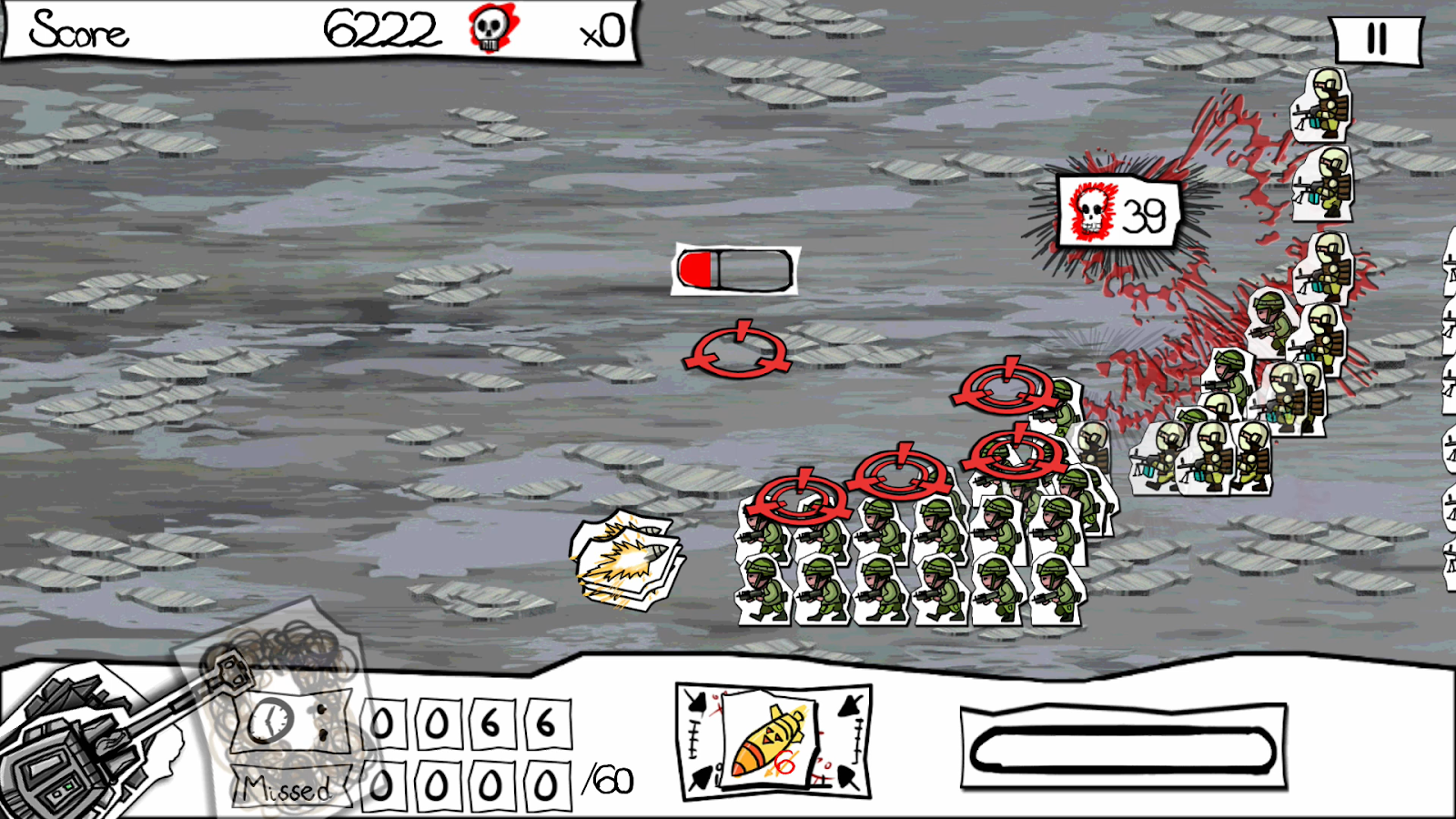 Overall, Paper Wars: Cannon Fodder has a decent amount of fun blasting through, but I can't help but think that this game would've been more suited on your iPhone or Android. It's not that it's lacking in presentation, but the gameplay style that it delivers is very much more in vein with an Angry Birds or Bowmasters than a bigger, albeit indie console game. Then again, like these titles, it does deliver a good amount of fun in small, appropriate doses, even if it can get a bit bogged down by the lack of variety in its gameplay.

Hence why this Switch version has its share of nice bonuses. Included are a Survival Mode for each story mode and a Zombies campaign that has a bit more fun with its characters than the original version. While it doesn't really offer anything new to the formula, it's still a good amount of fun to be had. You can revisit older levels to better your score, but considering there isn't a way to compare others' points, it's kind of moot to do so unless you're trying to earn the highest medal possible.

Paper Wars: Cannon Fodder Devastated may lack deep gameplay or storytelling, but it has its playful moments. Better in small doses than marathon sessions, iFun4all gives players a chance to just blow up cutesy soldier characters without having to use too much brainpower. For a game whose past incarnations were advertised as the "worst game ever," I would respectfully disagree, as there have been many a terrible game I've played that didn't have as much fun with its mechanics quite like Paper Wars.