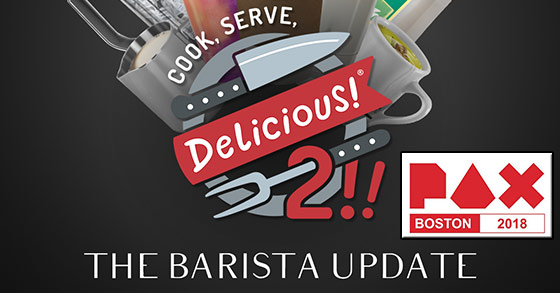 Calling all Baristas- it is your time to SHINE!

At PAX EAST 2018, Vertigo Games announced an update coming to its CSD sequel. This free update introduces a staple in the lives of many: coffee shops.

Cook, Served Delicious 2 is a restaurant simulation game. It released on September 14, 2017. Vertigo Games developed and published it for PC, and Mac. The game is planned to be ported to PlayStation 4, and is the sequel to Cook, Serve, Delicious!

The player is the principal operator for a small restaurant. The player's goal is simple: survive the workday. This isn't an easy feat as it requires the player to press controller buttons in a sequenced order at a rapid pace.

For updated information regarding the Barista update- visit: http://www.cookservedelicious.com/main/
.