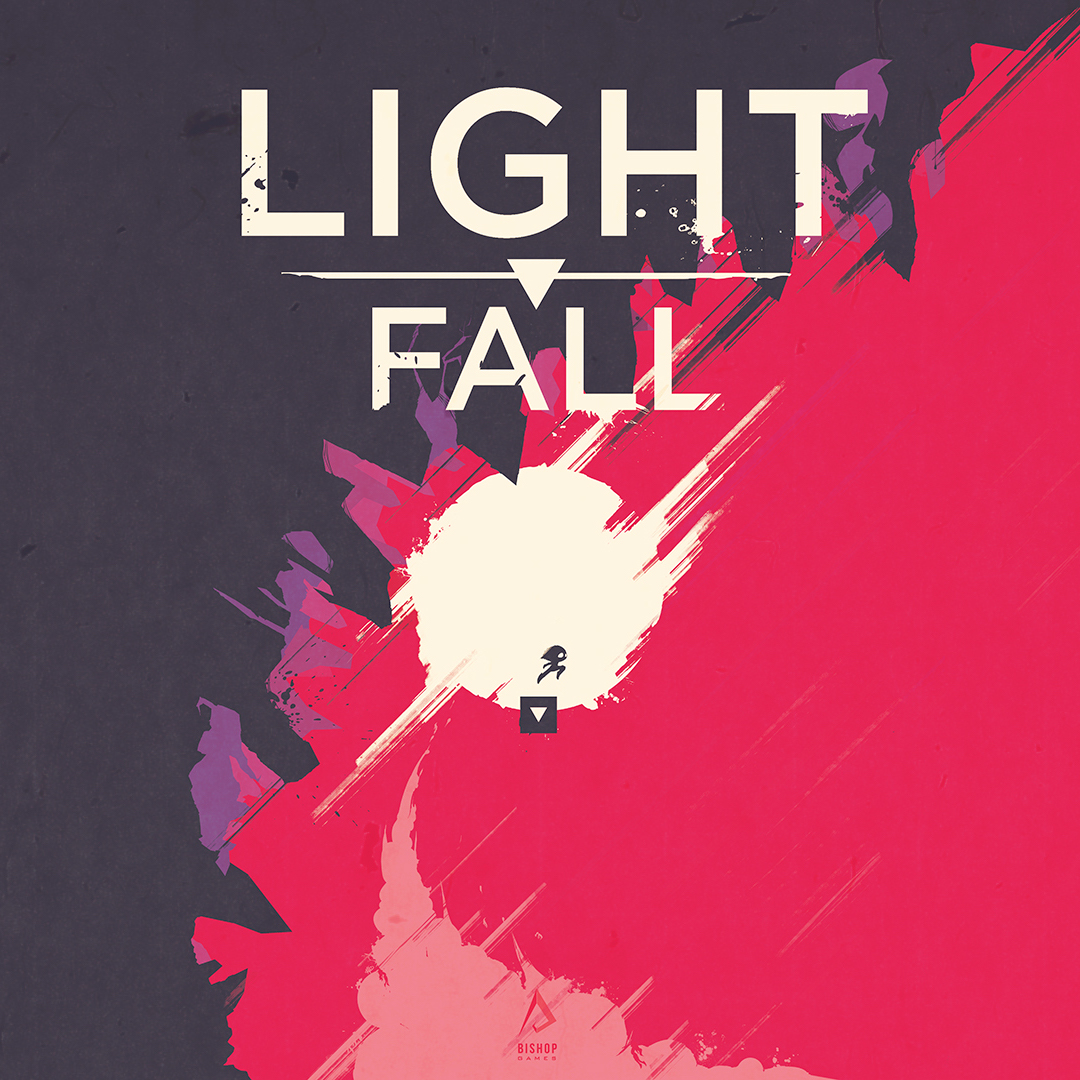 Sometimes a game doesn't need much to be memorable. All one needs is a simple premise that's tinkered to its very limits. Titles like Limbo and Badland showcased this wonderfully with dark tones and a unique story that slowly revealed itself as you progressed. Bishop Games' Light Fall, which was successfully funded through Kickstarter, also belongs in that pack, as it takes an easy-to-learn gameplay mechanic and forces you to be quick on your feet with it.

Taking place in the shadowy world of Numbra, Light Fall has you attempting to survive the world's treacherous areas while learning how to use a mysterious object known as the Shadow Core. With it, you'll be able to reach higher levels, block off dangerous hazards, and even defeat ginormous enemies that stand in your way. With the aid of a grumpy old owl named Stryx, the path you take will be either paved in hope or drenched in disaster. As the lands around you start to crumble, it becomes a race against time to rescue your surroundings from the darkness that's cursed this land. 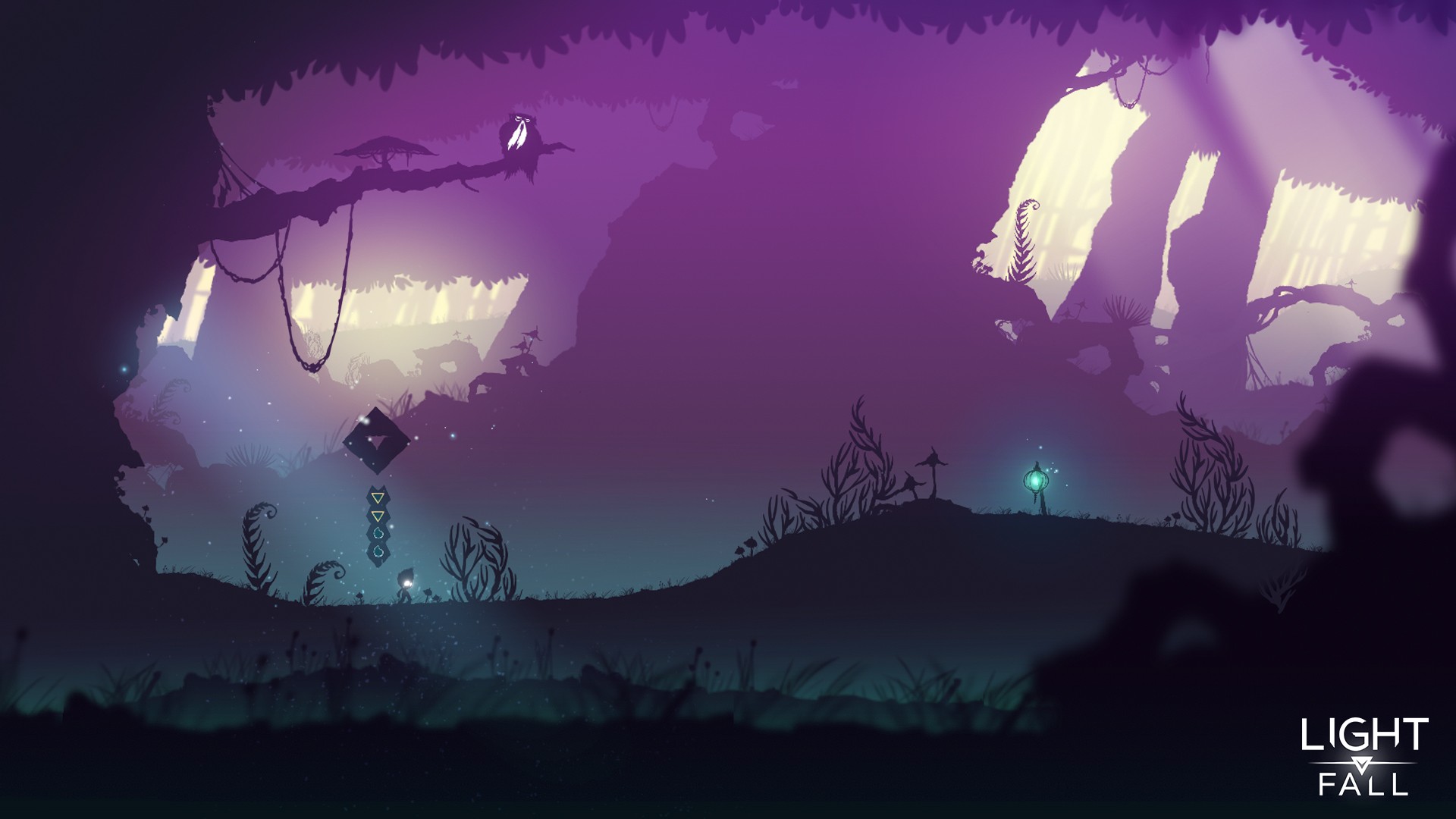 The game starts out rather simplistically, as you become accustomed to the new world around you. As Stryx narrates your journey, you quickly get a sense that there's something big that's about to happen. What starts as a relaxing exploration game suddenly becomes a rough 'n' tough challenge to avoid certain death, with new abilities slowly revealing themselves as you progress through. It becomes apparent once your journey truly starts out that nearly everything around you wishes to destroy your well-being, forcing you to come up with various strategies to take on what's ahead.

Of course, Light Fall could've easy made this a game that had you stop once and awhile and study your surroundings. For those looking for such a breather as to ponder over a solution, I'm sorry to say that there's little-to-no time to think ahead and avoid dying along the way. Bishop Games has made it so that if you wish to make it to the other side, you'll have to bite the dust over and over again until you can quickly master the terrain that you're on. This becomes very apparent when you come around any of the boss battle areas, with death meaning you'll have to start the fight right from the beginning. 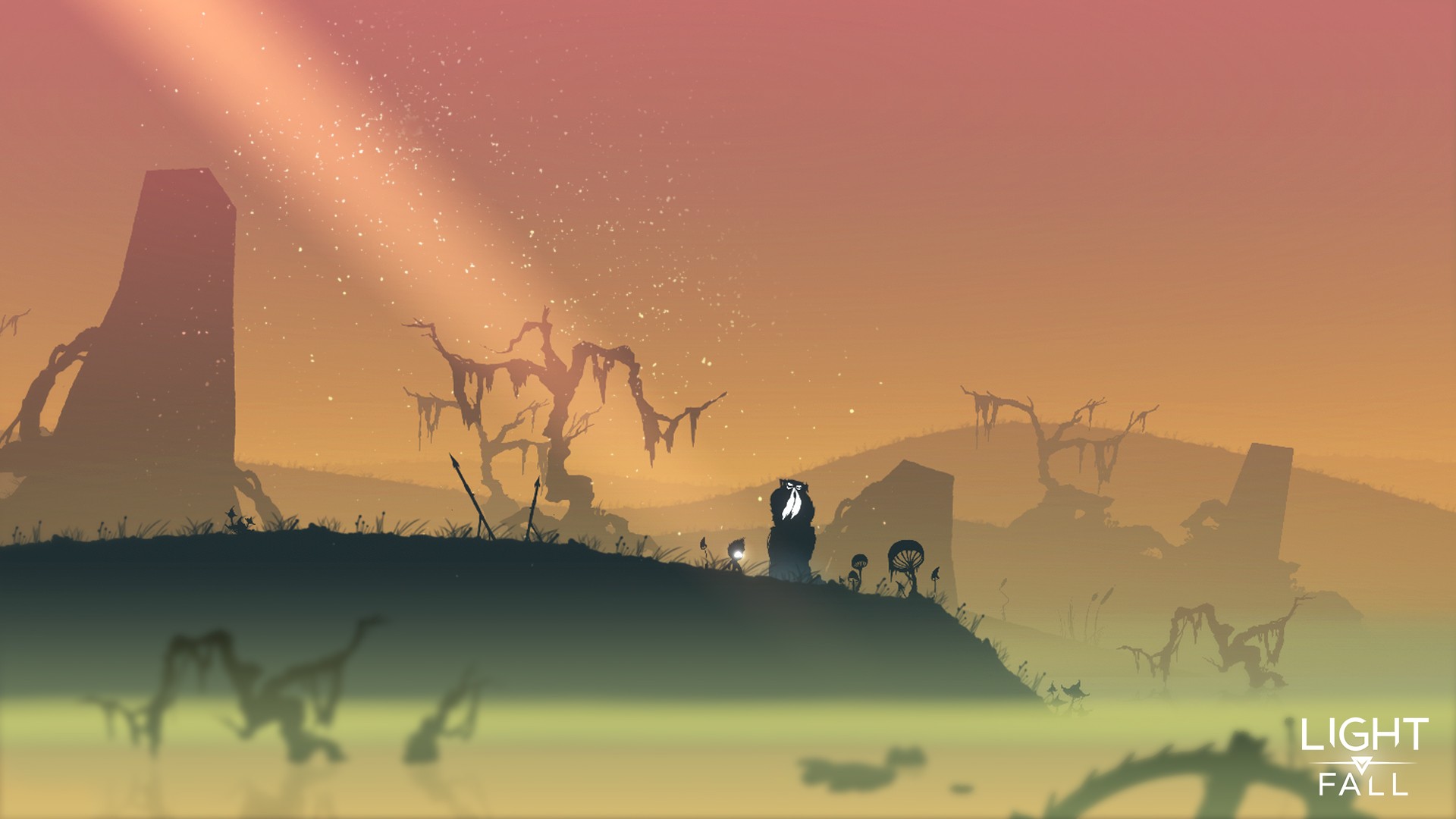 To many, this will lead to much frustration. (Hell, even I'll admit that I screamed at my TV after dying for the umpteenth time!) However, it's when you actually solve the area when a euphoric feeling appears deep within yourself, almost as if your essence is telling you that anything is achievable! It's that sort of feeling that makes Light Fall not just a joy to play, but somehow gives your in-game accomplishments a nod of importance into your gaming life. In a way, it's sort of therapeutic, one that teaches you to push through the impossible and discover something gorgeous on the horizon.

Speaking of which, despite its simplistic side-scrolling mechanics, Bishop Games has crafted one beautiful-looking indie. It's hard to not take in the views of your surroundings, be it the mountains and landscapes or the crumbling buildings that once housed large populations. Also on-par is its soundtrack, created by Jean-Philippe Tessier (AKA Jupiterion) that fits well with the ominous tone that the adventure is laying down upon you. Even as you find yourself dying over and over again, you will still be mesmerized by the sights and sounds that this game delivers. 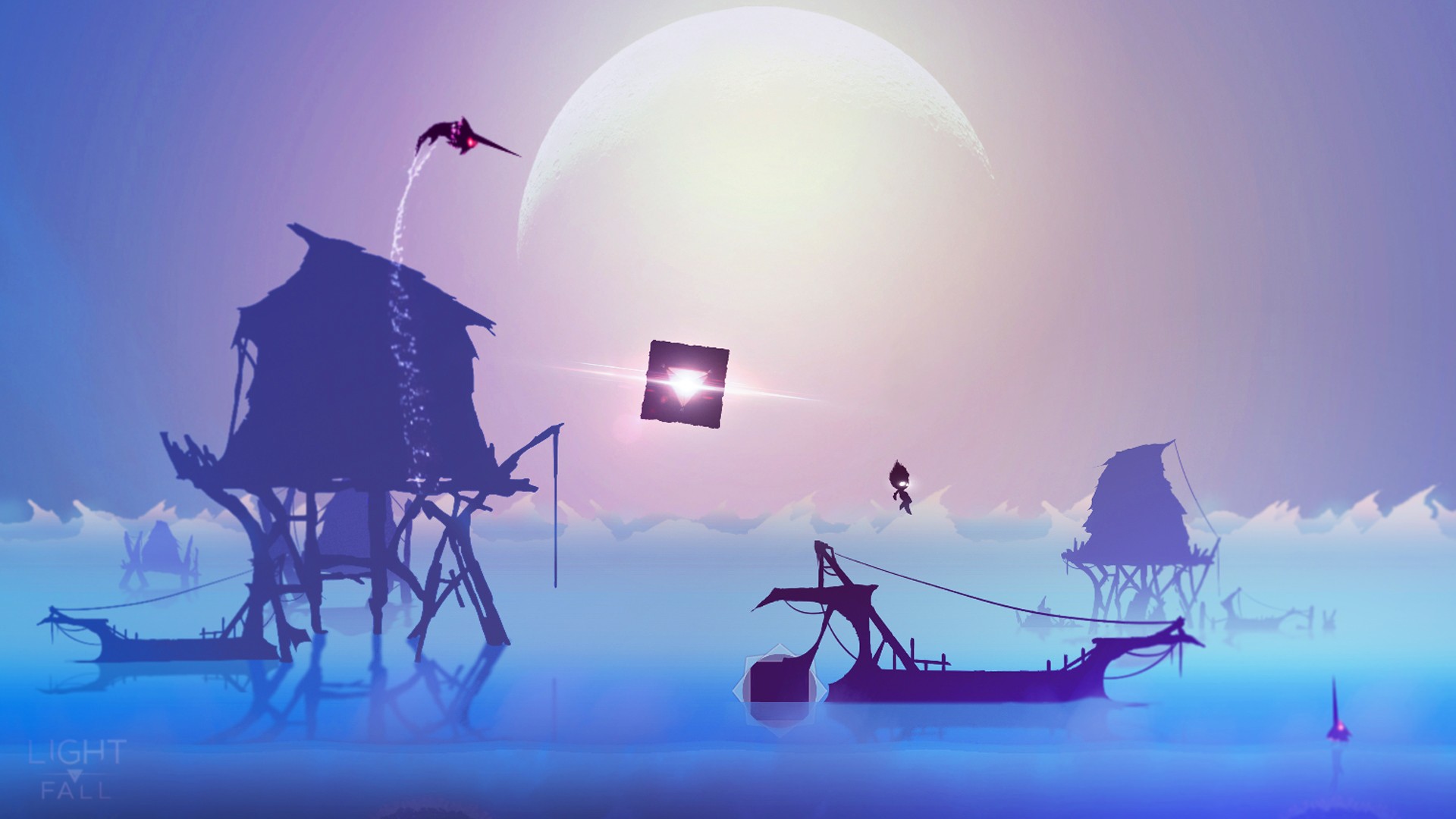 Despite being a very tough game, Light Fall is very easy to learn. Maneuvering and calling upon the Shadow Core does take a bit getting used to, especially when it comes time to use multiple versions of it in a split-second. Thankfully, it never gets too complicated that it causes you to screw up a button command during an intense moment of the game. However, it should be noted that there may be some button-mashing involved, so it's best to prepare yourself to take a break from time-to-time.

Being the kind of game it is, it's not without its share of flaws. For starters, the rise in difficulty does come out of nowhere, which may result in some frustrations that will surely have certain four-lettered words spewing out of your mouth. One other issue I came across was its checkpoint system, which has no way of re-igniting past points in the oft-chance you go back to certain areas. It may sound like a weird complaint, but in one instance I found myself revisiting an area and igniting a hidden checkpoint. Because of this, when I died during the boss battle fight, it would send me all the way back to that checkpoint instead of the one that's literally right outside of the boss's walls. (Perhaps a patch could fix this error, but we'll have to see.) 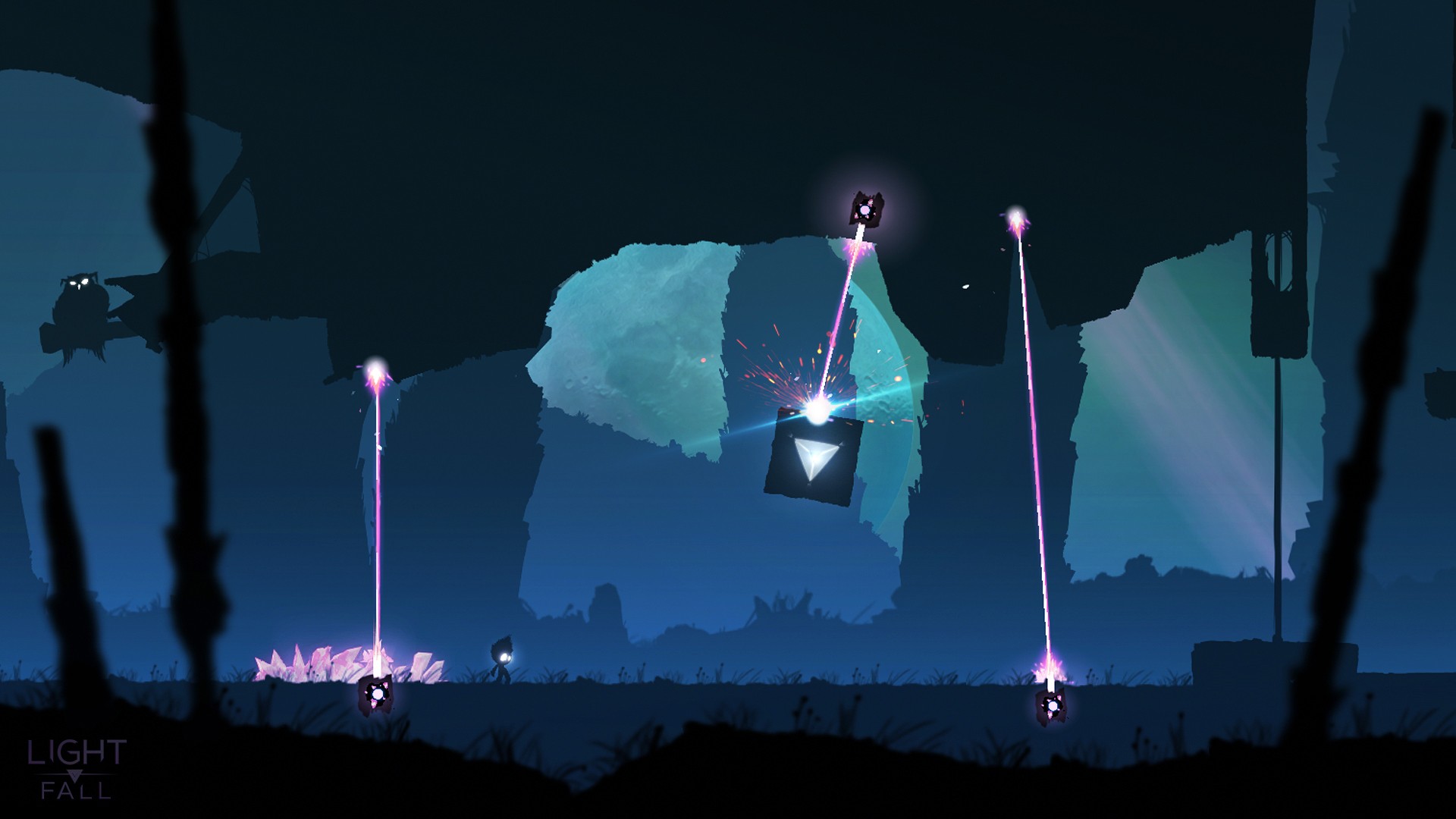 Beating Light Fall will take you roughly 9-10 hours, depending on your skill levels with this sort of game. As there are many hidden items to be found, you'll more than likely want to revisit past levels and seek out the missing Easter Eggs. (The back story that's hidden within takes a bit to figure out what's going on, but trust me when I say it is quite the clever and poignant adaptation of a certain historical event.) Players will also be able to try their hand at Speedrun modes, which could help to make this little indie darling quite the competitive force at any upcoming gaming tourney.

Light Fall might not look like much from the get-go, but its story, gameplay, and challenges make it one title that you shouldn't scroll past. Thanks to its wonderful art style and its problem-solving style of platformers, Bishop Games' debut title is one that will certainly give them much attention in the long run. Although heed this advice: don't play Light Fall in the Switch's portable mode, as you might have to fight off the urge to fling it across the room after you've failed an area so many times!

Promotional consideration provided by Jenny Cabral of Uberstrategist. Reviewed on the Nintendo Switch.