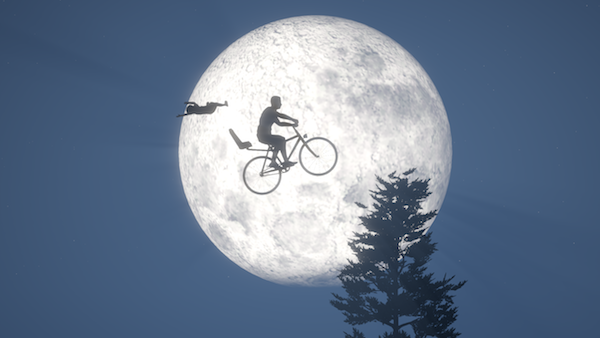 Video games are often made with a very specific purpose. Some are designed to be played all by yourself on a dark stormy night. Others are built to be played with friends either cooperatively or competitively. Ever since streaming became a bigger part of gaming, a new type of game has emerged: one that you are meant to watch. Guts and Glory is one of those games that begs to be spectated as you accidentally eviscerate a man riding his bicycle through a gauntlet of buzz saws and land mines.

Generally, my spouse does not enjoy watching me play games, since she would much rather be participating than spectating in something like a Mario Kart game. One day, as she arrived home, I was playing Guts and Glory and she decided to sit down while I finished up. As I failed tracks, getting my on-screen character horribly mutilated, she started remarking about how mean I was being to my character. She continued to watch and admitted to enjoying watching me fail or narrowly succeed at the challenges. This speaks to the broad appeal that Guts and Glory can offer for someone watching. This makes it the perfect game to stream, so that strangers can spectate as you get dive-bombed by a truck with a kangaroo riding on the back. 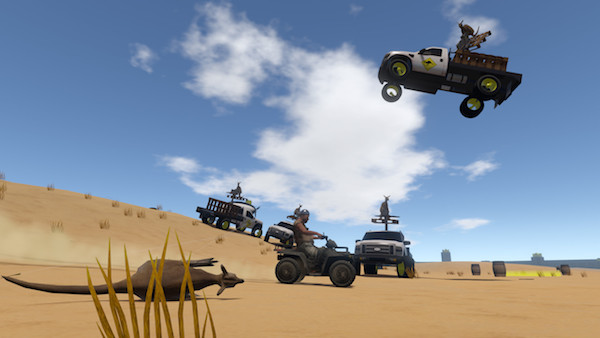 The base setup for Guts and Glory is that you are trying to guide your character from checkpoint to checkpoint in an increasingly-hostile level until you reach the final one. The different vehicles, all with people modeled on or inside of them, are anything from a simple bicycle to a full car. Each stage is filled with various traps that need to be navigated and it doesn’t take much to create a very nasty end for you. The vehicles and people are all destructible, so when you ride too close to a buzz saw, both you and your bike get cut in half. The gore that goes along with this is part of the spectacle, with blood and guts spewing everywhere, but if you’re not into that as much, it can be turned down or off.

Surprisingly, which character you pick at the beginning of each stage can make a huge difference. Each of the vehicles have very different acceleration and top speed, but even the size of your vehicle can make a big difference. Some courses restrict you to a single characters, as there is a bit of flavor text describing the “story” that goes along with that level. I tried to pick the corresponding character when I could, but sometimes the controls were just too horrendous for me to manage. In particular, there is one character who is just a man with rockets mounted to the bottom of a lawn chair. He can fly, but I was never able to master it very well. In this instance, they offered one other flying character that works well, so it wasn’t as big of a deal. In another mission, they force you to be the convertible that does not have great acceleration in a stage that demands good acceleration. I still have not beaten that level and I no longer care.

It sounds kind of mean when I say that this game is broken, but it’s not all a bad thing. There is kind of a charm to the quality and amount of the glitches I encountered while playing. Sometimes this involved being launched way into the air and other times spawning already dead back in my vehicle after a failed attempt. These more innocuous glitches just add more funny moments to an already very silly game. Others, like randomly having my car pop onto its side during a difficult section, are less charming and more infuriating. There are definitely sections of this game where it felt like it wasn’t skill, but bullshit that was keeping me from progressing. Getting stuck on particular levels until I nearly felt like quitting happened more times than I would have liked.

If you’re looking for a highly polished game that feels great to play and immensely satisfying to complete, you’ve found just about the opposite here. Still, turning it on for just a few laughs on a stream or with your friends, then Guts and Glory definitely has you covered there. If you’re looking to see a man on a bicycle get cut in half and then explode, I guess it has you covered as well, but you might want to examine that about yourself. Guts and Glory is available now for PC, PS4, Xbox One

Review code provided by tinyBuild for the PS4 version of the game.