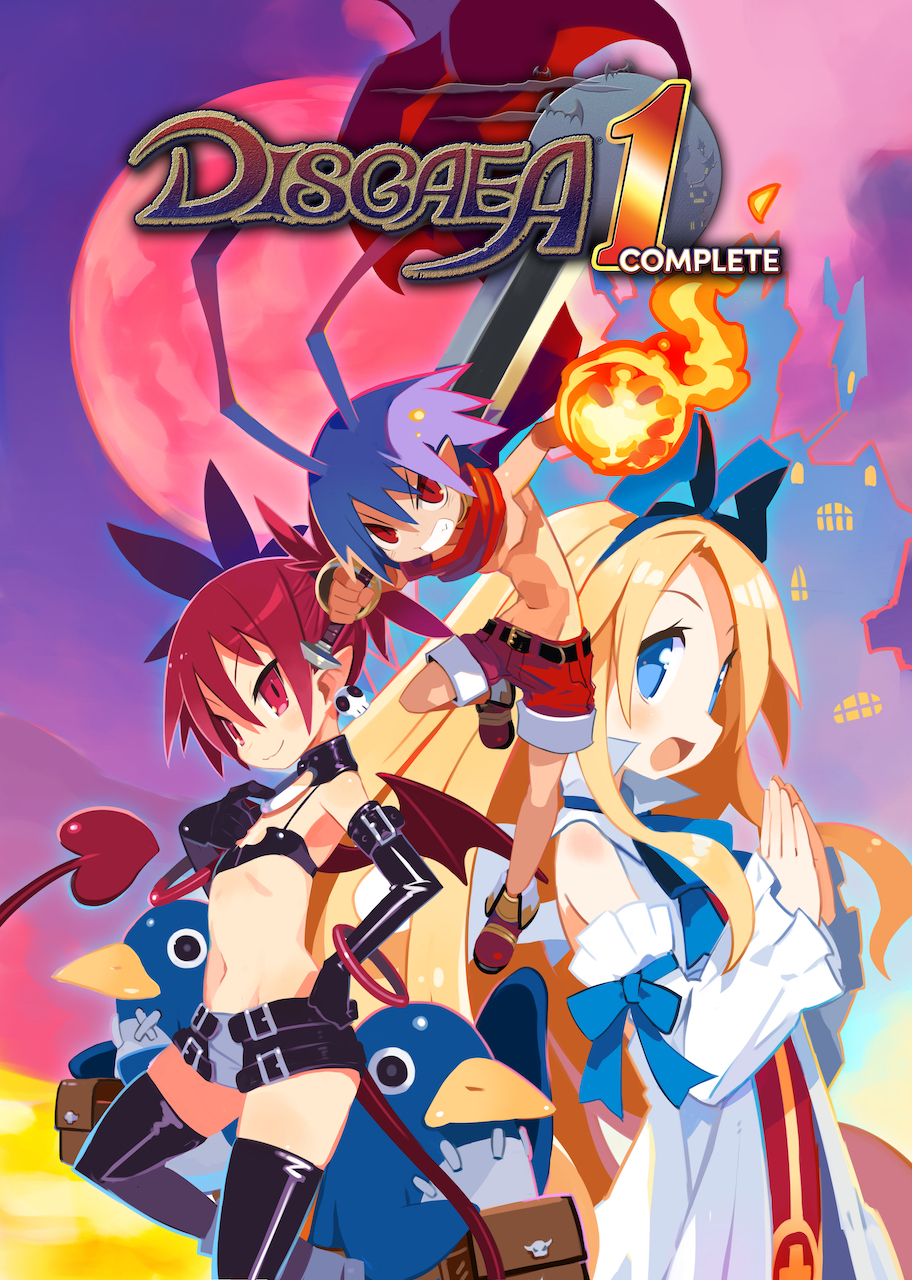 For the last fifteen years, the Disgaea franchise has entertained millions of fans worldwide, leading to spinoffs, anime adaptations, and even the occasional Prinny-friendly merch. However, although many a protagonist has made their mark on this series, no one can hold a candle to the likes to the Overlord Prince Laharl. Knowing this, Nippon Ichi Software saw it best to bring back the adventure that started it all, in the form of Disgaea 1 Complete.

Retelling the story of Hour of Darkness, Disgaea 1 Complete has you take control of Laharl after he's awaken by his vassal (and forever Best Girl of the series) Etna. His father King Krichevskoy has died due to embarrassing circumstances, meaning many of the Underworld's heavy hitters are fighting for his crown. Pissed off that almost everyone has forgotten about his existence, Laharl and Etna -- along with the angel Flonne -- set off to lay claim to the throne that's rightfully his. However, with many a foe and an annoying Midboss in his way, reaching the top of the food chain once more will be easier said than done. 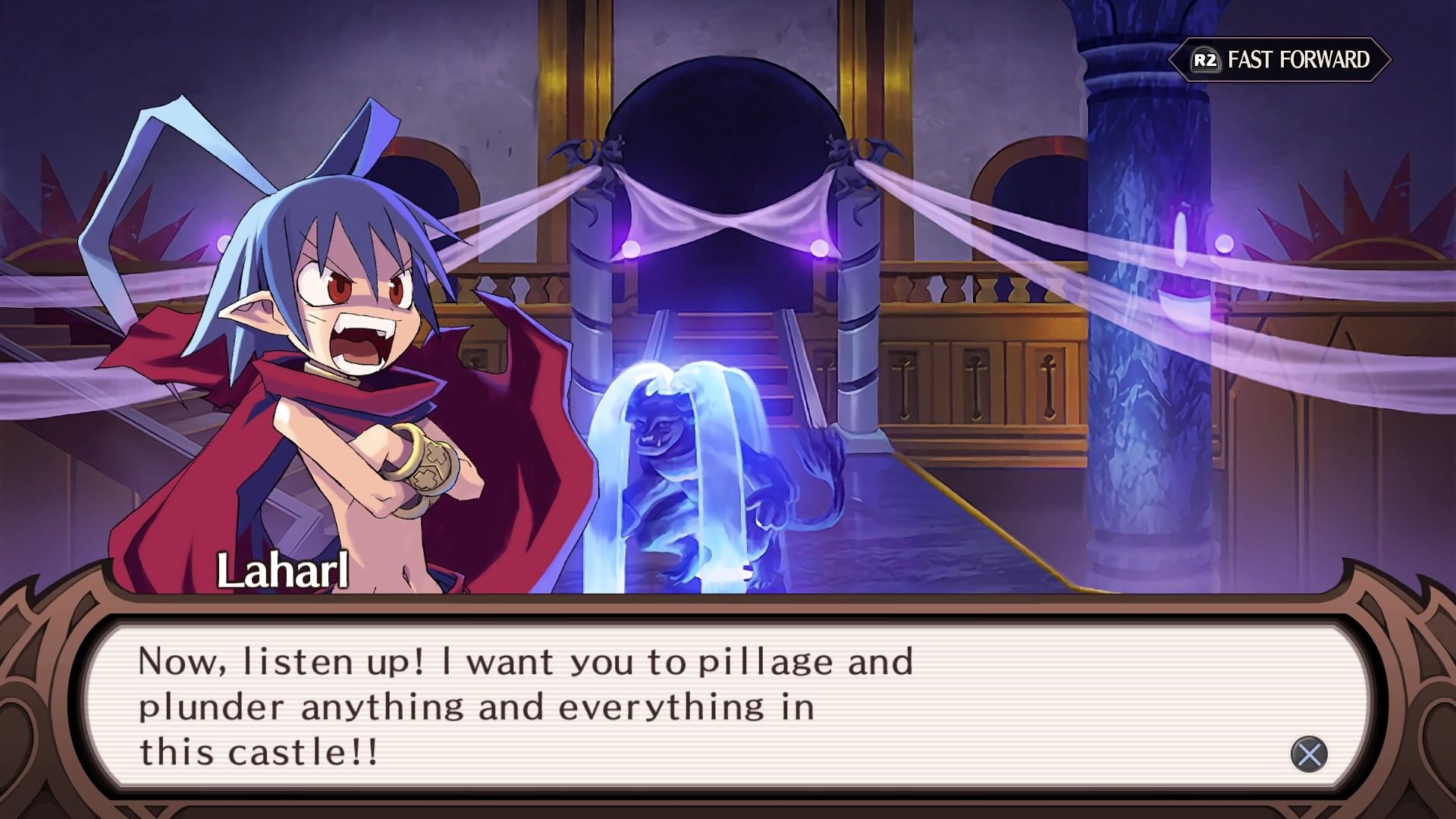 The series made its mark in the strategy RPG genre by going overboard with its leveling system. With the ability for characters and even weapons to reach a level as high as 9999, the characters and worlds are exploding with much power. Keep in mind that enemies can also reach these sorts of high levels, meaning that you can expect to face off against many a difficult foe in Laharl's adventure. This leads me to probably the only flaw in the Disgaea series: its difficulty.

A difficult game is by no means an issue, as it offers many a challenge to gamers of all ages. With that being said, a strategy RPG such as this shouldn't be as tough right at the get-go. When players are expected to start grinding and leveling up during the game's first chapter, that's going to turn off many players right before it starts getting to the meat of its story. Any video game like Disgaea should wait until everything has been taught before cranking the difficulty up, not before all of the steps towards victory have been revealed. (I'd dive more into the errors of half-teaching, but that'd require me reliving my nightmares of learning high school math.) 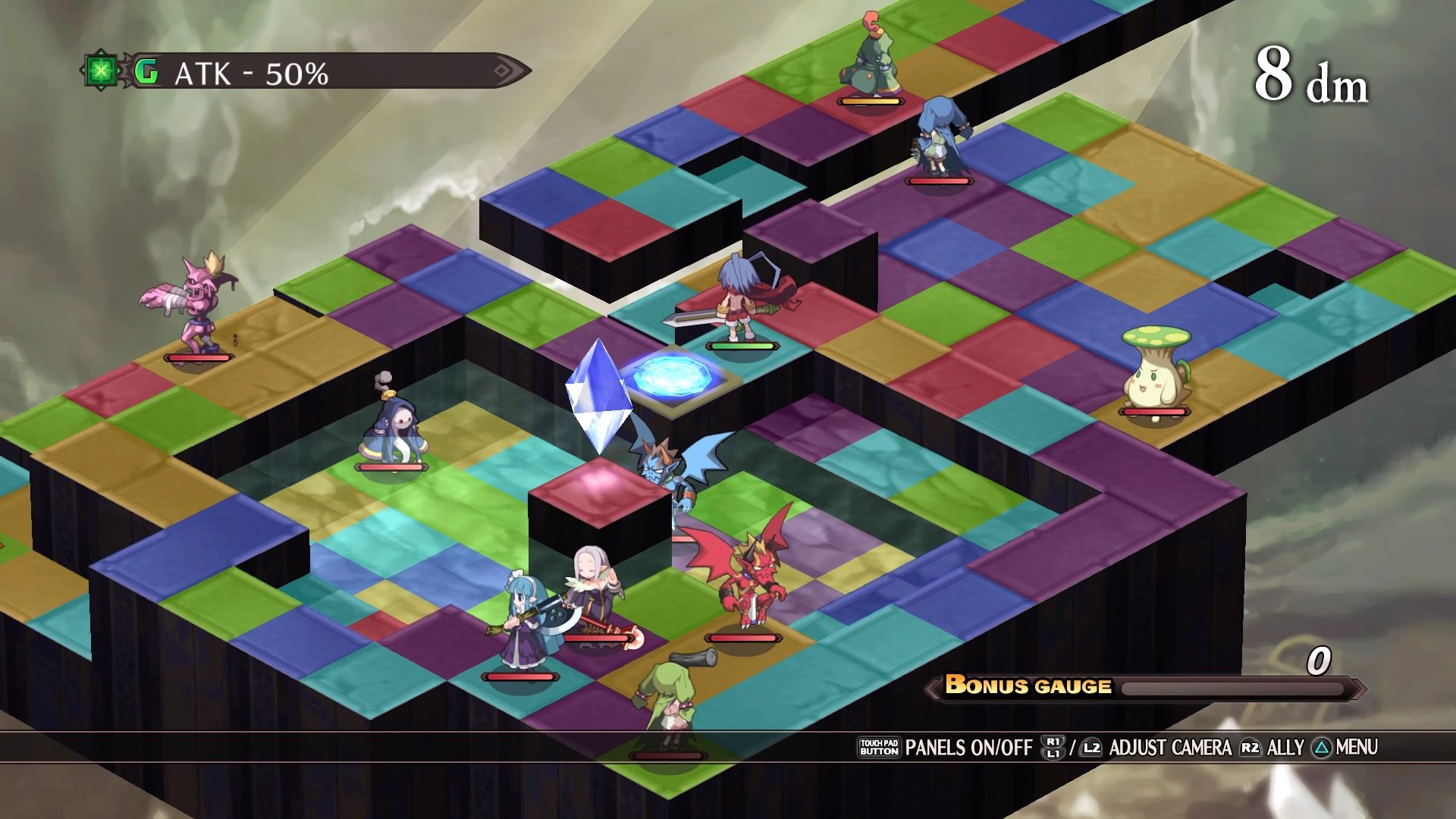 Toughness aside, Disgaea 1 Complete plays beautifully. From its anime-inspired visuals to the fighting mechanics, there's a plethora of cuteness and badassery that's showcased throughout this massive adventure. Although it takes time to master almost every level presented, the trial-and-error process is welcomed by this game, giving players a chance to mess around and discover that perfect strategy. Similar to the likes of chess, the key is to plan ahead and find the best way to eliminate all the enemies in as few swoops as possible.

These moments of strategy will open your eyes to some fun discoveries, from what happens when you throw an enemy at another to some unexpected double-teaming from allies and enemies. Finding that perfect way to defeat the enemies on board does take practice, but once you bear witness to a villain-free board, the feeling you get is just as satisfying as achieving a checkmate on an opponent. It does take a mixture of item-using and weapon leveling to get it right, so -- as mentioned before -- prepare to find yourself grinding through past levels before passing through many of the chapters' more tougher sequences. (It also helps to up your roster, as you bring in more demons and the like into your crew as you defeat newer enemies.) 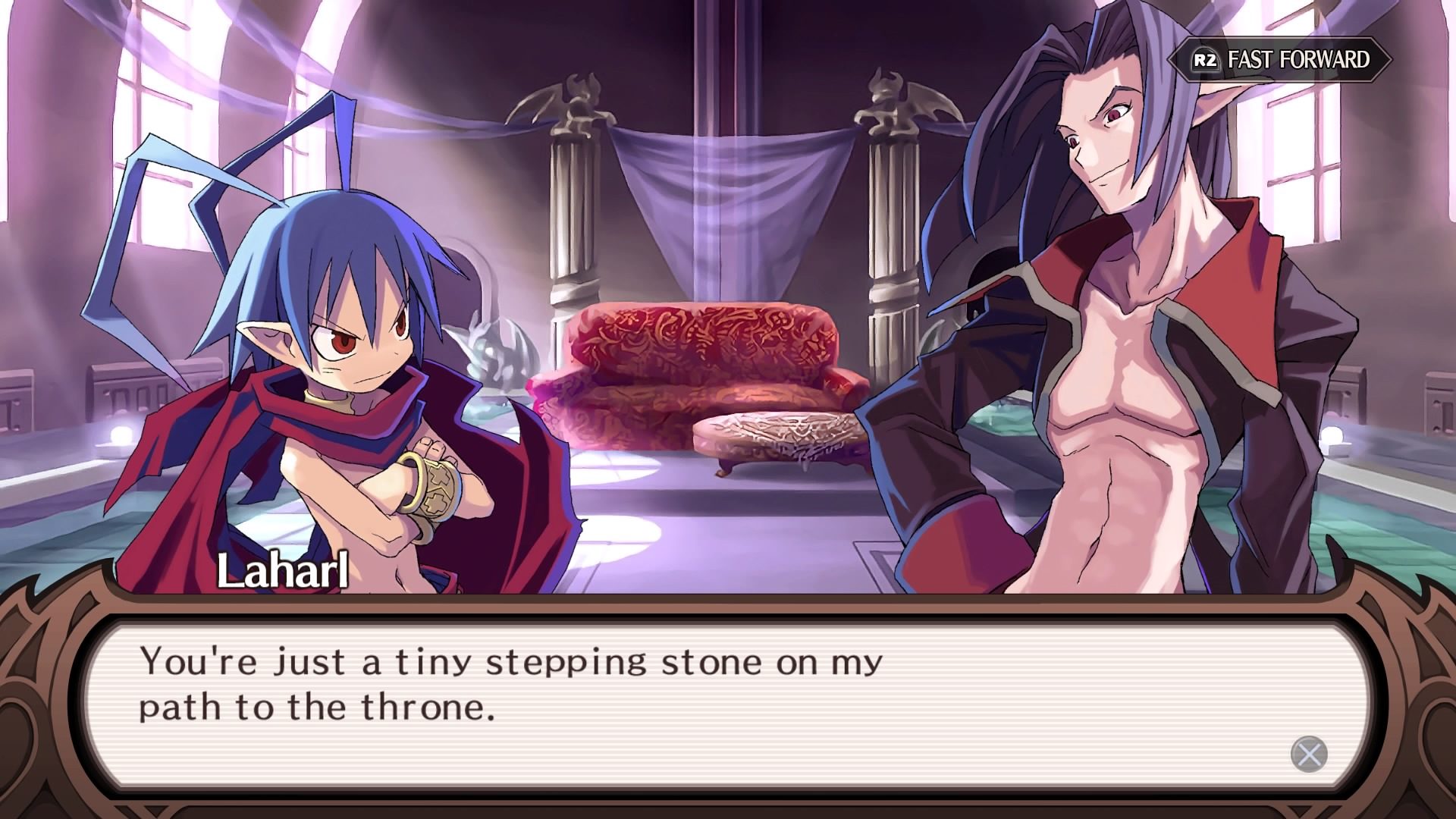 Even more challenging is when you seek to earn upgrades via the Underworld's own version of congress. With the aid of some bribing, you can pass some bills and the like to better your chances at future victories. Because some of the members clearly hate your guts, you can expect to butter them up many times over before their "Nay" becomes a "Yay." (You know, like how the US Congress works.) If the bill doesn't pass, you can always just beat everyone up, albeit that'll be tougher since everyone on-staff is roughly at Level 300, and those are the weaker enemies!

Players who muster through Disgaea 1 Complete's challenging battles will be treated with the story that it tells. The bantering and silliness that occurs between Laharl, Etna, and Flonne make it one of RPG's funniest titles, and the fact that this game originally came out 15 years ago shows how timeless of a tale it is. It's never afraid to get too goofy, nor does it shy away from displaying a heartfelt moment or two here & there. (Props to NIS America for bringing back the original voice cast to rerecord their parts, with Barbara Goodson's Laharl and Michelle Ruff's Etna still sounding as rambunctious and bratty as ever!) 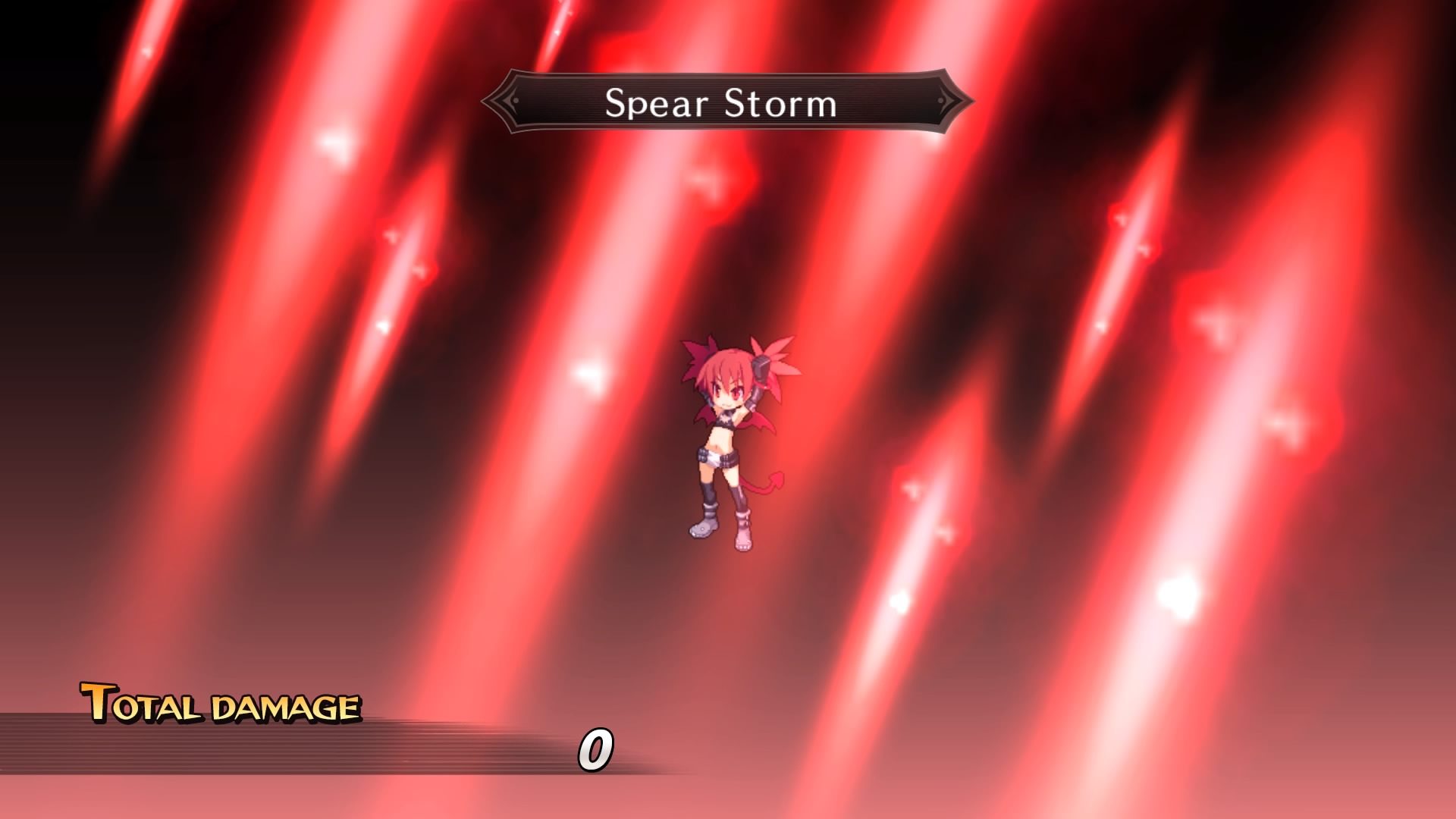 Also on-par is how the game looks. While you can see a few aspects of its PlayStation 2 origins, the remaster does a great job with giving this classic a well-deserved facelift. The chibi-styled characters are still just as cute as ever, and the worlds you battle in looking wonderfully cartoonish either on the big screen or on the Switch's handheld mode. There's also some added detail during battle sequences, with heroes and foes looking far more animated in this remaster than in the original game.

Disgaea 1 Complete will take you roughly 60 hours to beat the first time around. With its multiple endings, you can expect to revisit game sessions to find them all. Players can also experience a side story from Etna's perspective, which was first introduced in the original game's PSP port.

Although it's one tough game to beat, Disgaea 1 Complete still stands as one of the best RPG strategy titles ever made. Funny as hell and filled with plenty of character, the adventure that's presented is worthy enough for any future Overlords to approve without any second thoughts. If you haven't experienced Disgaea in any form before, this remake will certainly be one of the best ways to dive into the craziness that unfolds.

Background Music: Black Parade by Musta Paraati - When vampires and demons need to rock and dance the day away, Finland's legendary goth rock band has them covered with their first album in 34 years. With new frontman Jyrki 69 in tow, the band rips through with fiery blood in their veins via such tracks as "Nacht der Untoten," "Aujourdhui," and the surprisingly toe-tapping "Radio." Blare this one loud to appease the inner demon that resides deep in your belly, and feel your fangs sharpen as it thirsts for the blood this album runs wild with!