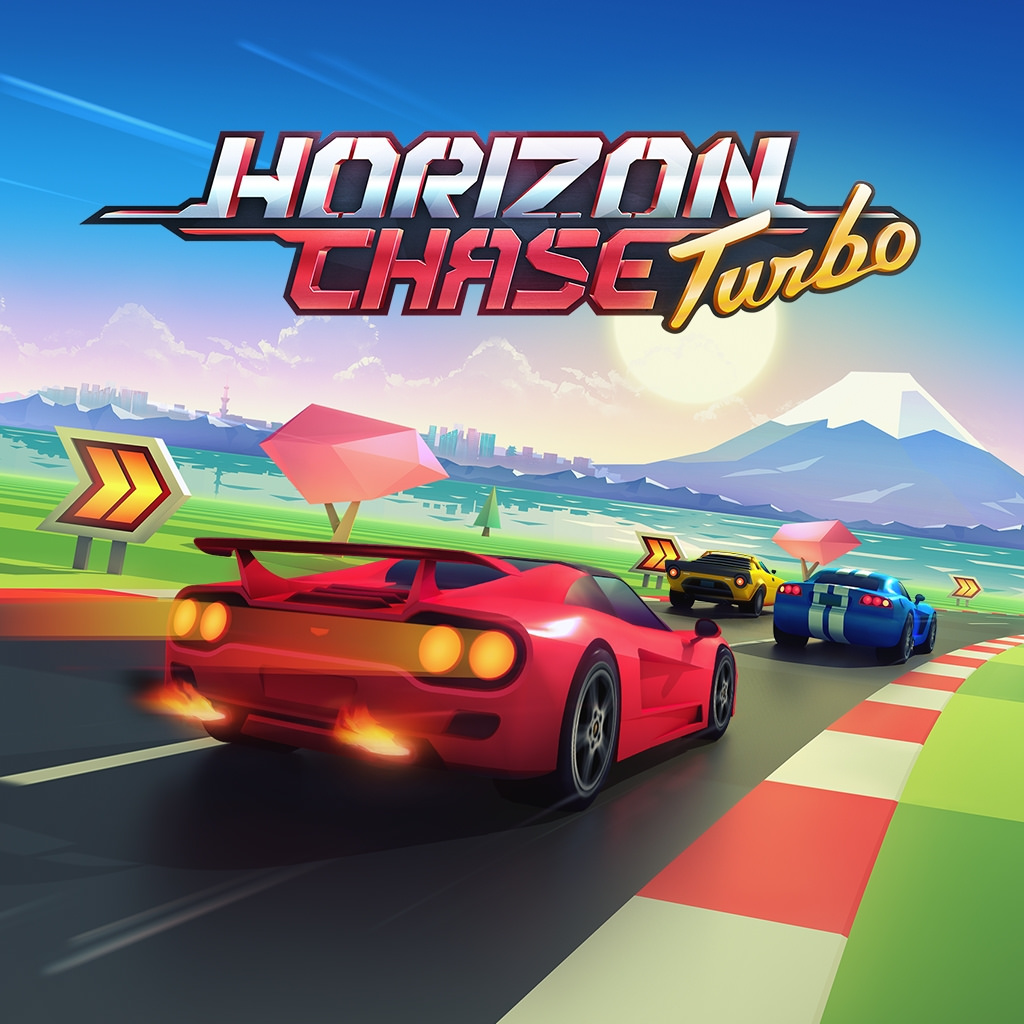 As a kid, I loved arcade racing games. Granted, I was never the best at them, but the thrill of sitting in a car or on a bike-shaped peripheral made me yearn for a taste of speed. The likes of Out Run, Rush, and SEGA Super GT were where I placed many a token to put the pedal to the metal, and it felt good just finishing rather than losing my momentum halfway through. Game developers Aquiris seemed to miss this sensation too, which is why they've done all that they can to emulate that feeling with their own take on those arcade classics (sans giant plastic peripherals, of course). With Horizon Chase Turbo, they've succeeded in ways that even a reboot of those classics may not have been able to deliver!

Horizon Chase Turbo has you taking on the world against some of the toughest racers on many a challenging course. From America and Brazil to Africa and Japan, players will be globetrotting throughout to make a name for themselves in a game of speed and acceleration. The more you win, the more places, cars and upgrades you can unlock to better yourself on the road. Of course, taking on these challenges won't be a walk in the park; they'll be a high-octane journey that might melt your face along the way! 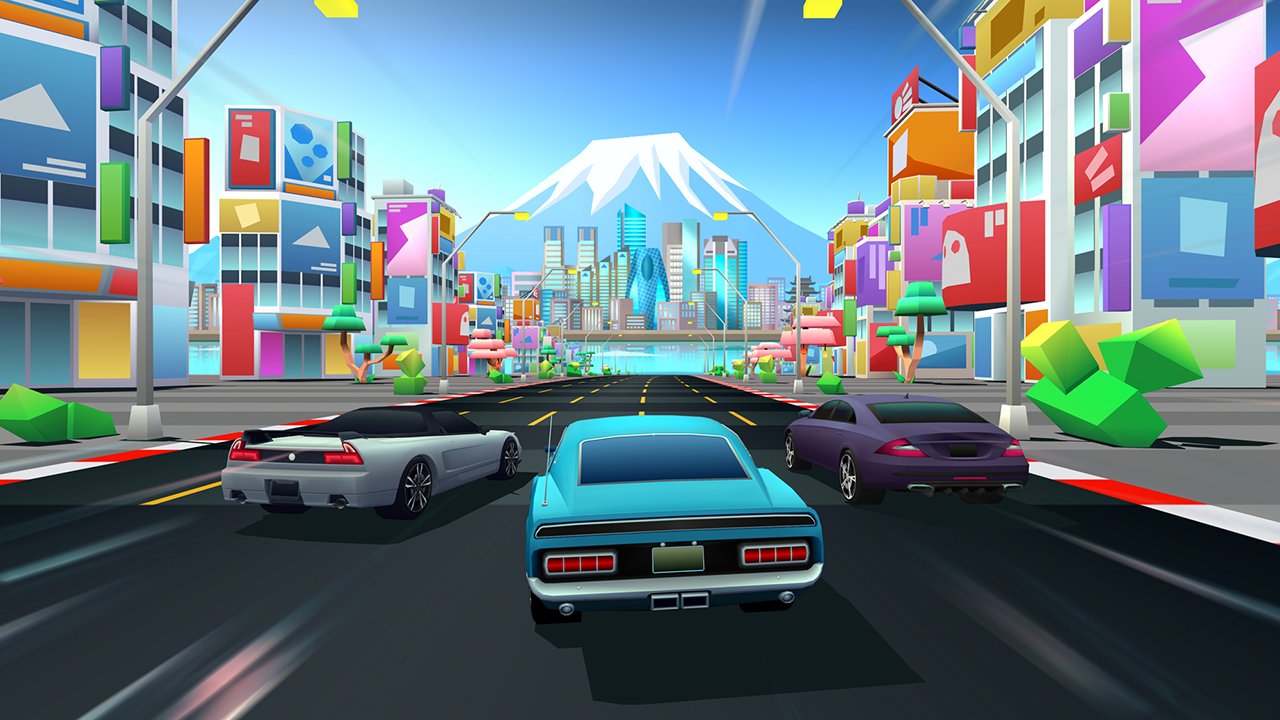 With twelve cups spread out across 48 cities and 109 tracks, the plethora of content that Horizon Chase Turbo gives right out of the gate is stellar. As such, each place you travel may have its own unique challenge or hinderance that will make it more difficult to take the top billing. Be it something as simple as a night drive or more catastrophic as a sandstorm, each track delivers something that will make your overall experience more memorable, especially if you gain a victory. There's also one other speed bump that's keeping you from gaining the biggest trophy imaginable: the other drivers.

Unlike most racers, the opponents in this game aren't chumps in the slightest. Often they take the initiative to bump myself (and each other) off the road in order to gain the advantage. Even on the most thinnest of roads, they will make it their mission to not let you pass, as they'll be as big of a hinderance as a racer could. Thankfully, you can return this favor by giving them the ole sideswipe into an oncoming sign or telephone pole to raise your own placement. 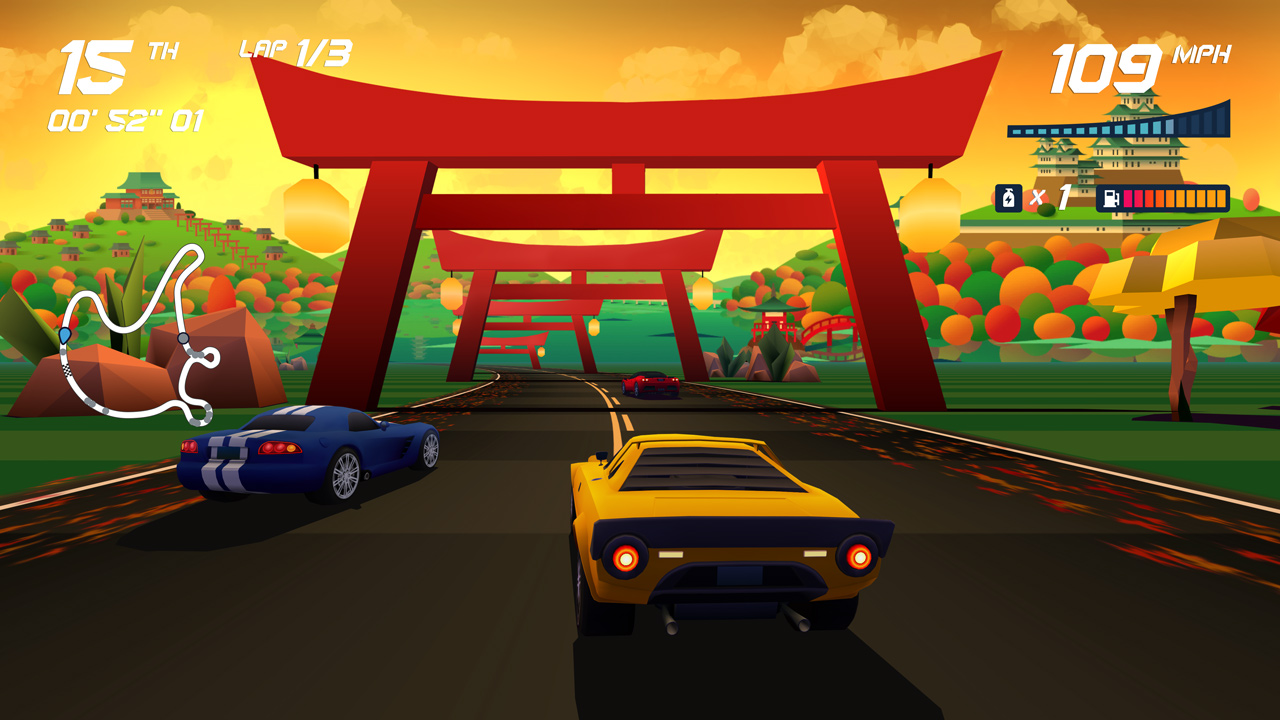 This adds to Horizon Chase Turbo's greatest strength: its cold nature towards the player. Never once does it wish to hold your hand or give you an easy win. Instead, it just drops you into the race, and you're expected to keep a close eye on your surroundings. Sharp turns, road hazards, and even your own fuel supply will need to have a close eye on to make sure they don't screw up royally. And believe me: you will find yourself pressing Pause and choosing the Restart option on many occasions.

As such, the game welcomes its players to find a strategy to be the #1 racer! Whether you attempt to memorize the track or covet your Boosts until the last minute, how you plan to earn the victory will depend on how much your brain works together with your fingertips. Even still, the addition of the smart AI in the opponents gives way to strategies collapsing right before your very eyes. Like the best races, Horizon Chase Turbo aims to be unpredictable at every turn. 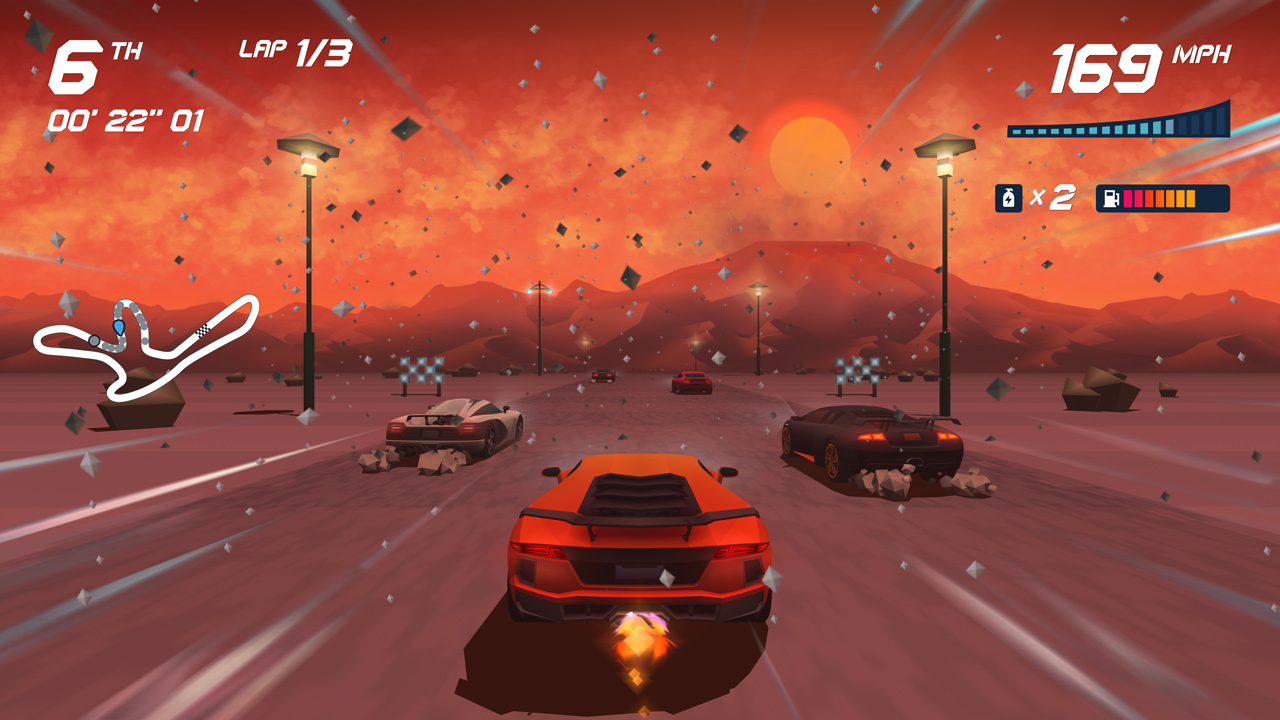 While progressing, players will be able to unlock new modes that will test further skills. You start out with the World Tour campaign, and as you progress, you can gain access to Tournament, which pits you in four races to aim for the top at. Later, you can enter Playground, which will give you five rotating challenges that you can compare results with your friends and the rest of the world. Lastly, there's Endurance mode, which will have you racing in a non-upgradable vehicle in a selection of racers that will require you to rank above a specific point to continue.

Visually, Horizon Chase Turbo calls back to the Super Nintendo era of racing games, but with a thicker coat of paint. Racing through at 60 frames a second on the Switch, the colors that flash as you pass through each track are truly stellar. I also got a kick out of each place's own unique touch, with an Easter Island-like track standing out as one of the most visually stimulating courses to choose from. Adding to the retro-based aspect of the game is the soundtrack by Barry Leitch, who uses his massive racing game portfolio to deliver melodies that call back to the classic scores of gaming past. 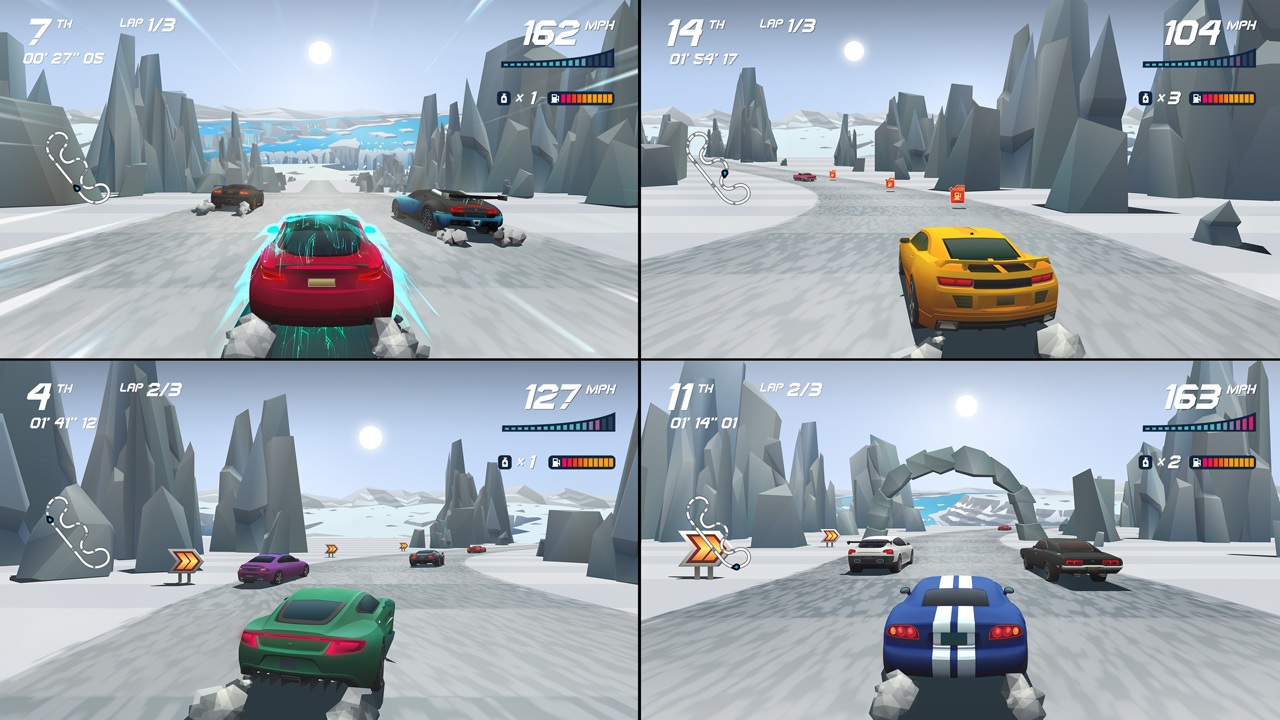 Despite the multiple levels of fun to be had, there's one little hiccup that the game is lacking: online mode. While there's a well-done split-screen mode to try your luck with friends, it's rather disappointing in this era of gaming that a racing title doesn't give you the option to play against friends live right then and there. (There are ways to race against friends' ghosts in a couple of modes, but it's not the same as taking them on at the exact moment.)

Horizon Chase Turbo truly captures the spirit of classic arcade racers in the most wonderful of ways. From its challenging tracks to the blend of old-school and HD visuals, Aquiris delivers one hell of a fiery wheel-tuner around every sharp corner. Those who miss the simple fun and excitement of the likes of Crusin' USA will no doubt find solstice in what Horizon Chase Turbo has to offer.