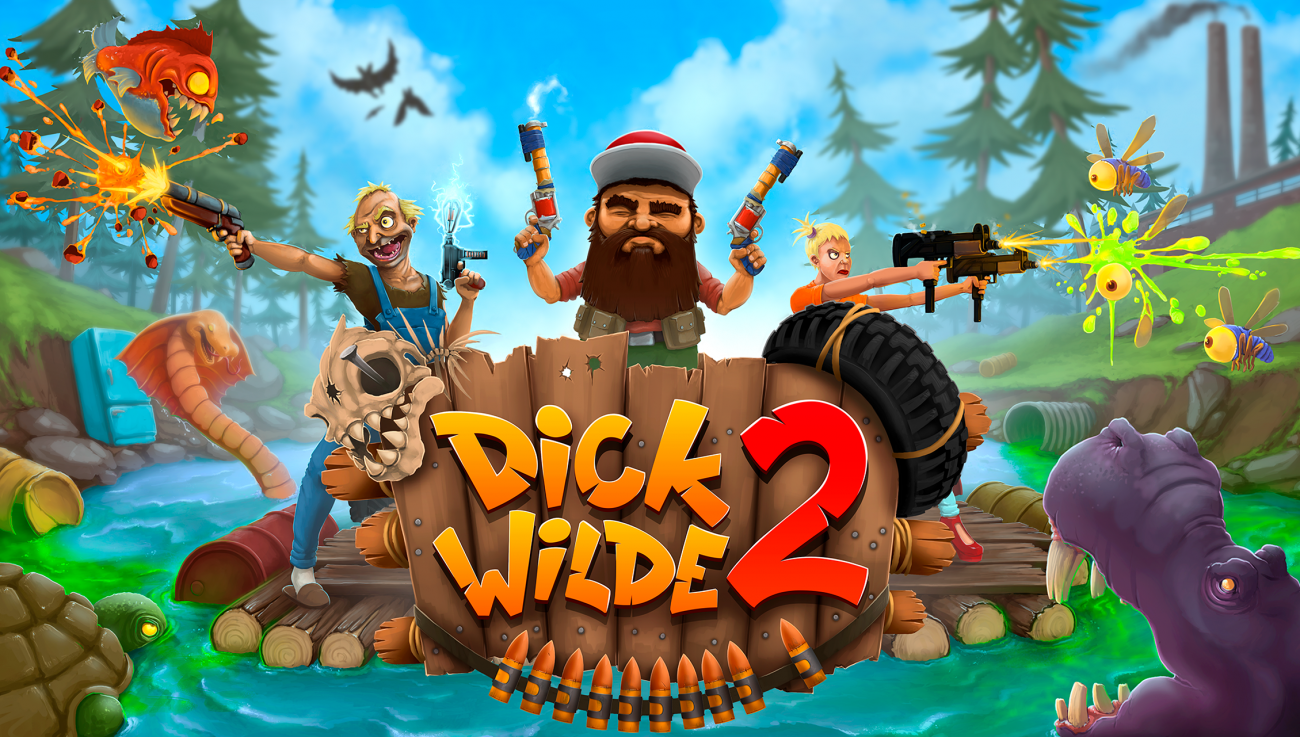 Sometimes you just want to go out and do some hunting. However, the fact that it costs quite a lot for ammunition and gear -- on top of the fact that some animals are just too cute to shoot -- can often take the wind out of one's sails. Fortunately, that's where the wonders of virtual reality can come into play, with Bolvërk Games returning to the world of mutated critters and southern drawl with its sequel Dick Wilde 2. The end result is a classically-felt rail shooter, though one should be thankful they don't have to worry about dropping in quarter after quarter to play it.

Dick Wilde 2 returns you to the swamplands, as the big-bearded exterminator takes on a boatload of angry critters. Because of toxic waste, the animals you face have become nastier, as they leap, shoot fireballs, zap, and even ride on torpedoes to keep you from harming them. Thankfully, players don't have to go at this alone, as they can call up a friend online via the PS4 or PC to help take these ugly foes down. And considering how hard things get early on, phoning a friend may be one's best option to gaining a victory. 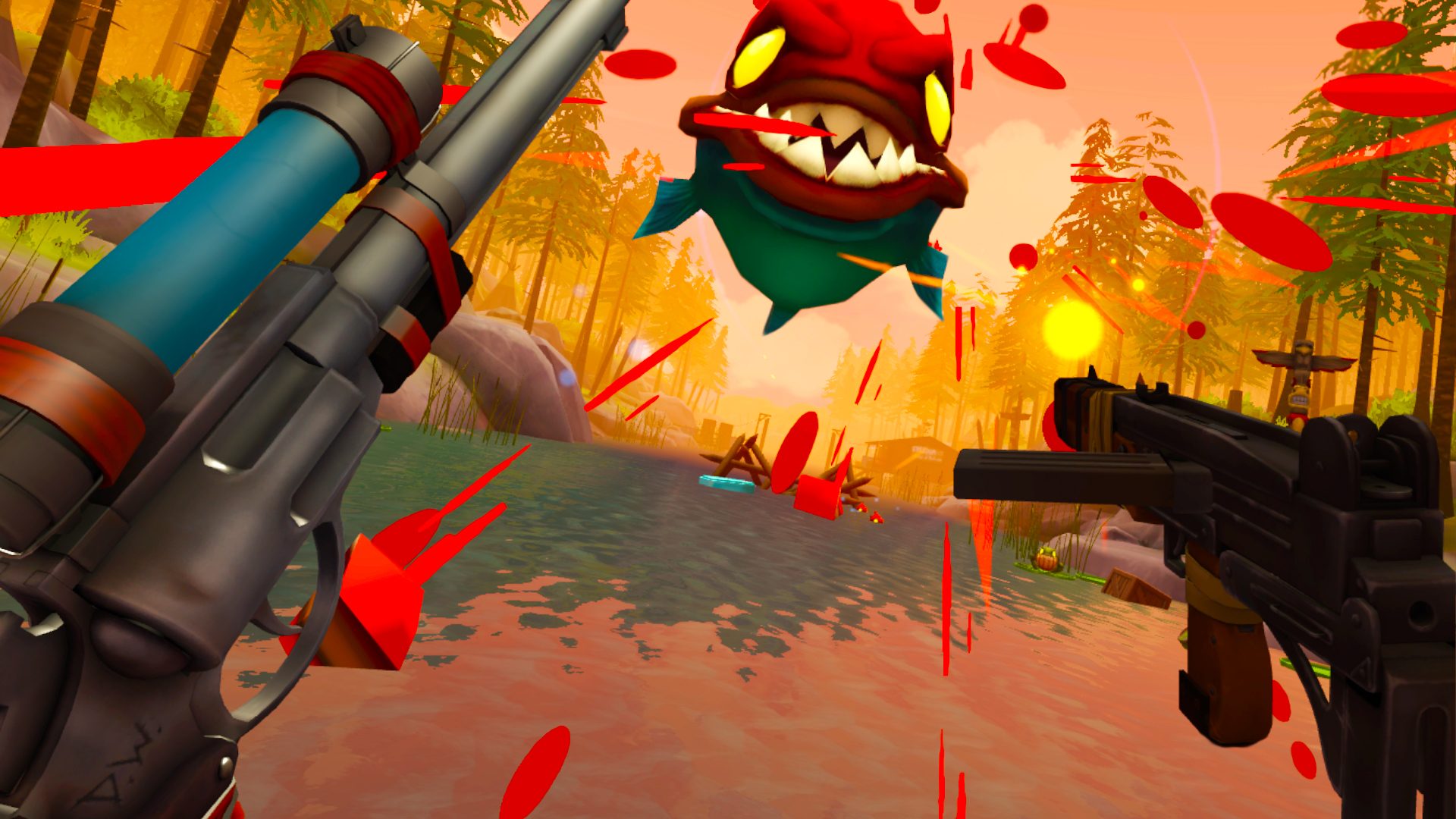 Despite its simple looks, Bolvërk Games' sequel is packing with hardcore levels of difficulty. From nasty piranhas launching at you to cobras spitting balls of fire your way, there is not even half a second to catch a breather while you play. Perhaps it's a good thing that you have an infinite amount of ammo without the need to reload, as you'll often find yourself firing your pistol away to help stay alive. The only time you get a chance to give those trigger fingers of yours a rest is at each level's checkpoint.

These checkpoints are a very necessary lifeline, as it gives players the chance to buy more powerful weapons, as well as fill their health meters & purchase certain power-ups. Regarding new guns, one must be careful as to how and when to use them. I often found that despite their so-called upgrade, that it takes just as much time to take down an enemy as it does with a normal pistol. Though shotguns and Uzis can be handy when taking down barriers or barrels, it's those butt-ugly mutant beasts that seem to withstand even the toughest of firepower. 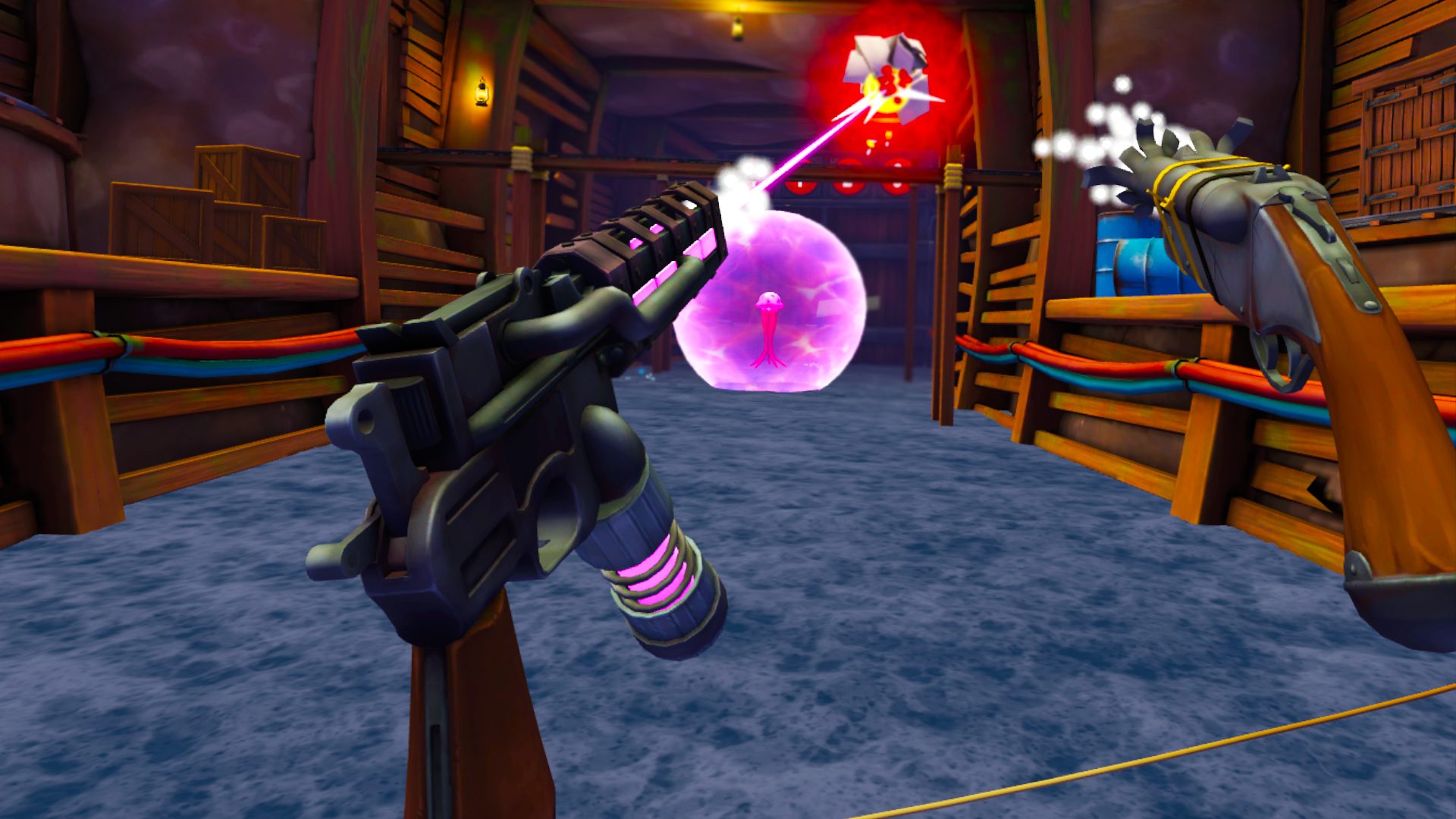 As such, there is a bit of strategy involved when playing Dick Wilde 2. One needs to look for explosive barrels and other hazards, timing their shot right to get multiple enemies at once. This does come in handy when dealing with the fireball-shooting frogs and torpedo-riding moles that act more as a nuisance than a challenge. Many of these creatures are -- to be blunt -- tough as nails to deal with, so one needs to have proper precision and a steady hand to get that kill.

It's the control scheme that makes playing Dick Wilde 2 a good, lasting experience. Playing with the PlayStation Move, the aiming system is incredibly on-point. I'll even go so far as to say it's far better than what I experienced with The American Dream VR, which had its more nightmarish parts that made aiming ridiculously tough. Here, it's just a simple aim, shoot, and watching mutant fish transform into future tuna noodle casserole ingredients. As fluid as most arcade shooters, the game does a great job with being fair with one's aim instead of throwing a monkey wrench into one's gameplay. 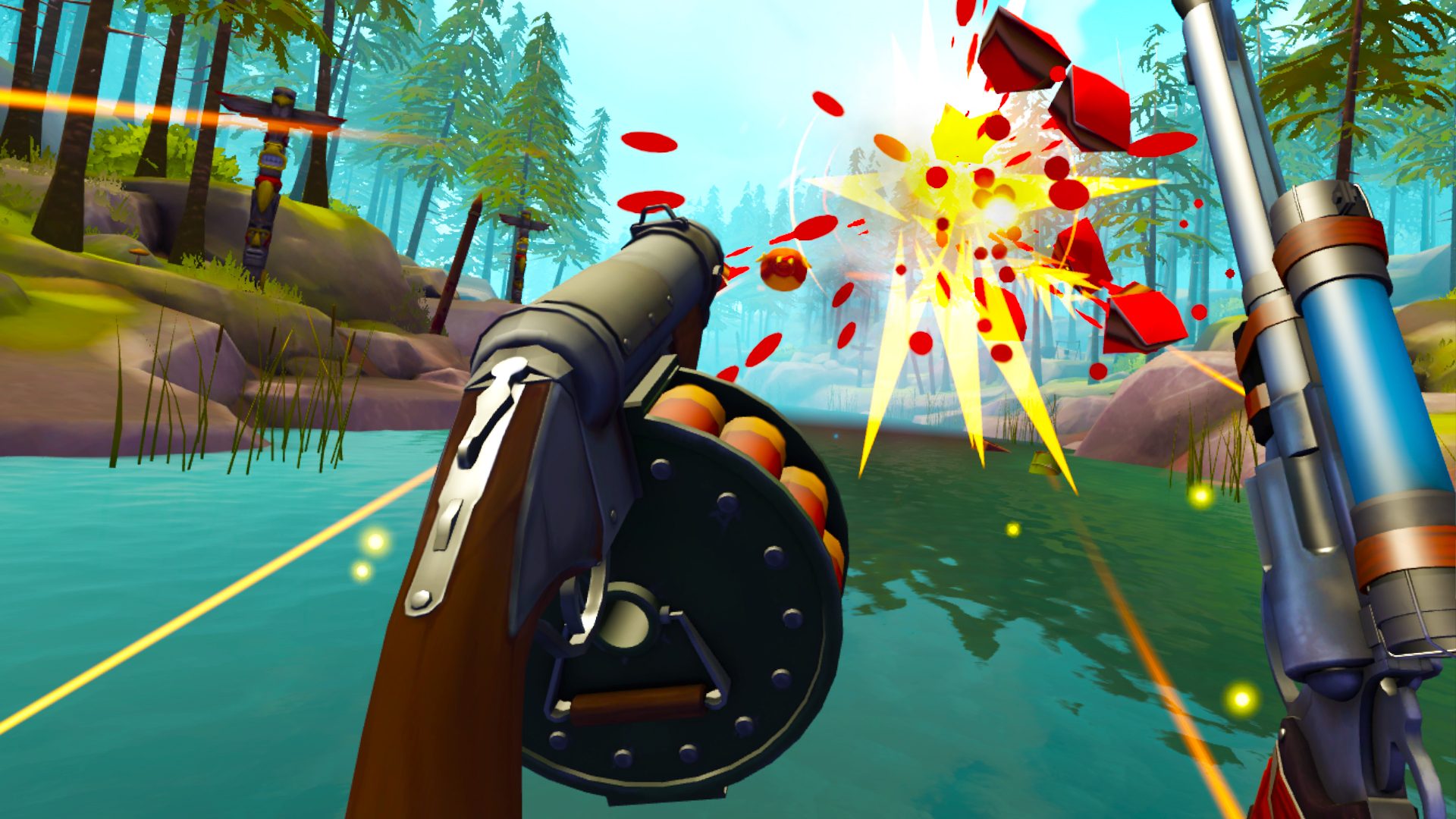 Visually, the game is not in the least bit realistic, and that's the point. Bolvërk Games instead focuses on more cartoonish worlds and sillier creatures for players to deal with. What it is able to do properly is give VR users a great dose of immersion in their gameplay. One cannot help but appreciate how much it feels like you're just taking in a nice raft ride through some swamplands. (That is, until the niceness is interrupted by the mutant buggers.)

As for flaws, Dick Wilde 2 does have a couple. I couldn't help but feel like its soundtrack felt a bit too same-y throughout my gameplay time. Even though I appreciate some good folk and banjo music, it just got a little bit repetitive for its own good. The same can be said about its script, all filled with some pretty groan-inducing jokes based on the south and video games. (Methinks Bolvërk Games should watch a few episodes of The Red Green Show to seek out a much stronger script in the near-future.) 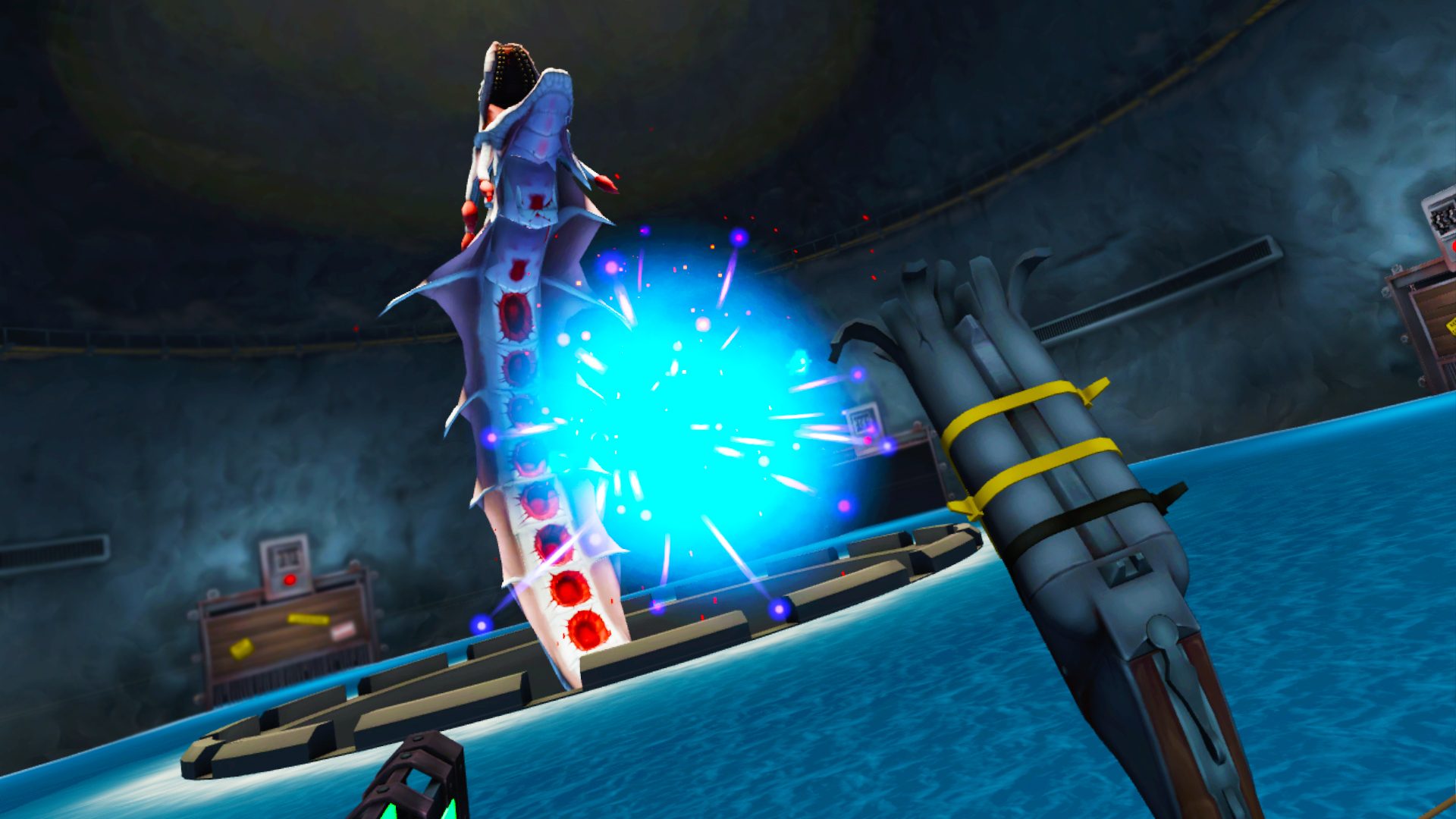 Lastly, the game does get hard very quickly. Even by its first level, you'll find yourself going gun crazy while attempting to shoot everything around you. Because of this, players will more than likely make tons of mistakes and being forced to start all over again. This may cause some frustration on players' behalf, especially when in single-player mode.

Dick Wilde 2 will take you roughly five hours to complete. As one needs to collect a plethora of keys to unlock more levels, players will be expected to replay certain areas in order to gain access to everything. It's this reason that makes taking on this toxic-infused swampland with a friend a lot more fun than attempting to conquer it solo.

Be it solo or with a friend, Dick Wilde 2 offers loads of challenges and fun for those just wanting to get some shooting done. Thanks to a strong aiming system and a plethora of weapons to give a go, this swampland adventure is itching to be experienced by all lovers of rail shooters. Next time, though, its funny bone could use a little fixer-up with some duct tape.