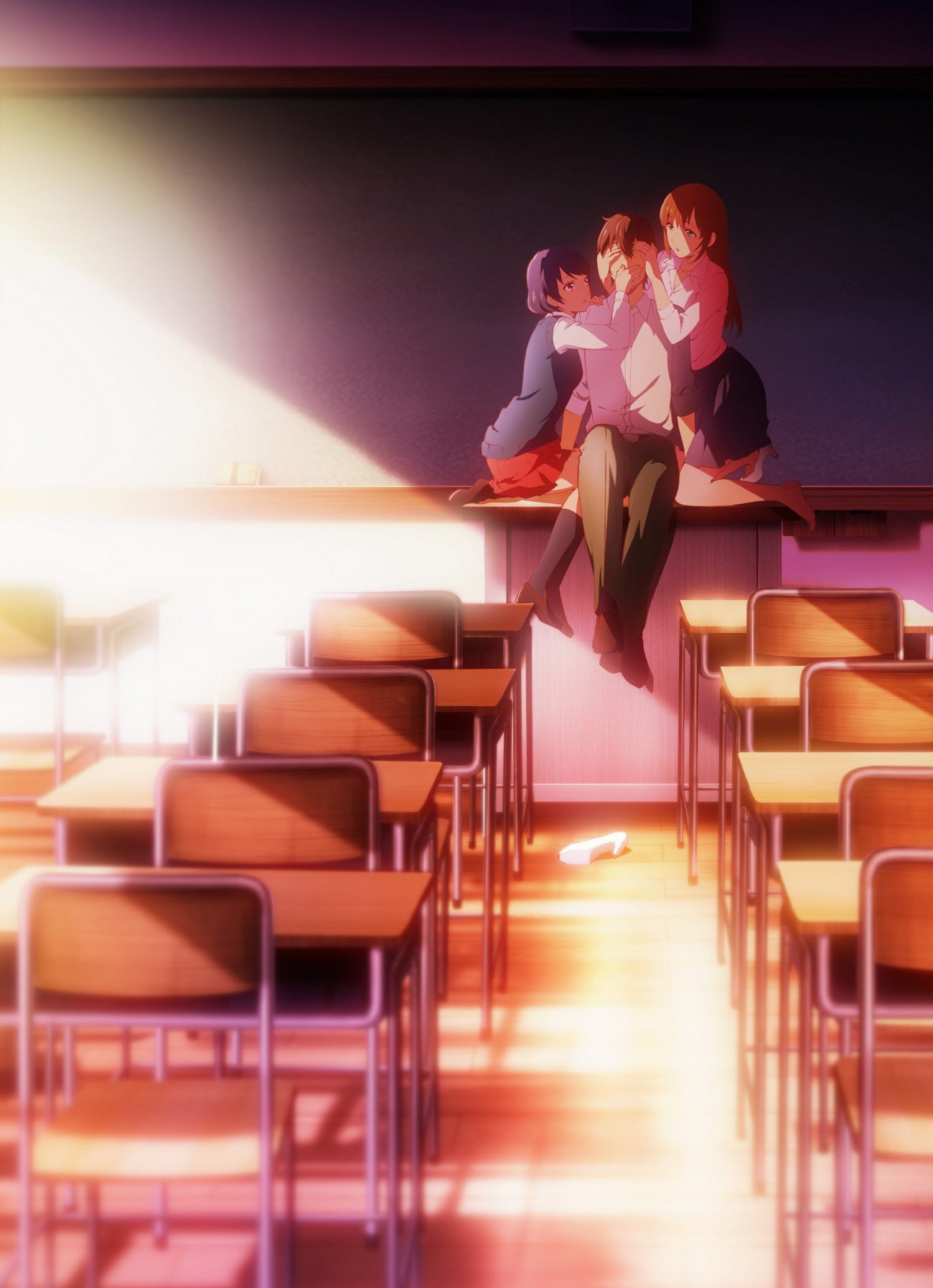 They say one man's trash is another man's treasure. When it comes to anime, a person can see a show as both a piece of trash and something that's worthy of beholding. This leads me to this season's Domestic Girlfriend, which contains a premise that's wrong on so many levels. And yet, every week I cannot help but find myself glued to my TV watching the next episode.

Based on the manga by Kei Sasuga, Domestic Girlfriend follows wannabe writer Natsuo Fujii (Taku Yashiro), who often fawns over his teacher Hina Tachibana (Yoko Hikasa). During a mixer, he meets an odd girl named Rui (Maaya Uchida), who convinces Natsuo to have casual sex. The next day, Natsuo's father announces that he plans to remarry, with his new soon-to-be-wife planning to come over that evening with her two daughters. When they arrive, Natsuo is shocked to find that his new stepsisters are -- brace yourself -- his teacher Ms. Tachibana and his one-night-stand Rui. 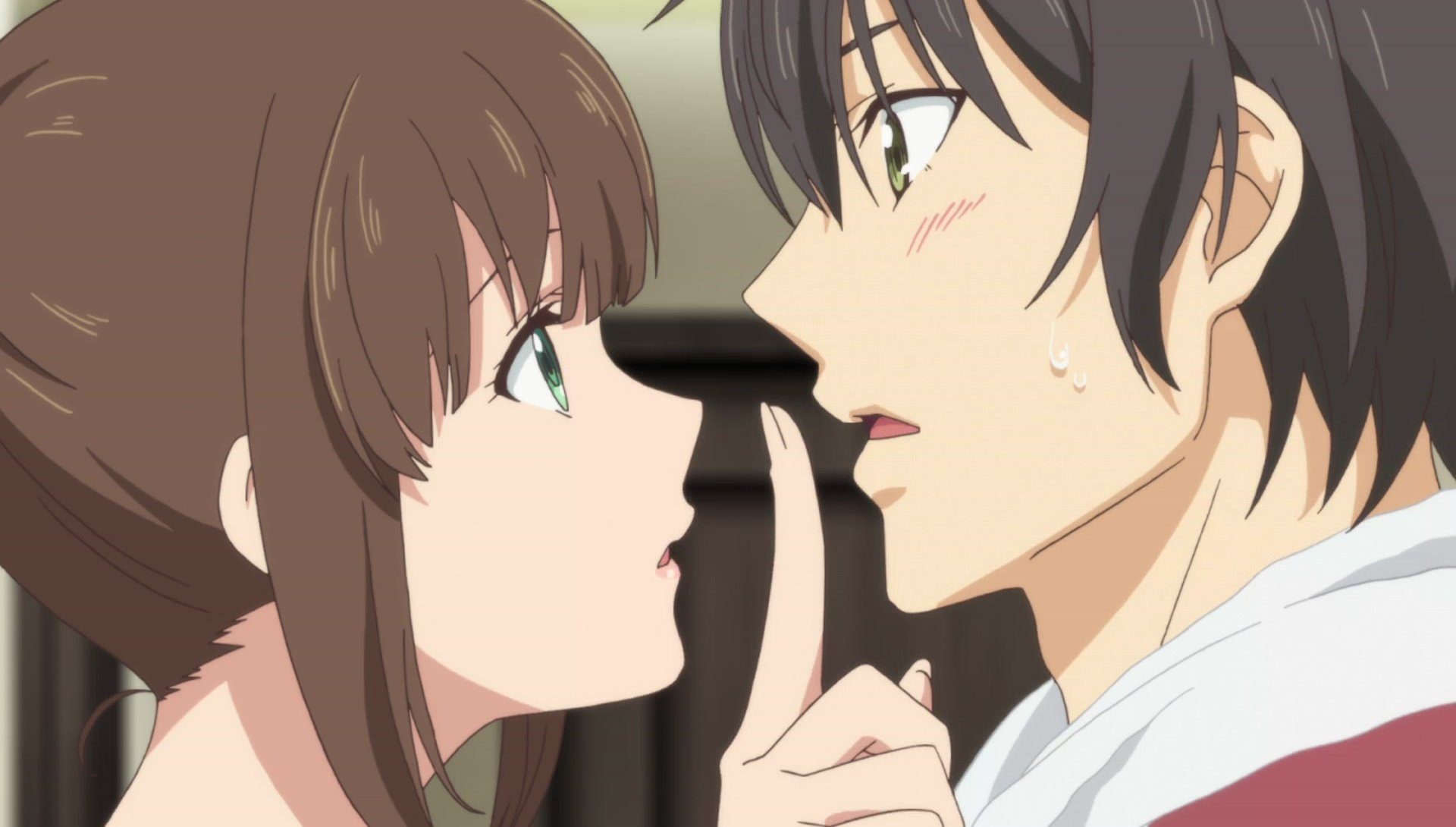 By now, you're probably screaming, "Are you f**king kidding me?!" from the top of your lungs. Hell, I don't blame you in the slightest. There are not enough red flags to throw around at such a concept. And I would understand completely if you just stopped reading this review right here and now, as there are probably a good chunk of you that can't stand this kind of premise. But for those of you who are sticking around for the rest of this review, strap yourselves in.

You see, Domestic Girlfriend doesn't write off Natsuo's feelings for Hina, nor does it squash any sort of connection that he and Rui had during their night of bed-rocking. Nay, despite his new circumstances and awkward position in life, he somehow manages to make his feelings for both of his new step-sisters grow to even more eyebrow-raising lengths. Secret make-out sessions, cringe-y bathing scenes, and even serious conversations revolving around this taboo are brought out in full force. There is even the stereotypical runaway storyline here and there, with Hina going so far as to move out of the apartment into her new place so as to not make anything else weirder than it already is. (Spoiler alert: that tactic doesn't work in the slightest!) 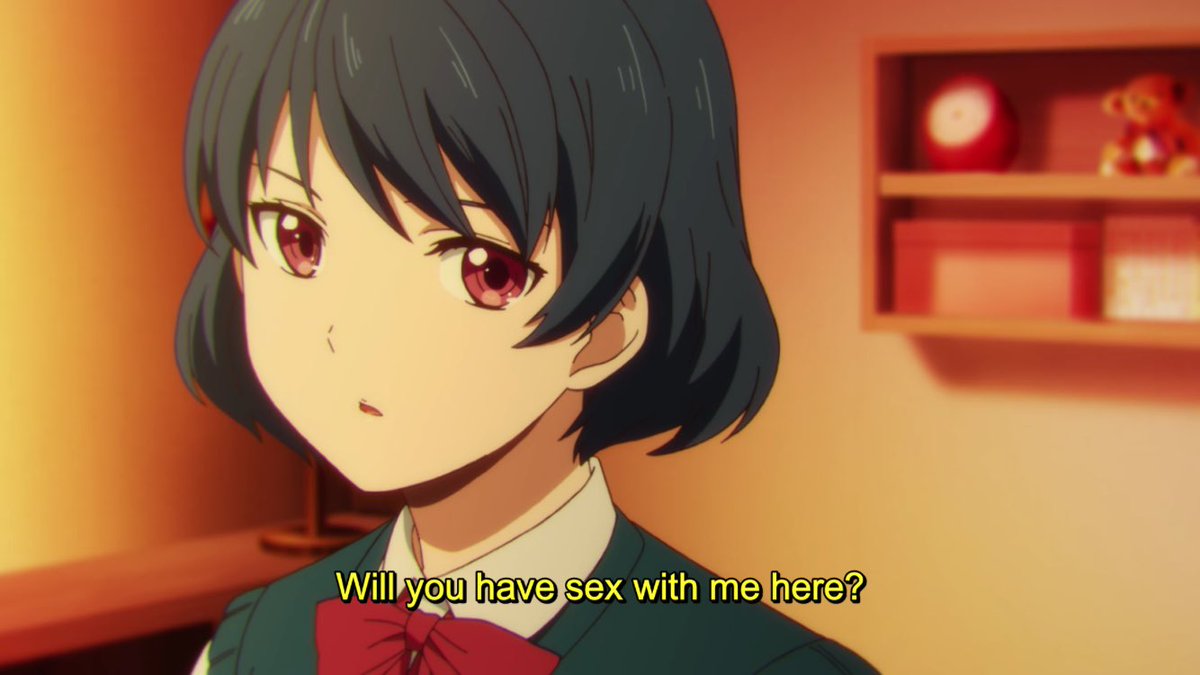 This is the kind of writing where it is so bad that it's a legit guilty pleasure. Even worse is the fact that the series knows how to legit entertain its viewers with such soap opera-styled storylines and dialogue. Domestic Girlfriend knows how to make your jaw drop, but rolling one's eyes is something that it surprisingly doesn't try to push onto its audience. Granted, you may find yourself groaning into a nearby pillow or falling onto your couch in disbelief, but at the very least it knows exactly what it is and what it wishes to accomplish.

One of the big reasons that keeps this anime entertaining is a couple of the side characters: Natsuo's best friend Fumiya (Takuya Eguchi) and his flirtatious bartending boss Masaki (Kenjiro Tsuda). The pairing of these two act as social commentary for just about everything that happens in Domestic Girlfriend. They are a representation of the audience itself, a water cooler chat personified to the point where it feels like they're the only voices of reason in this entire show. Where the strange love triangle between Natsuo, Hina, and Rui goes off the rails, these two puts common sense back on track, as if they're secretly laughing at this premise existing right in front of them. 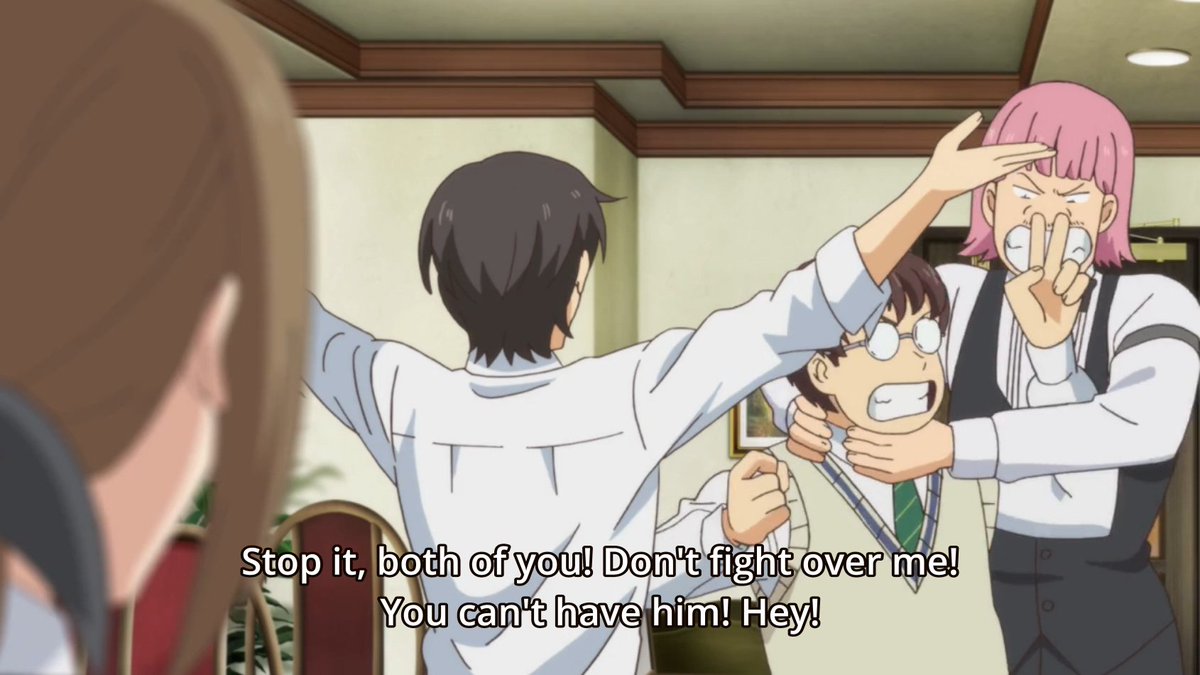 And yet, it's hard to see the step-siblings as bad people. Granted, what they are doing is wrong in every sense of the word, but it's not like they expected to become relatives during their escapades. Trying to turn off these kinds of feelings and emotions is difficult, and Domestic Girlfriend has shown that pushing down these thoughts can lead to them just upchucking and exploding instead. As such, these three are placed into one promiscuous situation after another, to the point where its audience is just waiting for their parents to catch them in the act.

Thankfully, this anime doesn't go the KissxSis route and attempt to reach disgusting levels of showcasing its characters in the heat of the moment. Yes, there is one scene of Hina performing self-pleasure after reading Natsuo's book-in-progress, but other than that, Domestic Girlfriend would rather just show characters making out instead of going the more risqué route. Even the scene of Natsuo and Rui losing their virginity is rather tame, as it merely presents the before and after moments of the deed in question. With that being said, its content and premise alone is just enough to warrant a TV-MA rating, as it does touch on a lot of uncomfortable scenarios and the like. 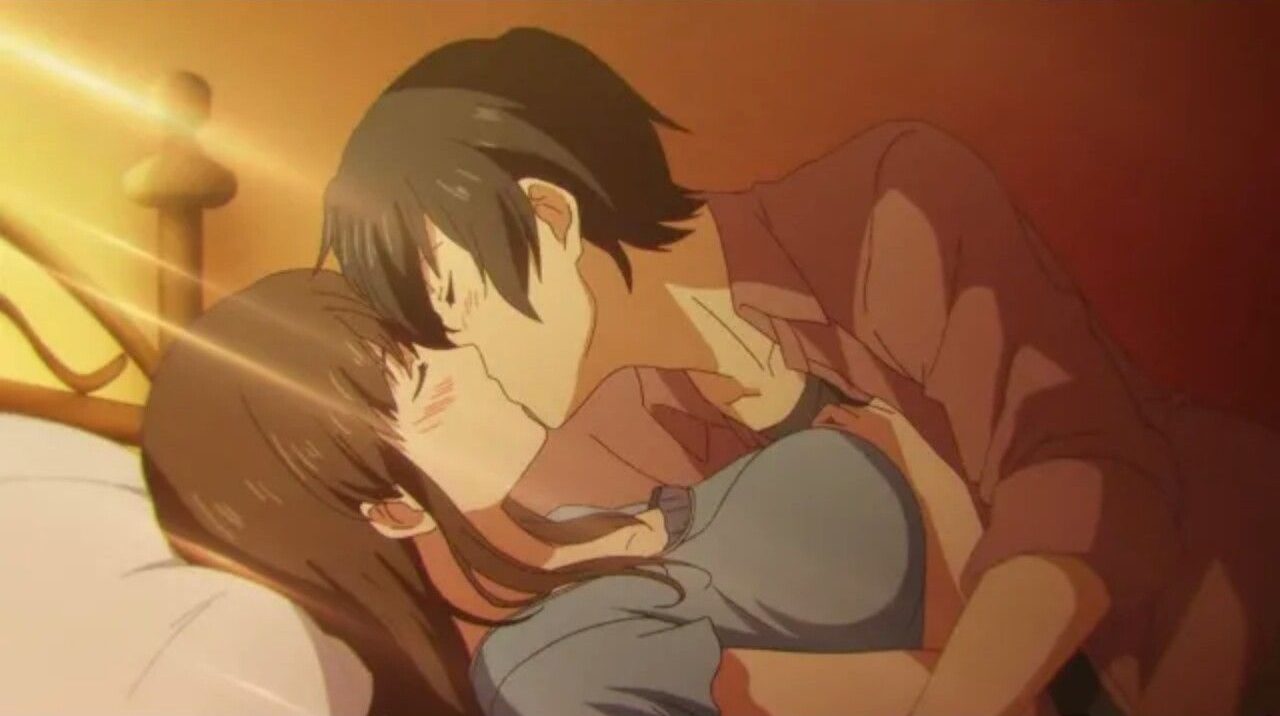 A big reason for this anime's (somewhat) success is its voice cast. Yashiro gets a good dose of confusion and teenage angst in his role of Natsuo, placing his performance in the range of being believable without also being relatable. Hikasa's Hina demonstrates a good heart, but knows when to throw in some vulnerability into her portrayal. Uchida is enjoyable as Rui, with her introverted mentality conflicting with her somewhat uncaring attitude. Of course, it's Eguchi and Tsuda who steal the spotlight as Fumiya and Masaki, breathing in both hilarity and common sense into their bantering and observational commentary.

Diomedéa (Squid Girl, Chio's School Road) does a rather decent job with Domestic Girlfriend's visual aesthetics. Its attention to the setting and backgrounds are wonderfully detailed, with even the tiniest of tidbits in one's bedroom or a cafe given enough love and care. As for the characters themselves, they can be okay for the most part. There were a few times where someone's model looked a bit off-putting, be it due to the angle of the shot or even just the animation itself just looking a tiny bit shoddy. However, compared to their most recent works, Diomedéa somewhat steps it up here and shows that they're improving more and more.

It's very surprising to hear Masato Kōda (KonoSuba, Asobi Asobase) composing this anime's score. Although the music is decent, it's not quite up to par with many of his other contributions to the anime realm. It is hard to deny how good of an opening theme "Kawaki wo Ameku" is, with performer Minami singing about the rough patches in a troubled romance with Tori Amos levels of power and frustration. Alisa Takigawa's end theme "Wagamama" is also pretty good, being a little bit more calmer than the opening but just as catchy.

Domestic Girlfriend isn't a great anime, but its writing and treatment of its characters keep it from being a bad one. This is the kind of show that you would put on after your K-DRAMA queue goes dry, as you both cringe and laugh at its crazy story elements and somewhat steamy romance. You may feel just a tad dirty after a viewing of Domestic Girlfriend, but a handy invention known as the shower will aid in fixing that problem. Don't go into this series expecting something deep and surprising; just prepare for some fulfilling anime trash.

Domestic Girlfriend can be viewed on HIDIVE, VRV, and Crunchyroll. Episodes 1-10 were observed for this review. Promotional consideration provided by HIDIVE.