The Earth Defense Force series has brought wave upon wave of creepy crawlies for players to destroy time and time again. They're also not ashamed to showcase how silly the story can be, with its tongue placed firmly in-cheek throughout the franchise. But what happens when the funny bone is taken out of such a franchise? The newest addition to the Earth Defense Force franchise -- Iron Rain -- demonstrates such a concept, with pro wrestling experts Yuke's taking the helm for this new adventure.

Earth Defense Force: Iron Rain may seem like a spinoff, but it feels like more than that. Rather, the story of the EDF killing giant bugs and alien bots takes a new bold route in the long-running franchise. With a feeling similar to the cult classic Starship Troopers, Iron Rain takes a more serious tone with the goings-on with the creatures sent to destroy humanity. And if one thinks that a game about destroying giant insects can't have some drama thrown into its gears, well...you obviously don't know jack. 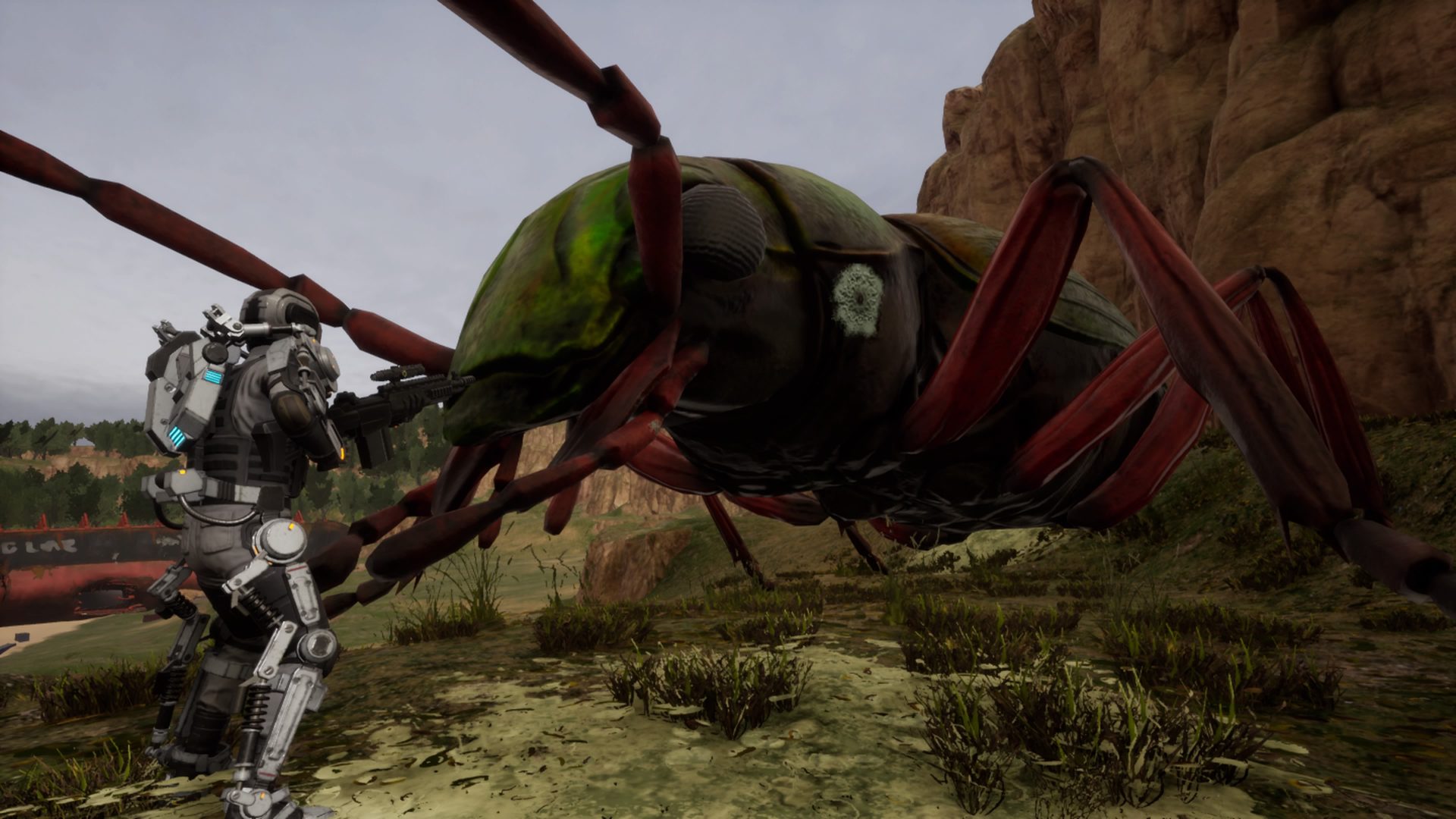 After customizing your character and loading them up with gear, the mayhem Iron Rain unleashes starts practically immediately. Swarms of giant ants, spiders, lightning bugs, scorpions, and other giant bugs come at you with barely a chance to breathe. Shooting them up will put some sort of stop to them, but as soon as you kill one, there's another seven or eight raring to gang up on you. Energy crystals will often drop once an insect's dead, which goes towards in-game currency that can be used to buy new gear and level up your solider.

Even on the easiest of settings, Earth Defense Force: Iron Rain will not play nice with you. Imagine your focusing on one of the giant alien robots that have arrived to destroy everything. While this goes on, a plethora of giant jumping spiders -- whom can give birth to medium-sized ones at any given moment -- start to surround you. The AI assist can help at times, but for the most part, you're fending off these giant monstrosities all on your own. And as your concentration is now directed at the giant spiders, that alien robot then decides to shoot its laser smack-dab in the center of your well-being. This will happen to you very, very often. 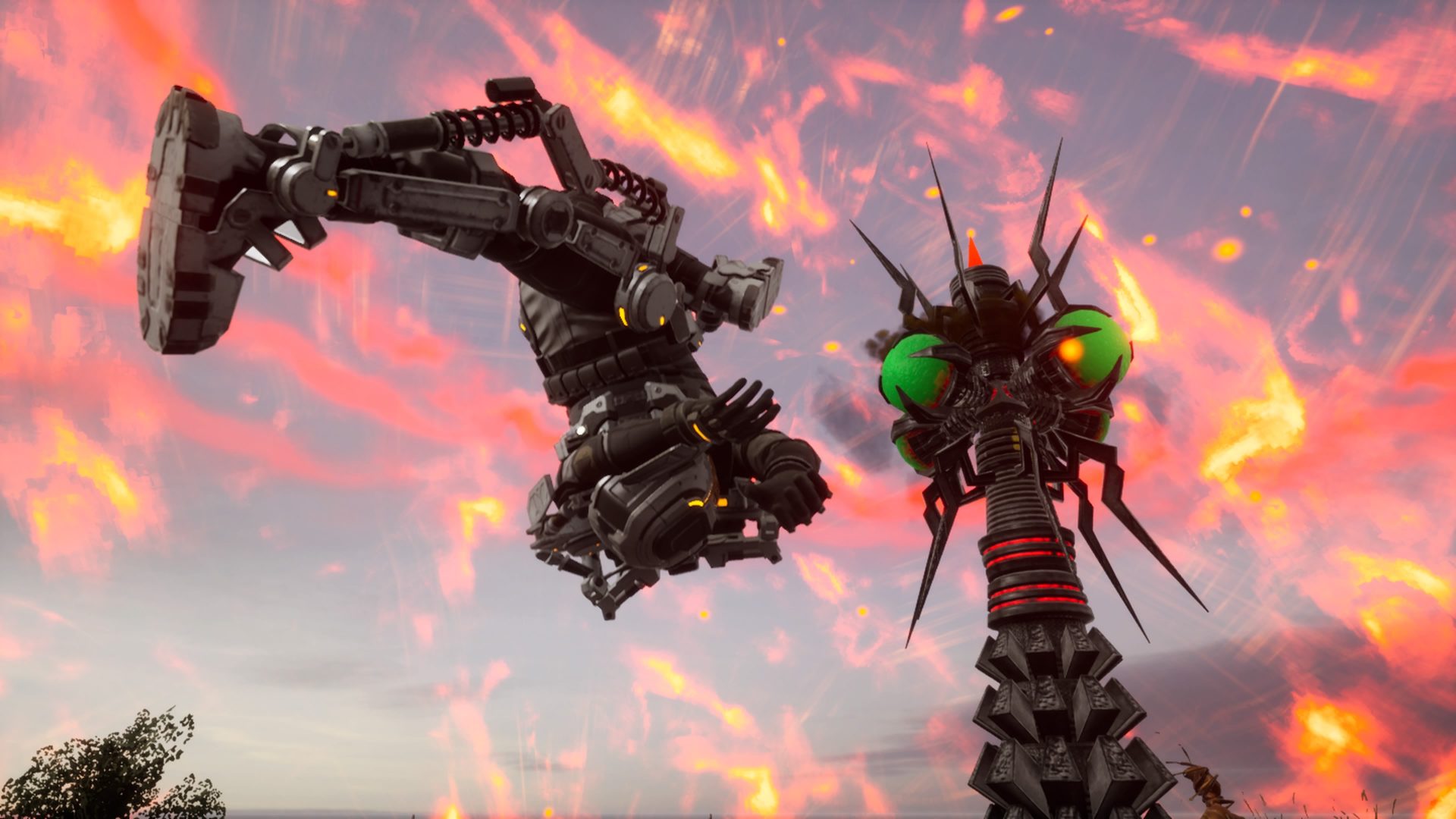 While there's the saying of "watching your six," Iron Rain forces you to keep your eyes on your entire clockwork perception. It never rests on its laurels, not until you kill every single last enemy in the area. It's fortunate that you're given unlimited ammo, because you'll be having your finger on the R2 button practically throughout its lengthy 52-mission campaign. From assault rifles and shotguns to grenade launchers and even laser swords, the types of bug-killing mechanisms you'll have on you are certainly all worth experimenting with when it comes time to jump into each mission.

As the story progresses, you can also unlock new armor that'll help in battle. From flying in the air to even be given a chance to control the giant bugs whilst riding them, this massive combat gear will aid you in many ways (especially when you need to evade enemy damage). You can customize this gear with unlockables and the likes, but it doesn't go too far into giving players the chance to concoct a unique appearance on the battlefield. (Ironic, considering how good Yuke's normally is with the create-a-character modes in its WWE 2K series.) 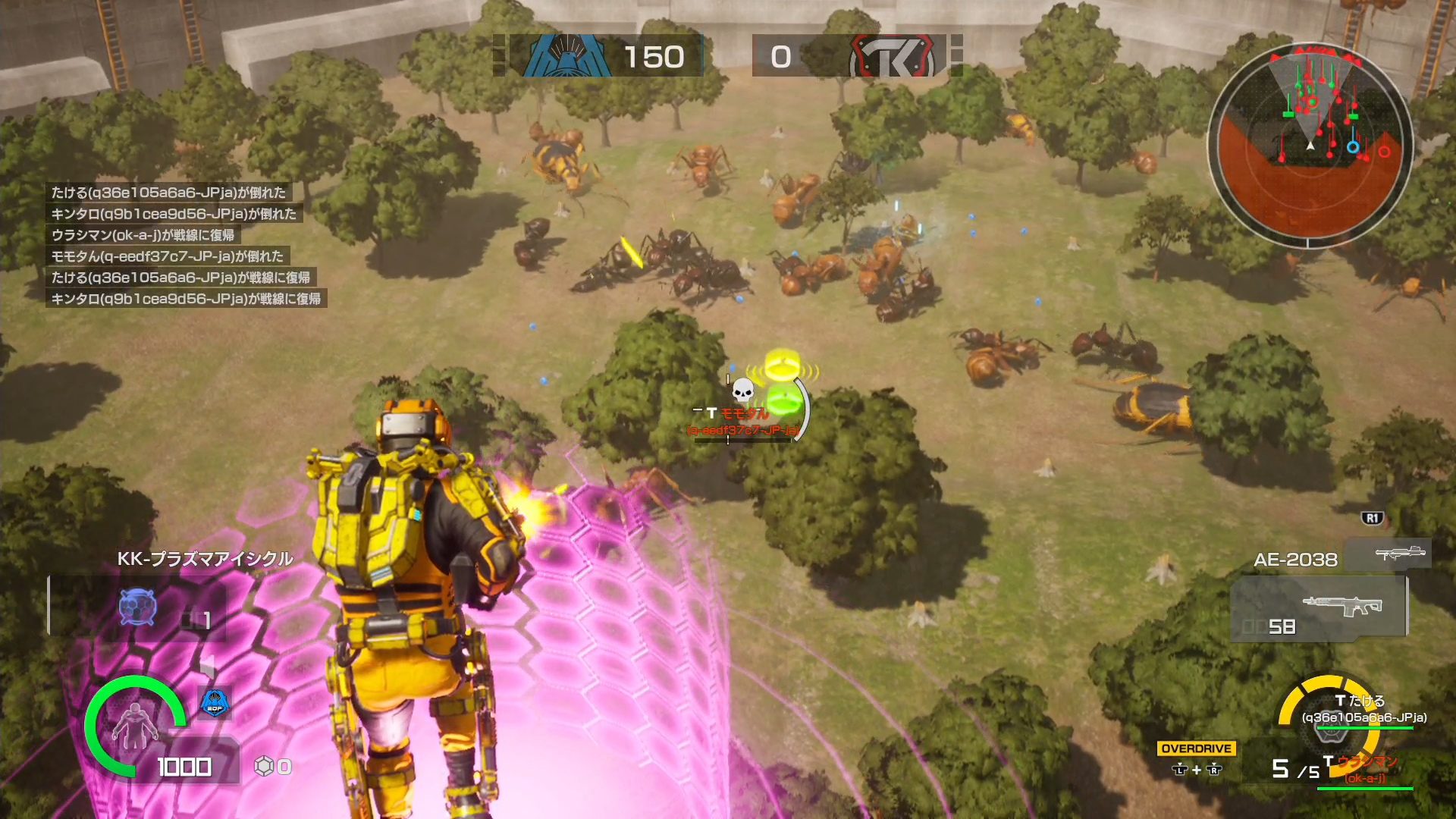 In regards to its tone, Iron Rain does take itself seriously with its battle aspects and characters, but not without some sort of humorous quip shouted here and there. Yes, the goofier aspects of Earth Defense Force have been alley-oop'd for the sake of a more focused story, but it still knows how to have a good laugh here and there. With that being said, this game knows exactly what it is, so whether or not the seriousness is just a slice of satire is up to one's own interpretation. Still, it does very fine job with telling the tale it wants to.

Gameplay-wise, there's never a dull moment to be had. Every level literally crawls with a plethora of giant bugs and bots for you to destroy, with them never holding back their punches. While it might get a little bit repetitive here and there, Iron Rain nonetheless keeps the adrenaline of each mission pumping thanks to a strong enemy AI and a great deal of weaponry to try one's hand at on the battlefield. The only downside is that the game can be very difficult even on the easiest of settings, so it may be frustrating for those not entirely good at third-person shooters. 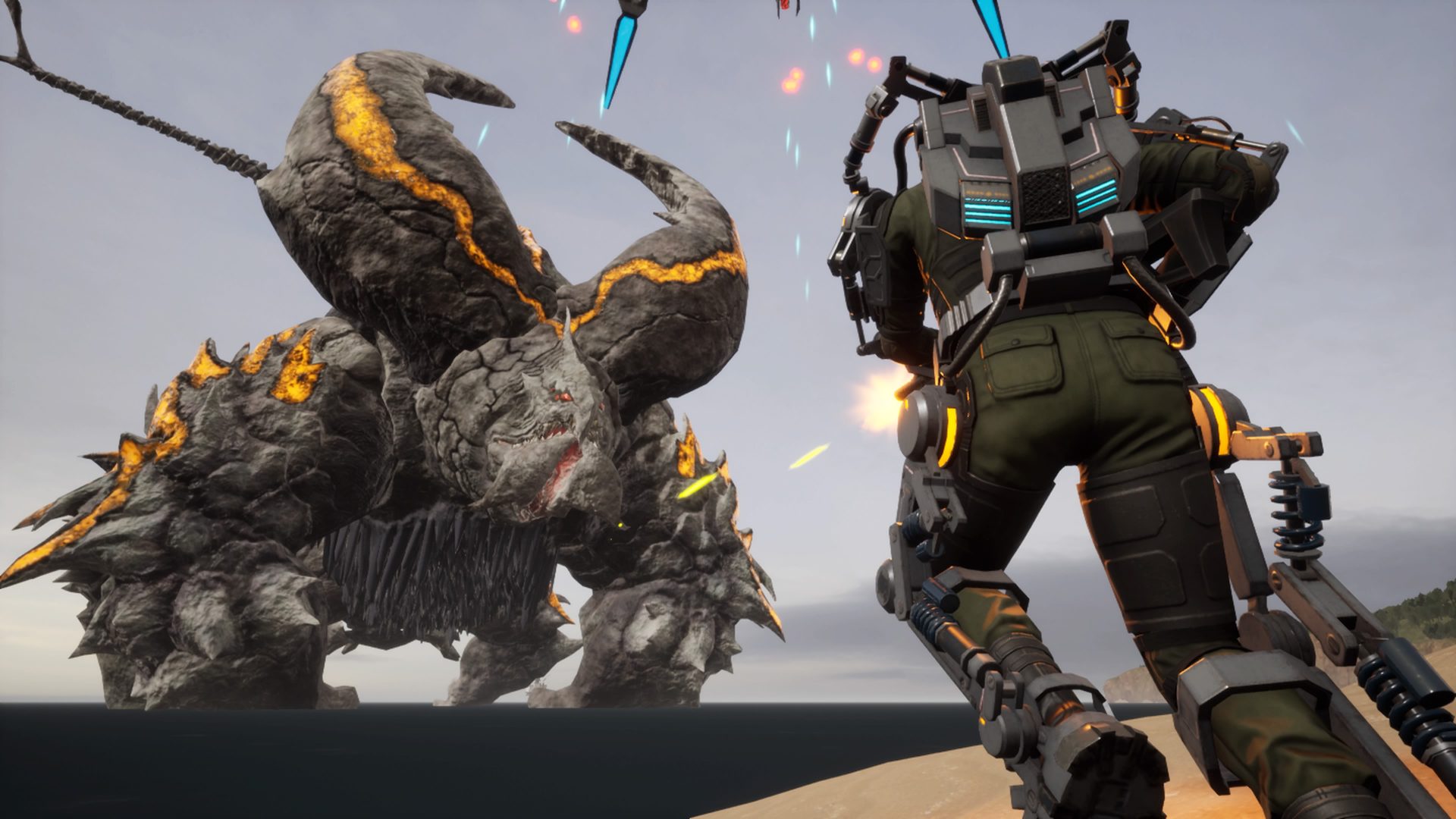 Graphically, Iron Rain looks wonderful. From the fullest of cities to the barren deserts, there's surprisingly a lot of detail placed in the mission's settings. The bugs themselves are a treat for the eyes, with their massive size adding more onto their creepier aspects. Watching them shrivel or explode as they die also gives way to some smile-inducing visuals, although the yellow and green goop that often sprays out of a dead bug might make some squeamish. However, I did notice that the framerate would drop here and there if too many bugs are on the screen at once, so prepare for a little slowdown during the game's more turmoil moments.

One nice aspect of Earth Defense Force: Iron Rain is the way you can play it. One can tread its story on their own, or they can grab a close friend for some two-player couch co-op. Players can also play the entire campaign or its mercenary mode online, with the option of joining a group or forming one's own. However, as of this writing, it's somewhat hard to find a solid online crew, as it appears that most of the players of this game are currently in Japan. (At most, I could only find five online groups at a time.)

Earth Defense Force: Iron Rain is an exciting and fun new installment in the series. With its challenging enemies and very lengthy campaign, the battle to save Earth hasn't been this thrilling and heart-pounding in quite awhile. One can only hope that Iron Rain continues onward, as it stands on its own as a wonderful new addition to the Earth Defense Force franchise!

Promotional consideration provided by Jeff Fong of ONE PR Studio