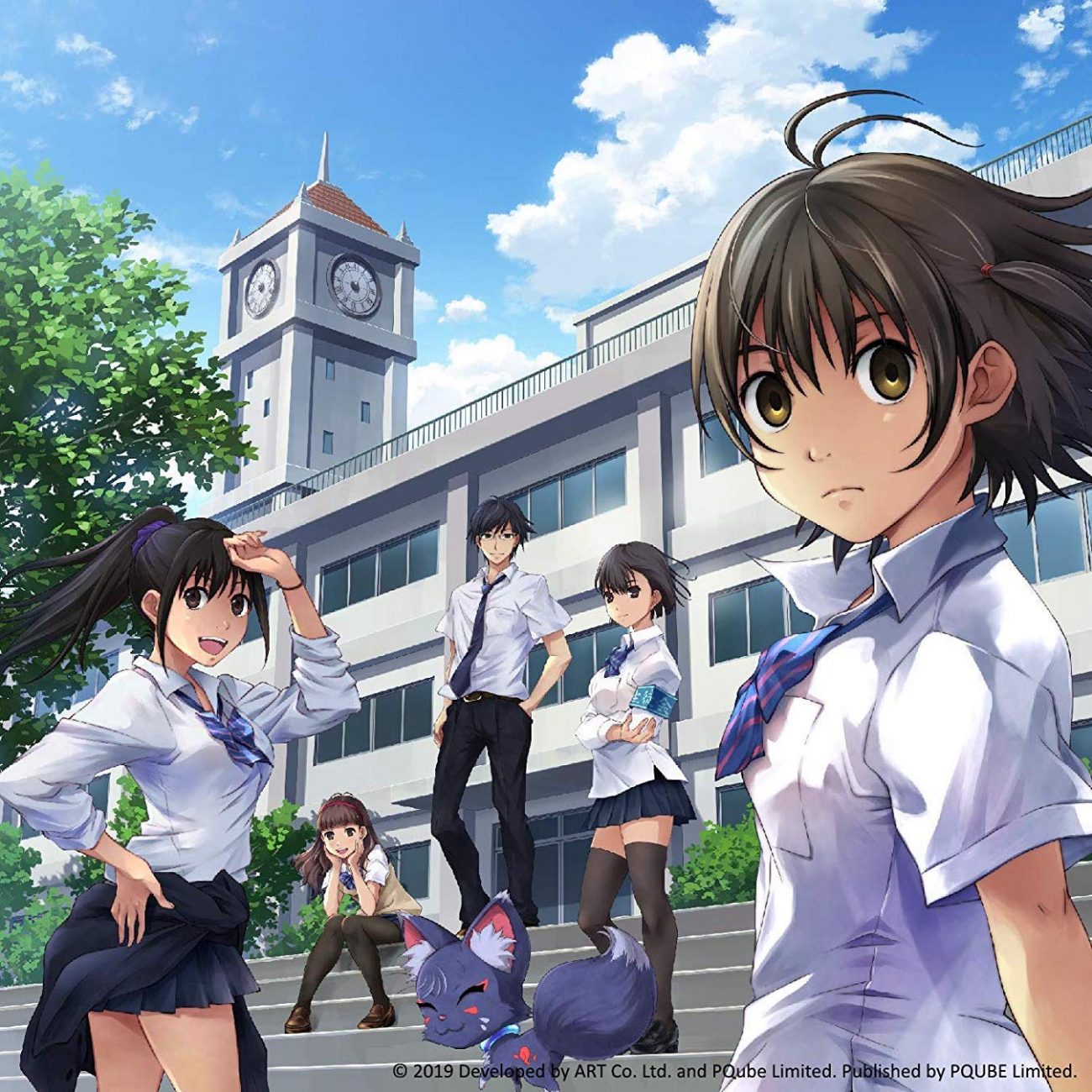 In anime and in visual novels, there are sometimes stories about schools with curses and mysteries. Some involve ghosts, others hexes from deceased students. In Kotodama: The 7 Mysteries of Fujisawa, the first original visual novel from PQUBE Games, these sorts of spooky stories are all tackled in one go. Surprisingly, it works...to a point.

Players take on the role of a new transfer student at Fujisawa Academy. There, you will be acquainted by Nanami, a hyperactive student who has a things for mysteries. With a little convincing, you join her and her close friend Wakaba’s Occult Research Club, as you attempt to find out the seven hidden secrets of Fujisawa Academy. From a Principal no one’s seemed to meet to a hidden Library of Wisdom, the mysteries that unfold will slowly be connected to one massive one towards the end. And, as you can guess, not every student & faculty member is who they seem. 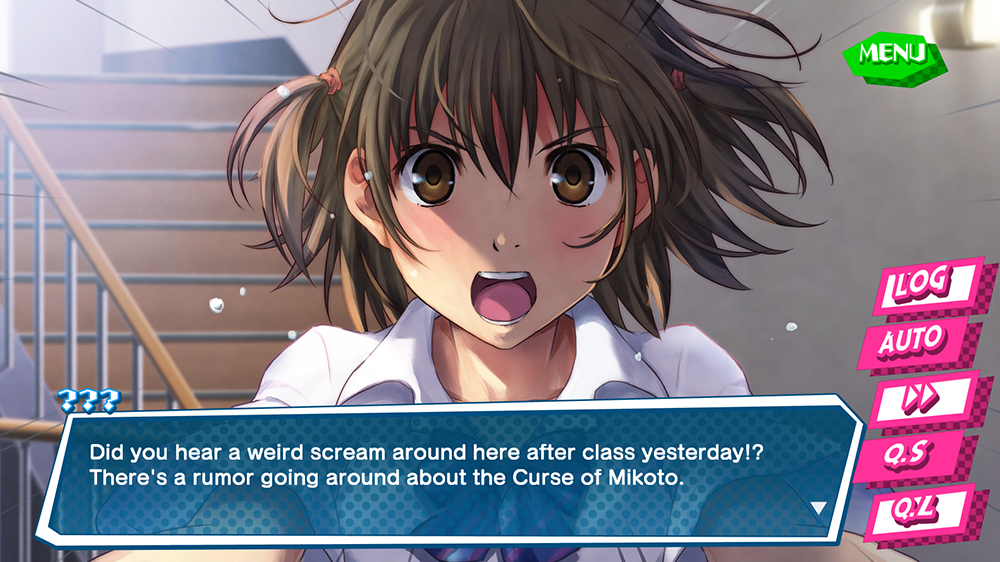 Of course, you have a little magic on your side. Before the events of the game, you’ve made a pact with an adorable fox demon named Mon-chan, who has given you the power to bring the truth out of those you are interrogating. That magic is brought you you in the form of a match-three puzzle game, where the more you poke for the facts, the more their clothes somehow magically come off. Yes, it has a similar vibe to HuniePop, with the eroticism knocked down a few tabs to earn it a Teen rating. And yet, it’s still a pretty fun mechanic, which beats having to sit and just read stuff nonstop like in the disappointing Our World is Ended.

At first, the story in Kotodama is pretty paint-by-numbers. The spastic personality of Nanami is something you’ve seen in many forms of Japanese entertainment, though her can-do attitude is quite affective. There are students hiding secrets involving animal cruelty and strange horoscopes being tweeted (or “quacked”, as it’s known here), all of whom wake out of their strange trance after some match-three fun. You also learn about Nanami’s close friend, who committed suicide a year before, a sort of plot device that’s appeared in a few visual novels I’ve played in the past. 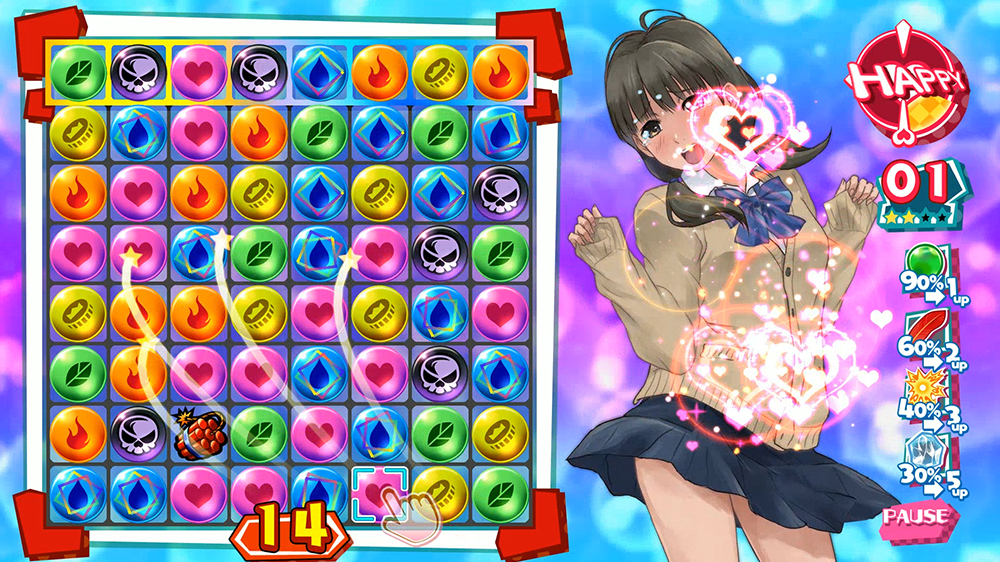 However, it’s when you’ve reached the end of Chapter Five when some things start looking more grim. Nanami’s dead eyes when talking about her friend give way to more dark secrets, and it goes far deeper than just a mere conspiracy theory. Soon, you and the rest of the campus find themselves wrapped in a crazy rage-filled epidemic. What you may find as you unravel the mystery will not only affect your friendship, but the entire state of the academy.

I was pretty surprised by how much Kotodama: The 7 Mysteries of Fujisawa managed to pull me in. The characters are pretty likable (until they aren’t), and the gameplay mechanics are enjoyable. There will be times where you’ll have to replay the story a few times over before you get the true ending, so it’s best to save often when you can. Otherwise, you’ll end up like me and be forced to start all over again. (Thank the gods for the dialogue skip option!) 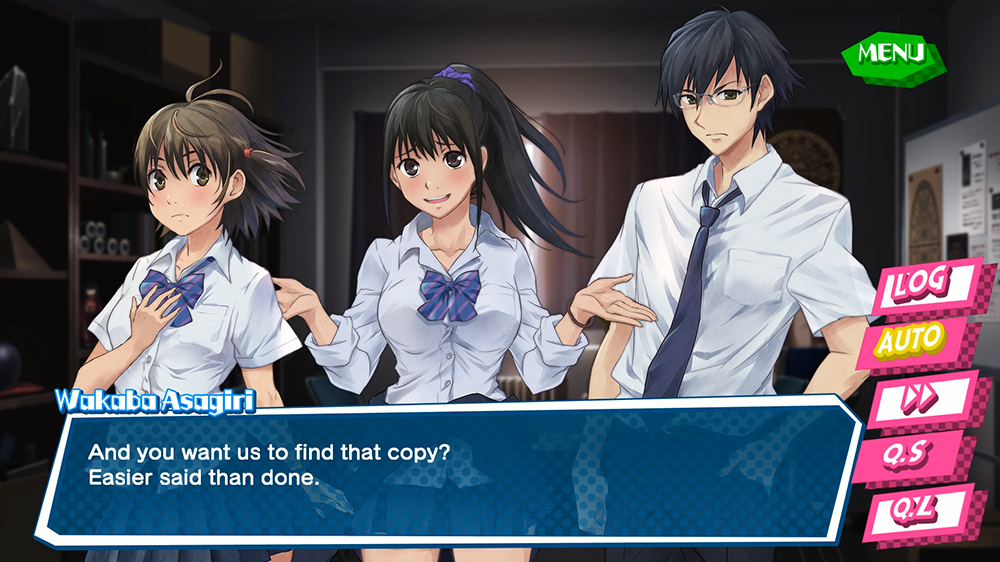 Visually, the game looks pretty okay. It doesn’t have the best artwork for a visual novel, but it’s still nice to look at. One can tell they did their best to emulate the Japanese style, and they nail it for the most part. However, certain facial expressions tend to fall victim to what I would like to call “DeviantArt Syndrome,” giving way to the fact that what you’re seeing if a bit of a façade appearance of a genuine Japanese visual novel.

If you play your cards right, you can complete Kotodama in roughly twelve hours. Even when the story is over, you can replay the match three aspect of the game against most of the main cast of the game. Those itching to be a true completionist will also want to seek out every pair of undies the characters wear to go the extra length to play some dress-up/dress-down.

Kotodama: The 7 Mysteries of Fujisawa may not be the most original visual novel out there, but it has its fun moments and good storytelling elements. For PQUBE’s first original IP, they do a very good job emulating the style and tone of a Japanese VN. With that being said, here’s hoping they iron out some of the wrinkles Kotodama had for future original games.