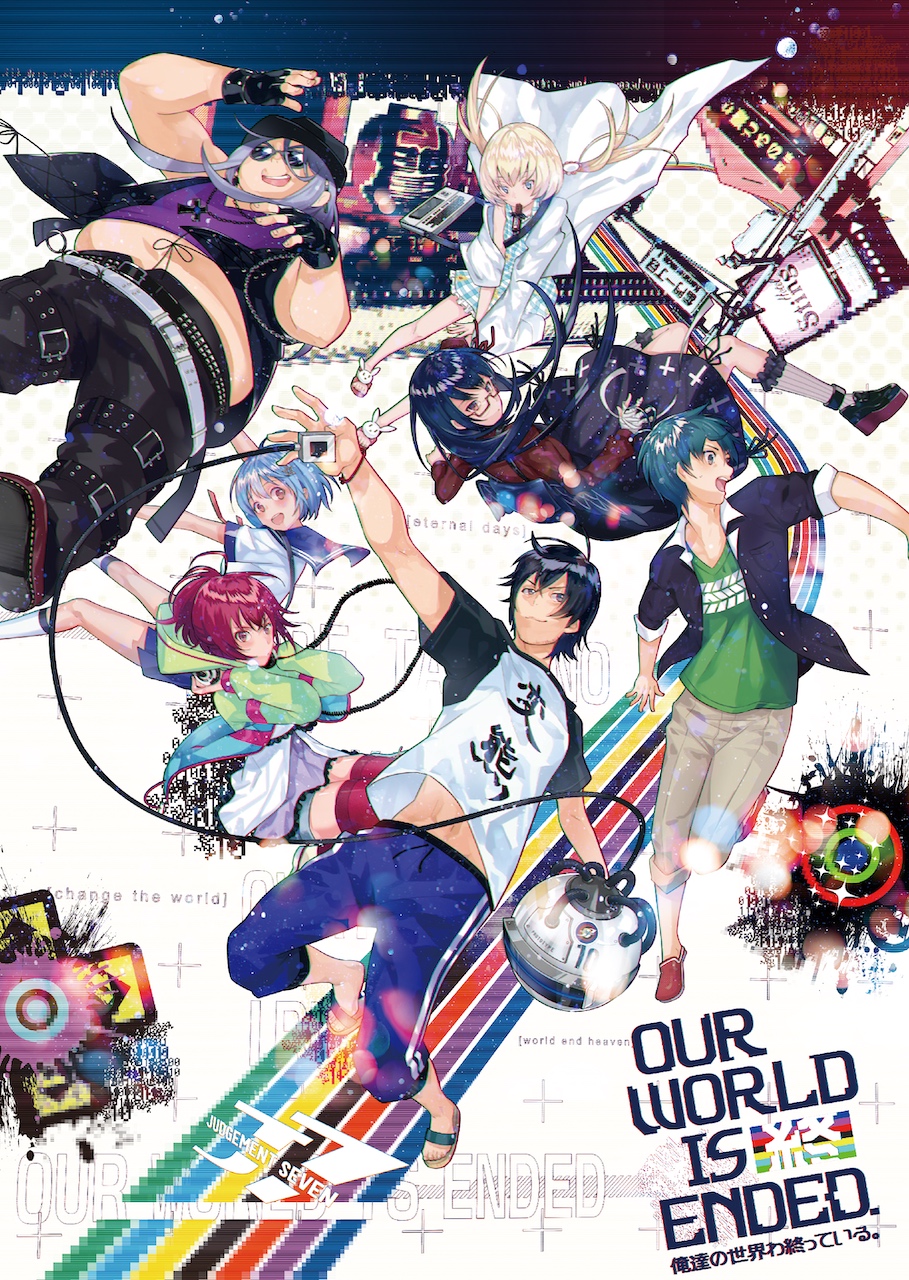 GAME REVIEW | "Our World is Ended" Stumbles With Story & Interactivity

On paper, a game like Our World is Ended sounds like it’d be a blast to experience. Take a team of game developers, and have them go face-off against creatures that roamed their past titles. However, even the brightest of ideas can find themselves dimming all too soon, especially when it doesn’t know how to hold an audience’s attention span. So the question remains: what went wrong with Our World is Ended?

Taking place in Asakusa, Our World is Ended focuses on a developer team that’s in the midst of crafting an innovated game engine. Dubbed Judgement 7, the crew works on an Augmented Reality headset that aims to change the landscape of whoever’s wearing it in real-time. While being the headset’s test monkey, Reiji is greeted with a disturbing image, one that involves having most of Japan wiped out by a mysterious incidence. That’s when things start getting really weird for the Judgement 7 team. 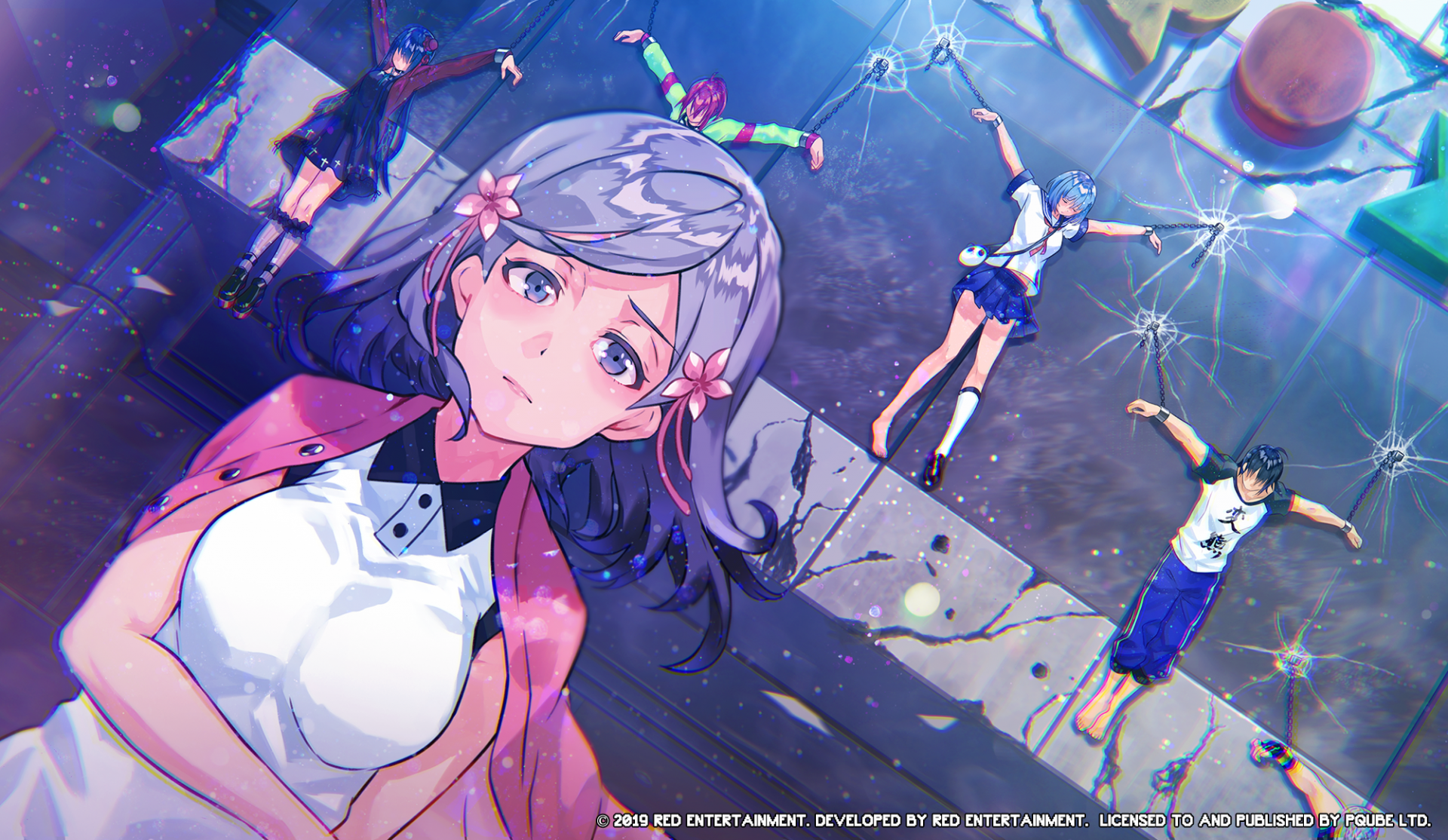 Soon Reiji, Yuno, and Asano find themselves unable to leave Asakusa, with the rest of the crew finding out for themselves the trouble that they’re in. Characters they’ve created in past games come to life right in front of their eyes, with everyone rushing to find a way to defeat them. The stranger these occurrences get, the more hot water Judgement 7 finds themselves in. With a crew comprising of some strange programmers and part-time assistants, the world does not seem to be in good hands.

At first, Our World is Ended starts off on a very good note. The characters you meet seem both likable and relatable, as they often joke about and leisurely take each task at hand. Even when they come across internet trolls bashing them, they hilariously attempt to overrun the comments pages and dox the living bejesus out of the webpages themselves. While some comments and jokes can raise an eyebrow or two due to their perverted nature, it’s often greeted with a sarcastic grin and an elbow to one’s side (especially when it comes to Owari’s mannerisms). 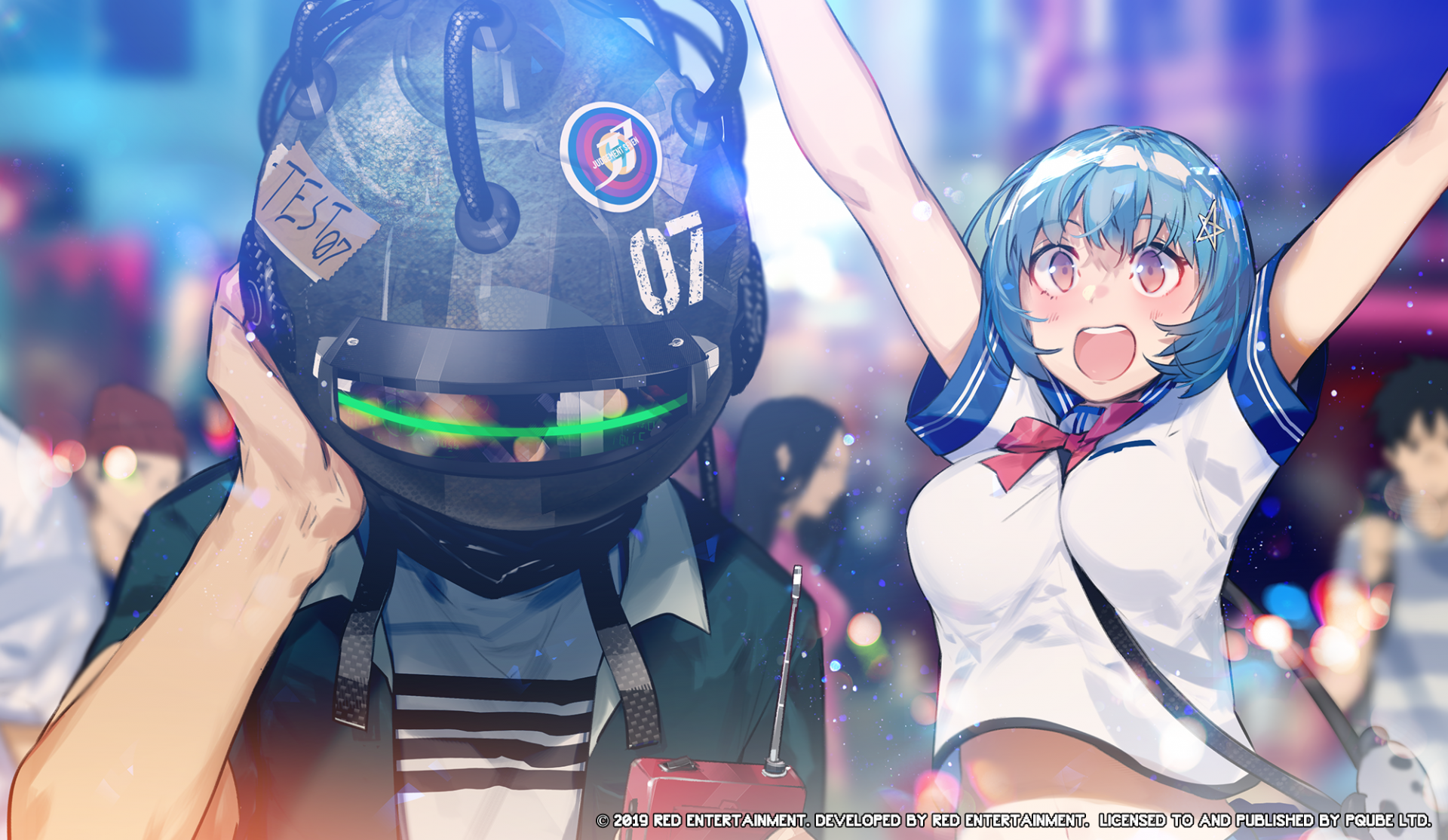 Sadly, this attitude quickly vanishes as the game progresses. For some reason, Our World is Ended often takes its players off the main route of the game, focusing on slice-of-life plot-lines rather than the save-the-world ones that they were promised. Normally such a thing wouldn’t be an issue, but as these storylines are mandatory to go through and not set up like side-quests, they often take the threat away of what’s happening with Reiji and the crew. And these stories — to be blunt — can get boring fast.

I’ve found myself getting more and more acquainted with visual novels as of late, thanks in part to many of them getting console releases. Titles like Song of Memories, VA-11 HALL-A, and even Tokyo School Life know how to grab the attention of its players, thanks in part to their great writing, likable characters, and — sometimes — unique gameplay. Often a visual novel just has you experience a story with very little interactivity, which is fine if you’ve got a solid tale to spin as the game progresses. Our World is Ended may have good characters, but it not only lacks a firm story to tell, but it has so little interactivity that you can basically play it on auto-pilot for the majority of the time. 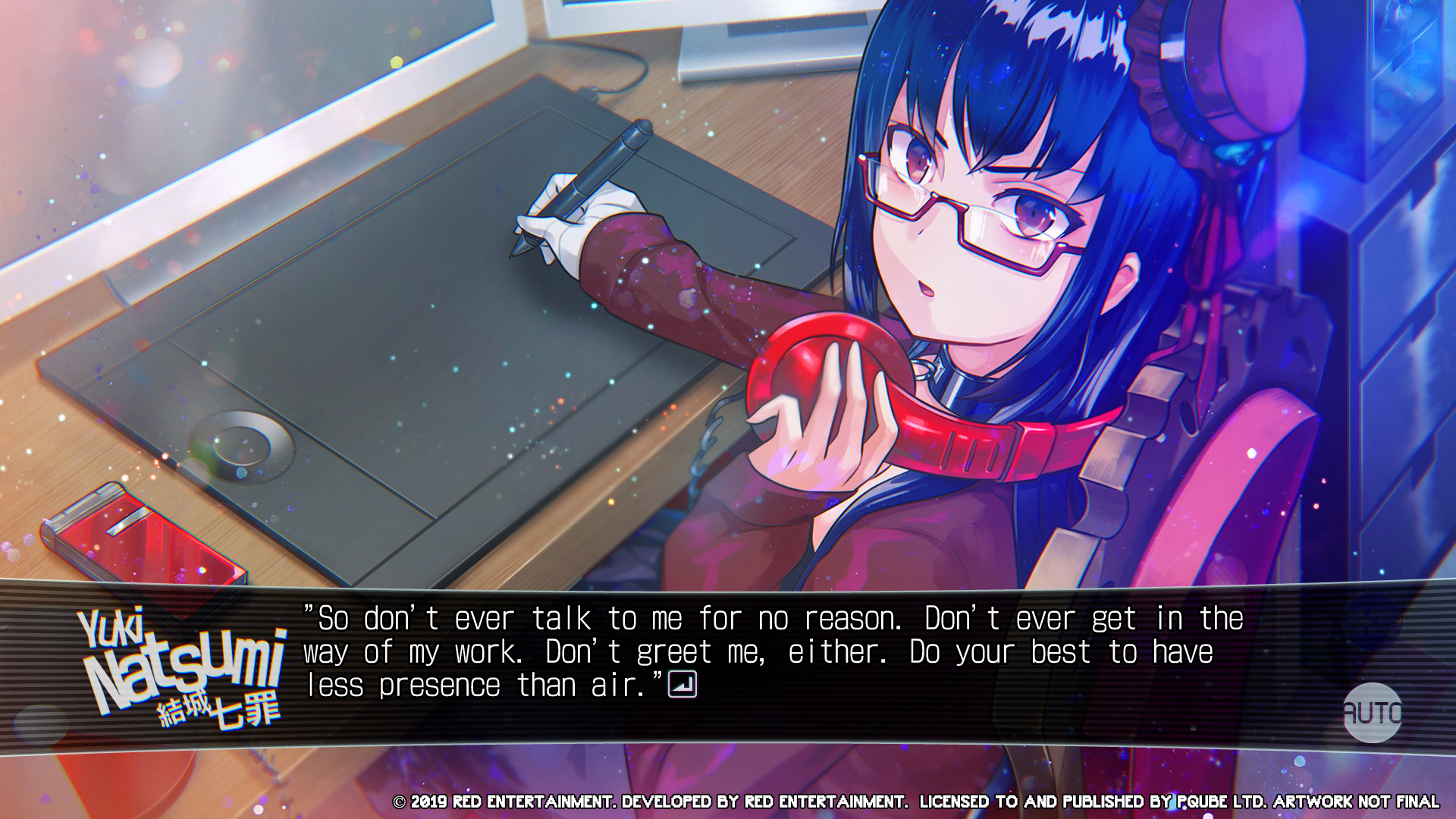 Considering that this comes from the same mind that brought us Sakura Wars, it’s pretty shocking how inept the narrative tends to be. While I do enjoy some of the banter between Reiji and Yuno, (not to mention a lot of the funny jokes and situations the folks in Judgement 7 are placed in), nothing in the story itself feels ironed out or exciting when it comes time for the crew to get serious. Even its fan-service, especially in the form of a very, very well-endowed elf girl, leaves me often shrugging at its existence rather than smirking like a total dork. Instead, I found myself yawning at what was occurring on-screen rather than immersed.

It’s a shame, because Our World is Ended has some good ideas. Unfortunately, how the story is being presented isn’t quite up to the standards as something involving an immersive world and some pretty bonkers scenarios. Situations like this may be better suited for something like an anime or even an action role-playing game in the same vein as 2017’s Akiba’s Beat. But alas, Red Entertainment has instead given us a visual novel that will have its viewers looking more at their watches than at what’s occurring on-screen. 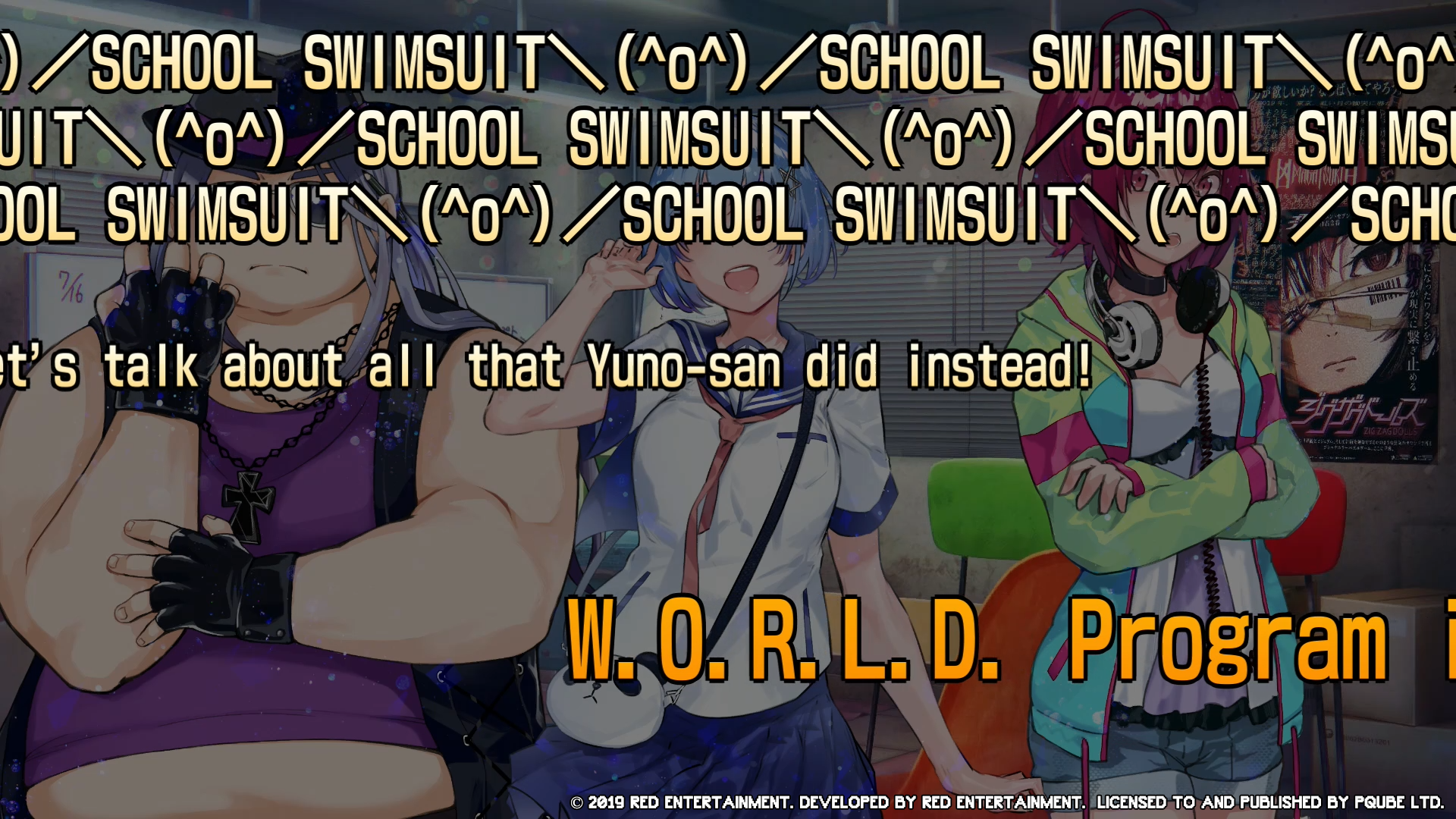 If you can get through Our World is Ended’s 20-hour campaign, you’ll soon discover that you can retool how things turn out depending on how you answer questions and react to certain aspects. Depending on how you feel about this game will make you wonder whether or not it’ll be worth it to find out how good or bad things may turn out to be. As for me, there are quite enough better visual novel experiences to go through again than what this managed to conjure up, and I’m not talking about a certain tentacled monster roaming late-night Akihabara!

Our World is Ended may have an interesting premise, but its execution falls short of being adequate. Its characters may have loads of personality, but Judgement 7 fails to initiate a good time despite their chummy mannerisms. Although Armageddon is far from ever happening, Our World is Ended makes you wish that giant meteor will come crashing down and end one’s boredom from playing such a visual novel!

Promotional consideration provided by Dominik Graner of PQUBE Games. Reviewed on the PS4.