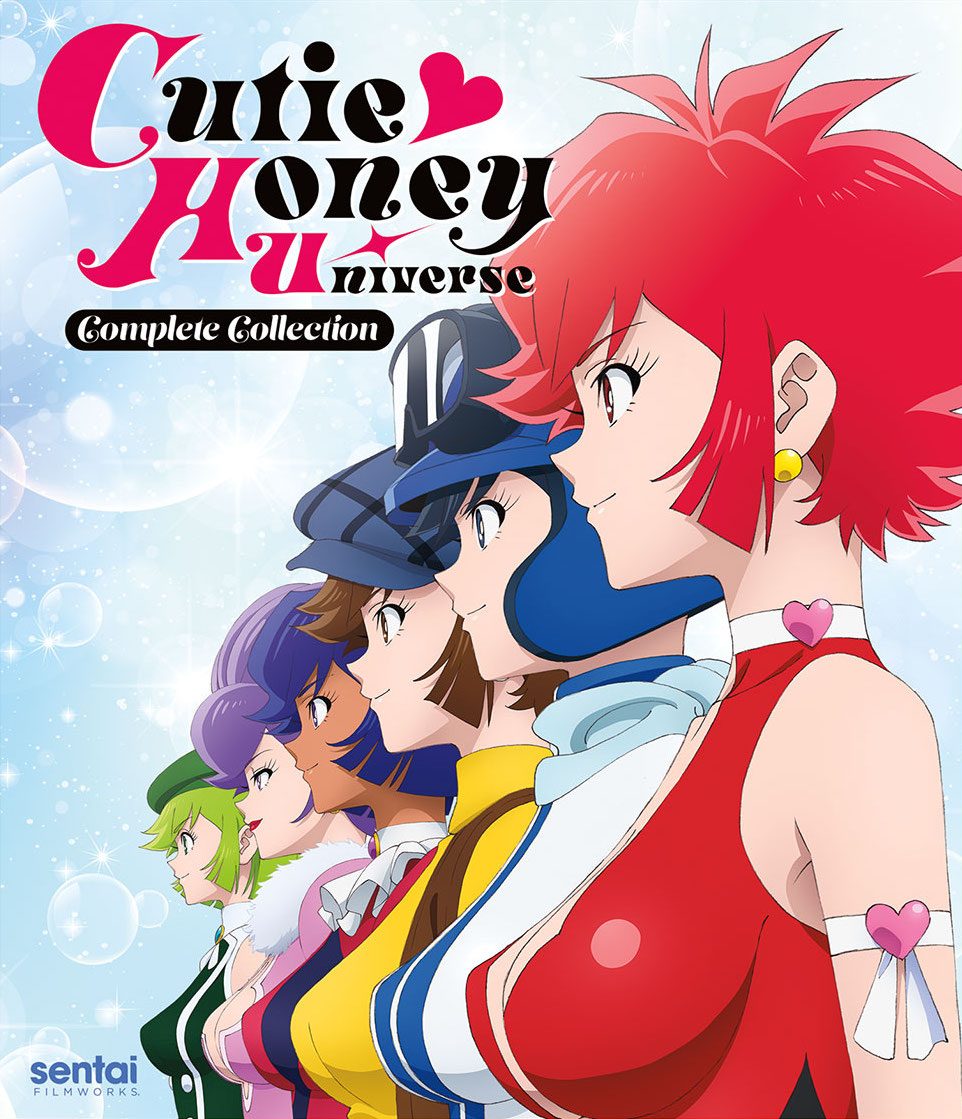 There are right ways and wrong ways to adapt classic anime & manga series, and no one has experienced both of those outcomes quite like Go Nagai. Last year alone, fans of his work witnessed new takes on his classics Devilman and Mazinger Z, both of which were hailed by critics as a beautiful nod to what he does best. So when Cutie Honey was announced to get the same treatment, many fans jumped for joy over what the original magical girl could accomplish in the modern world. Unfortunately, Cutie Honey Universe instead demonstrates how some storytellers don’t quite know how to adapt source material.

The fifth animated adaptation of Nagai’s creation, Cutie Honey Universe follows the titular character (Maaya Sakamoto/Jessica Calvello) as she attempts to thwart the evil organization Panther Claw and its leader Sister Jill (Atsuko Tanaka/Marissa Lenti). Panther Claw seeks Honey’s Airborne Element Fixing Device, a powerful mechanic placed in Honey by her father that allows her to transform and use her superpowers. With the aid of her friend Seiji (Shintaro Asanuma/Scott Gibbs) and his perverted dad Danbei (Kousei Tomita/John Swasey) and little bro Junpei (Yuka Terasaki/Amber Lee Connors), as well as Inspector Genet, Honey aims to save her friends, family, and world with a big dose of Honey Flash for all. 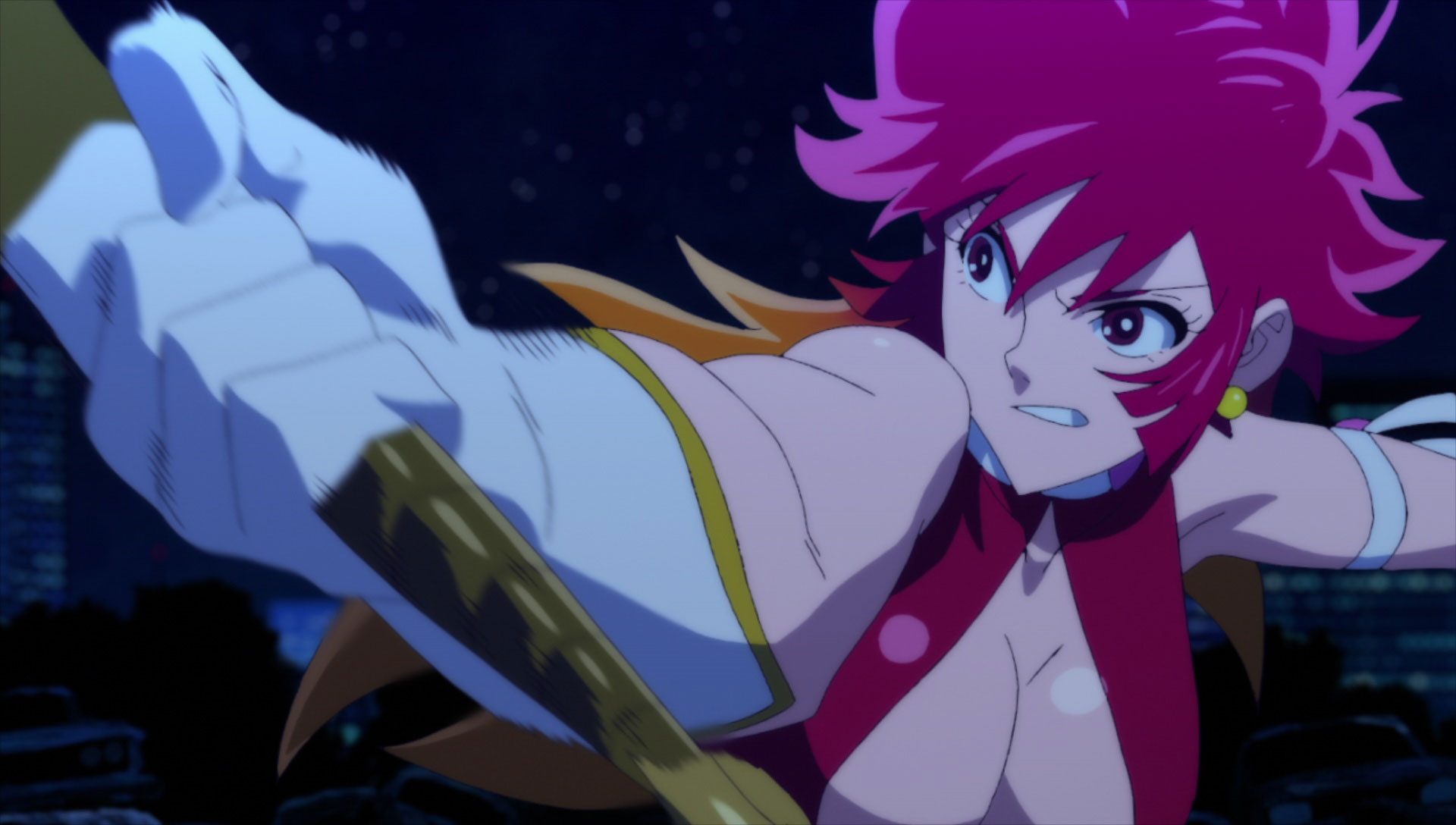 At first, this version of Cutie Honey stays true to the original series. It has its mixture of high-octane action with a good dose of naughty humor, a true trademark of Nagai’s work if there ever was one. Never is it afraid to dive into the latter aspect, with Danbei and Junpei going down naughty roads for Honey in the most raunchiest of ways. Even Honey’s relationship with classmate Natsuko (Yui Horie/Bryn Apprill), while sweet for the most part, can often dive into some blush-induced teasing between the two of them.

Action-wise, Universe shines its brightest when Cutie Honey throws down against Panther Claw. Watching her take down bandits and monsters of all shapes and sizes delivers an excitable spectacle for fans to enjoy. Every punch, kick, swipe, and stab is captured with some stylistic flair, perhaps a nod to the series’s 1970s roots. It’s often cool, with a hint of silliness for good measure when the time calls for it. 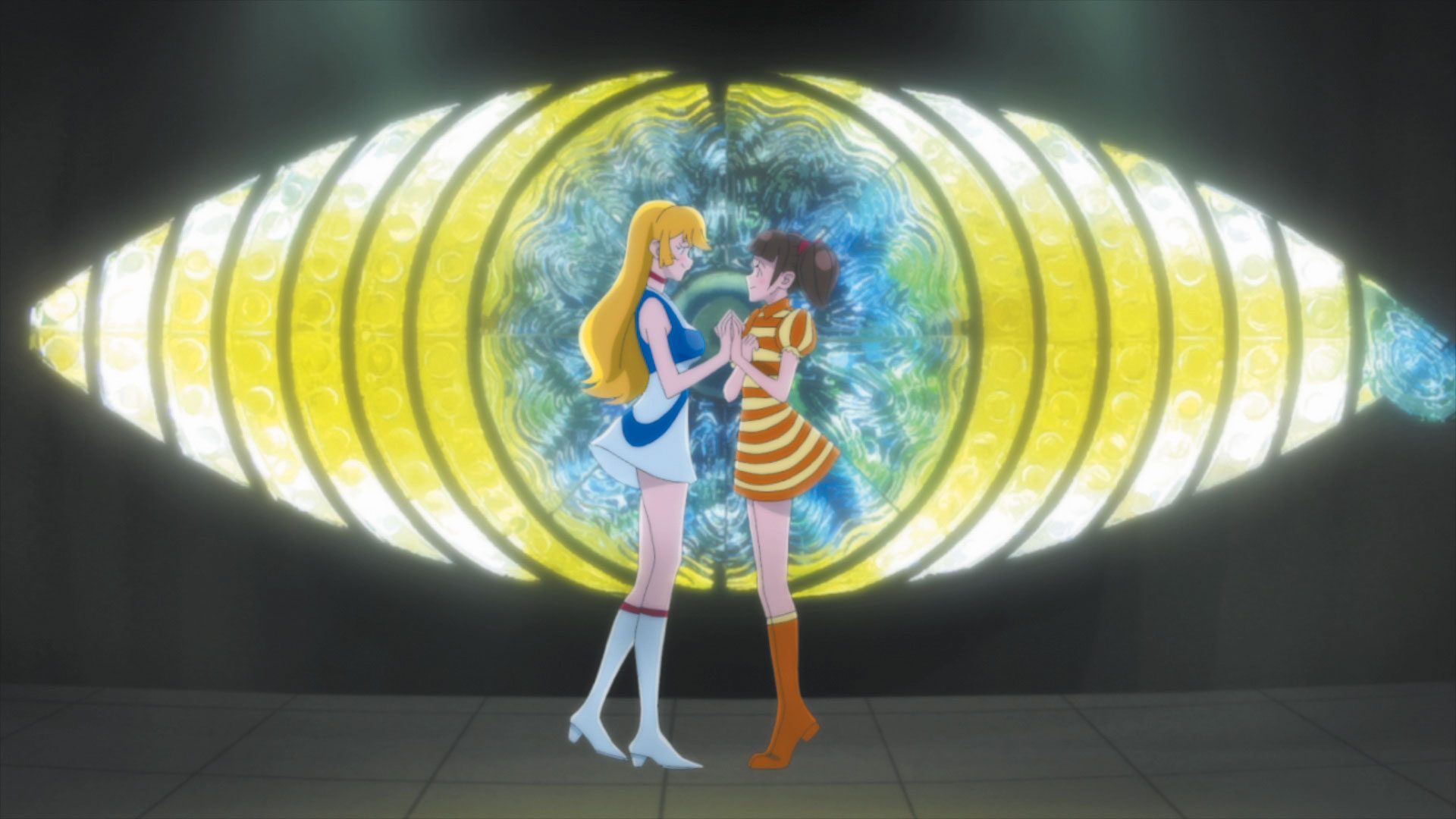 However, as for its overall storyline, this adaptation seems to not know what it wants to be. Fans of the original series knows that the tale of Honey Kisaragi was never meant to be taken seriously. Yes, it had some brutal deaths and the like, but most of the gore was presented through a very humorous scope. So when the tone changes halfway through Cutie Honey Universe’s twelve-episode run, it comes off slightly shaky.

Death, destruction, and some heartbreaking moments occur throughout, but it never feels right for what Cutie Honey stands for and represents in the anime & manga realm. As odd as it sounds, it somewhat betrays Nagai’s original vision as a feel-good series, one that entertains the boys for various reasons and gives girls a reason to show that they can be just as strong (maybe stronger) as the opposite sex. And perhaps that’s where Cutie Honey Universe seems to stumble, as it takes a carefree and fun story and attempts to jam in unnecessary darkness throughout its plotline. 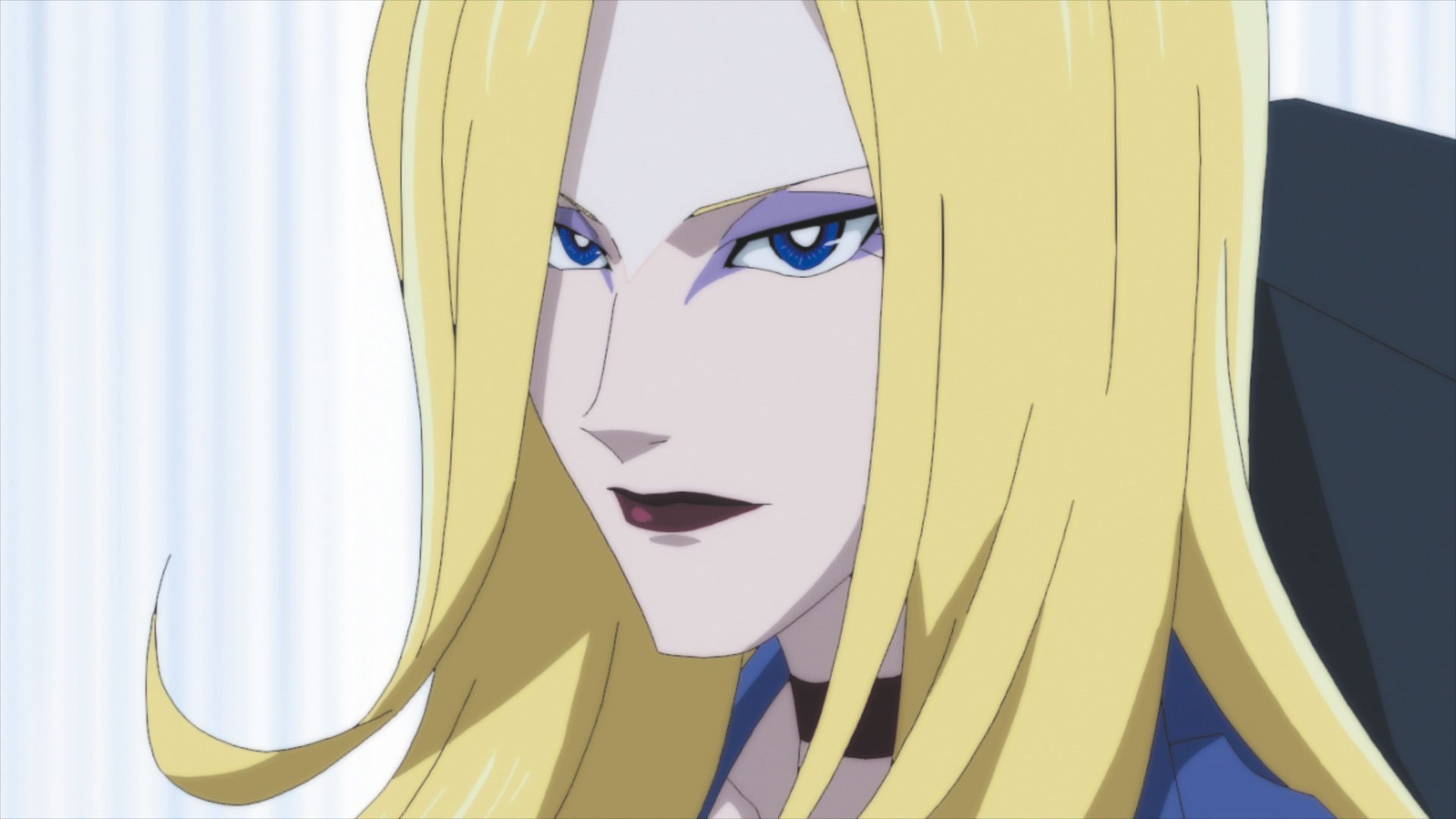 That’s not to say it’s terrible. There are some great aspects to the story that are pretty clever. One such plot device is how Sister Jill infiltrates Cutie Honey by posing as Inspector Genet. Never does she let it be known to Honey that she’s the true enemy, going so far as killing her own Panther Claw minions to keep up appearances. It sometimes gets to a point where viewers will wonder if the villain really wants to take down Honey, or even go so far as destroy her own evil organization for the greater good.

Plus, unlike the plethora of Cutie Honey manga series out there, we can at least be thankful that it has a legit ending to it. While I cannot spoil it here, it actually does a pretty good job bringing everything together and sealing over some of the plot’s cracks. Even having Panther Claw members Tarantula (Rie Kugimiya/Brittney Karbowski) and Dragon (Chiaki Takahashi/Morgan Berry) switching to the ally’s side adds a bit of humanity into the monsters that Jill has created through her lustful ways. So while it has its flaws, Cutie Honey Universe can proudly say it makes a fine landing. 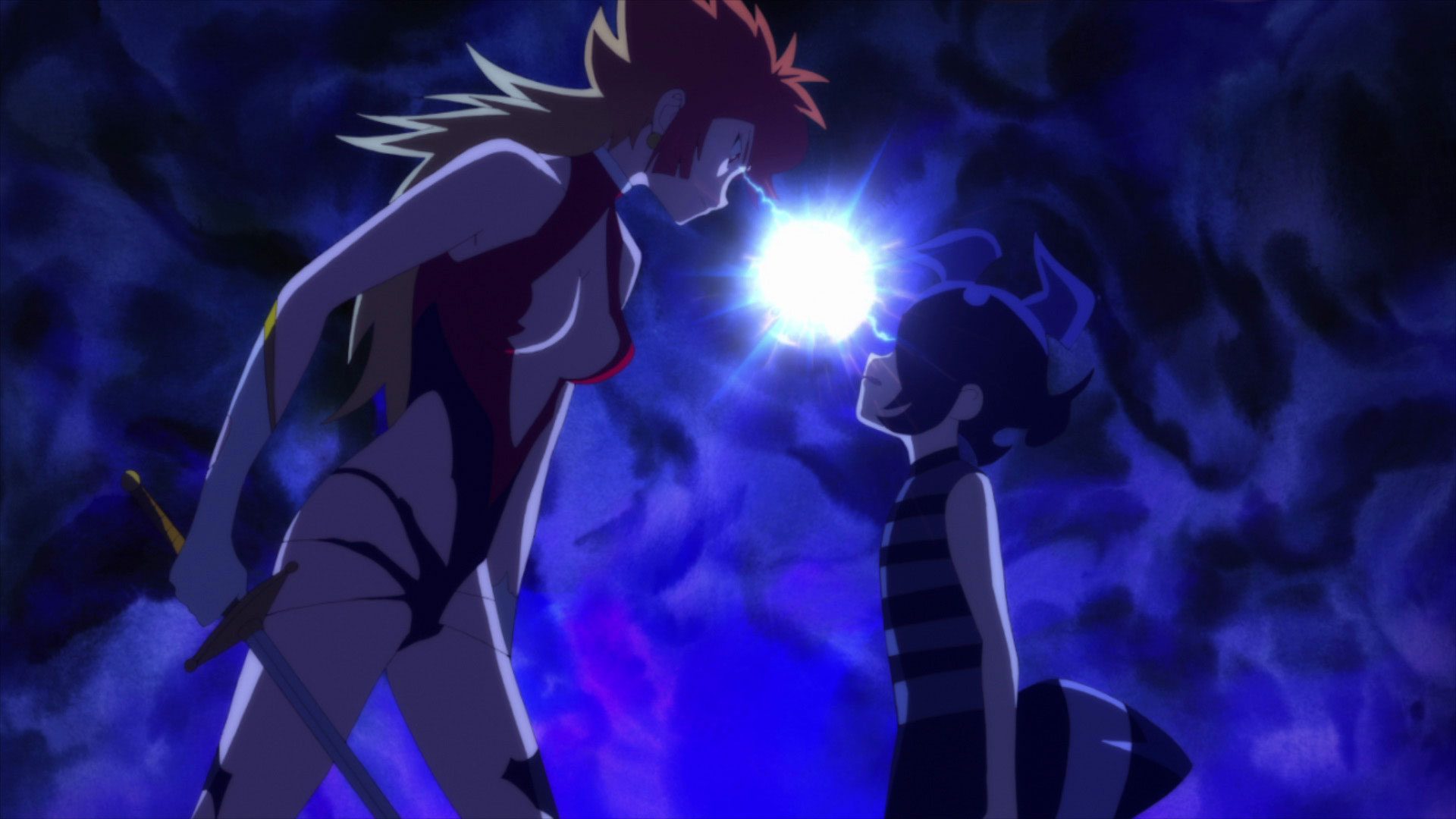 Although its action sequences shine throughout, much of the rest of the animation is pretty stale. Production Reed (Vampire Hunter D, Apocalypse Zero) knows how to get some good fights down, but when characters are sitting/standing around having conversations, its quality becomes choppy and a little warped. Even with its uncensored bits, some of the characters just look a bit too elastic for its modern look. (If it had done the adaption with a visual style like that of the original manga, then said elastic style would’ve fit in perfectly.)

As for the voice acting, both the Japanese and English dubs have some pretty good talents behind the mic. Sakamoto and Calvello do a terrific job with the can-do attitude and flashy personality of Honey. The evil oozes out of the vocal works of Tanaka and Lenti as they take on the role of Sister Jill and her Genet alter-ego. Duos Tomita & Terasaki and Swasey & Connors get the right amount of perverted naughtiness in their performances as Danbei & Junpei. 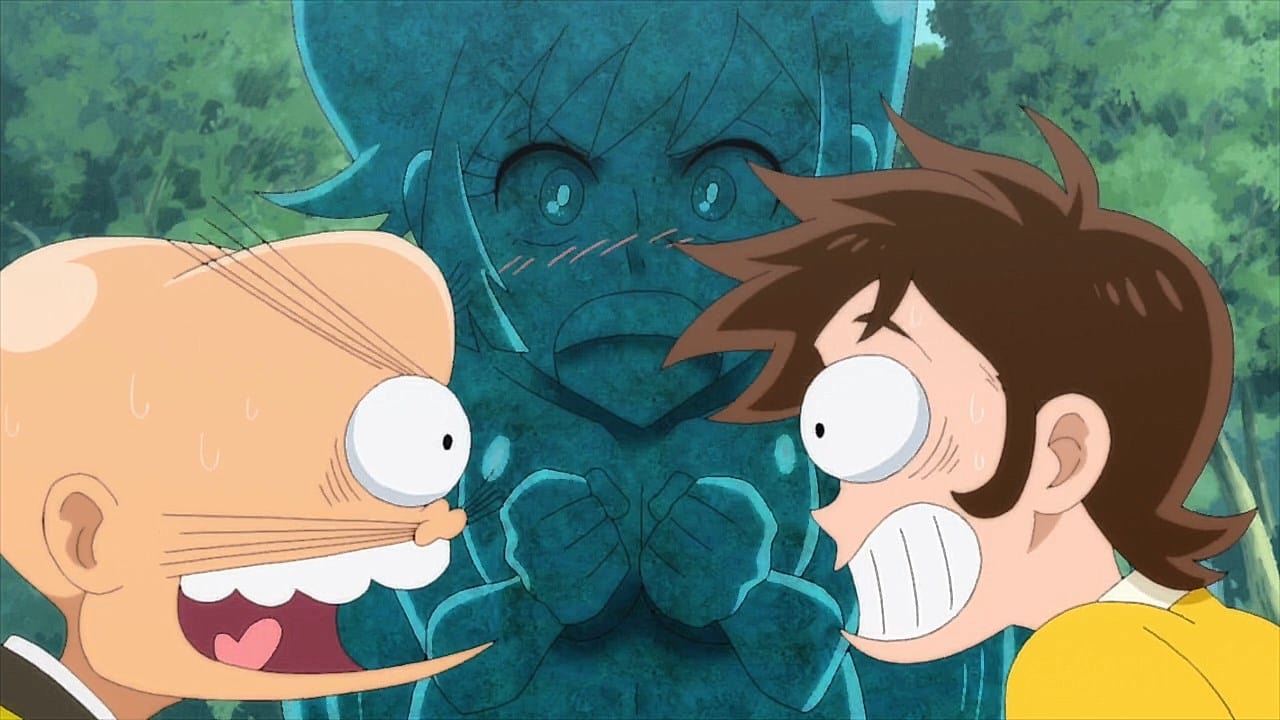 With that being said, the Japanese dub has the upper hand over the English one. With Cutie Honey’s different personas come different voices, as Maaya Uchida, Kana Hanazawa, and Tomoyo Kurosawa take the reins from Sakamoto to give way to pure incognito disguises. In the English dub, Calvello (who previously played Honey in ADV Films' New Cutie Honey dub)  plays every persona, and while she does it well, it’s not exactly hiding the fact that it’s Honey in disguise. A shame, since Sentai Filmworks has an army of talented voice actresses who could’ve come in to play these different forms of our heroine.

Perhaps the best thing about Cutie Honey Universe has to be its soundtrack. Composed by Masato Nakayama (We Never Learn), the score is ripe with a great assortment of lo-fi hip-hop, funk, electronica, and smooth jazz. Not only does it pay tribute to the sounds of Cutie Honey’s original era, but it mixes wonderfully with the music of the modern age. Opening theme “Ai ga Nakucha Tatakaenai” by AOP is nowhere near as classic as the original Cutie Honey theme song, but it’s bouncy and catchy nonetheless. Show closer “SISTER” by luz has a cool big band vibe that’d make fans of Big Bad Voodoo Daddy tap their toes with glee.

Cutie Honey Universe may be a bit of a mess, but it has its good moments here and there. A wonderful hero, a memorable villain, and a plethora of action and naughty fun just barely outweigh the awkward serious tone it attempts to create halfway through its run. While Devilman Crybaby and Mazinger Z: Infinity will more than likely be the talk of the town when it comes to Go Nagai’s new adaptations, Cutie Honey Universe will probably be best remembered as the “just okay” one of the three reboots & continuations.

GAME REVIEW | Bee Protected and Be...