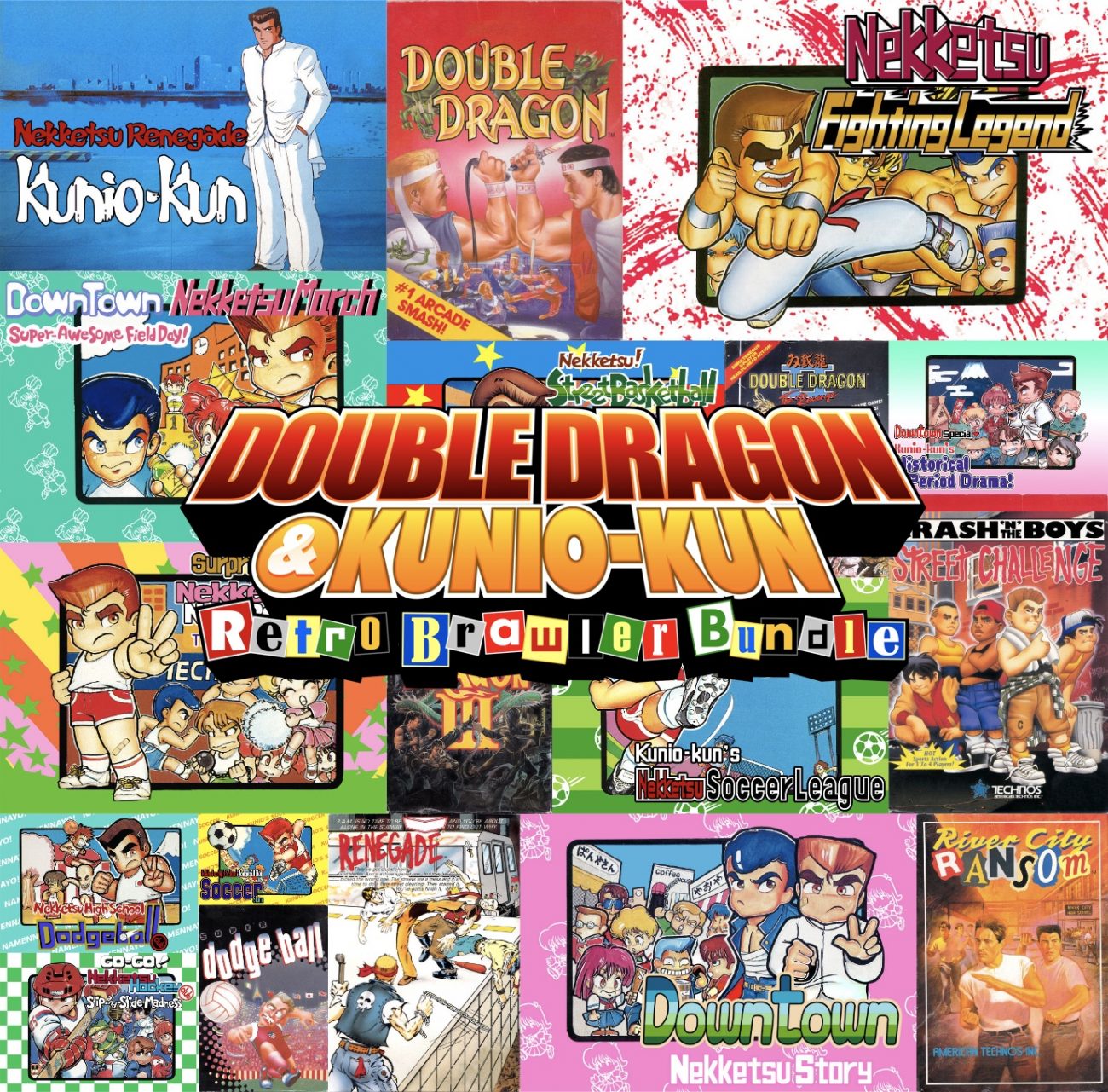 They say patience is virtue, and no one knows that quite like the Western fanbase of the Kunio-kun franchise. For decades, Kunio’s adventures in US have been slightly under par compared to what Japan was given, with only four of his 15 NES-era titles reaching stateside. Now over three decades later, the king of River City has finally made things right, with some assistance from the Lee brothers.

Featuring 18 games, the Double Dragon & Kunio-kun Retro Brawler Bundle is a massive treasure trove of some of Technōs Japan’s finest work on the NES. With Arc System Works now owning these franchises, Kunio and Jimmy & Billy Lee have been dusted off and given a good ole spit shine for fans & newcomers alike to experience. Plus, officially for the first time ever, eleven Japan-exclusive Kunio-kun games have arrived for the rest of the world to experience. From the original title Nekketsu Renegade Kunio-kun and the Edo-era Downtown Special Kunio-kun’s Historic Period Drama! to all of the dodgeball, basketball, and hockey games, these titles have been fully translated into English for everyone to give a go! 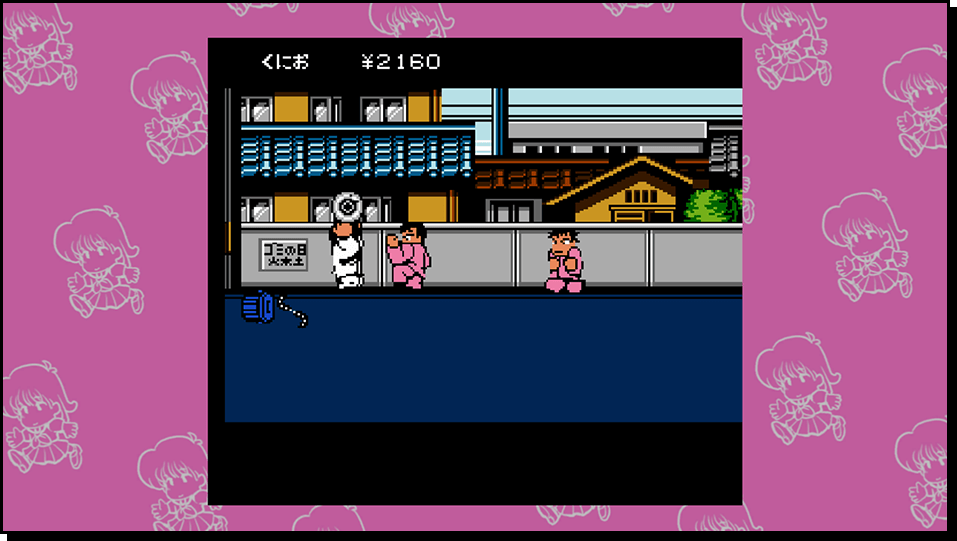 How eclectic Kunio’s adventures have been! Most people know him from Renegade and River City Ransom, but the plethora of sports and theatrical events he’s taken on is quite staggering. Outside of Super Mario himself, I can’t think of another video game character who has put his fingers into so many tasty pies. And surprisingly, they stay true to what Kunio has symbolized since the very beginning. He’s a rule-breaker willing to lay down some punks in the name of good, but he tries to be fair.

Yes, he may throw some punches on the basketball court (Nekketsu! Street Basketball All-Out Dunk Heroes), and his celebratory antics on the soccer field would give him a yellow card (Kunio-kun’s Nekketsu Soccer League). But you can’t help but love this brute and all that he wishes to accomplish. Everywhere he goes, he leaves smiles on the faces of the innocent and “BARF!” sounds out of the throats of the baddies. To be able to experience Kunio’s full Nintendo/Famicom legacy here in the States is something retro gamers everywhere should be cheering about, and then some! 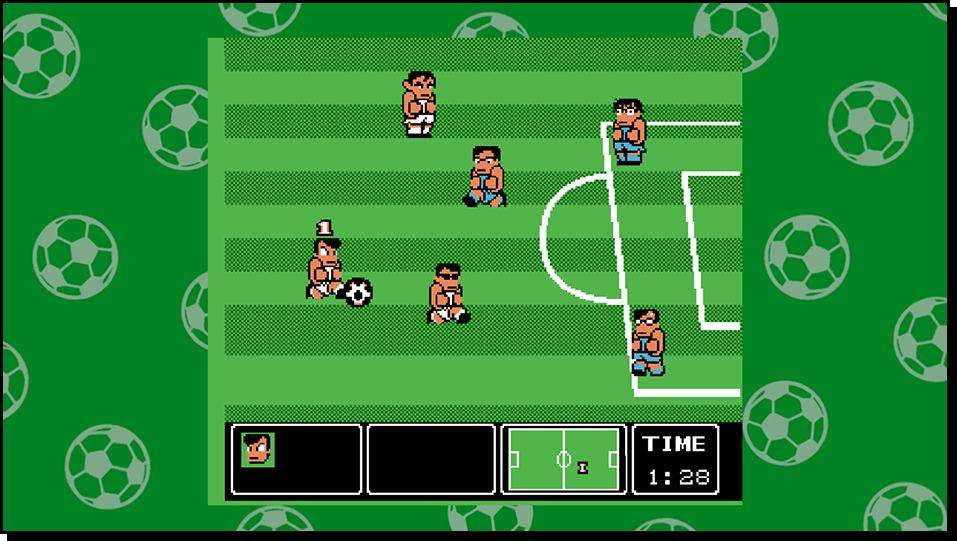 To be able to cover every single one of these Kunio-kun games in a single article is a daunting task. The four we got to experience in the States are just as fun and zany as they were in the 80s and 90s. As for the eleven that are new to us, many of them deliver a lot of exciting and humorous gameplay that any fan of old-school side-scrollers and the like will enjoy. Although we’re more used to Kunio’s brawling antics, it’s the sports games that shine the most, with Super Awesome Field Day! and Hockey Club Slip-and-Slide Madness being a couple of the franchise’s best.

It’s interesting that Double Dragon is here at all in this collection, as these three titles seem more like an added bonus than anything else. However, there are no complaints here, as playing as the Lee brothers once again will surely get players excited to deliver some street-stained beat downs! Arc System Works has ironed out all of the kinks and bugs from the original trilogy (as well as all of the Kunio-kun titles), giving off a more smooth gameplay experience overall. But if players wish to experience the old-school way with the original balance settings, then they can switch to these versions no problem. 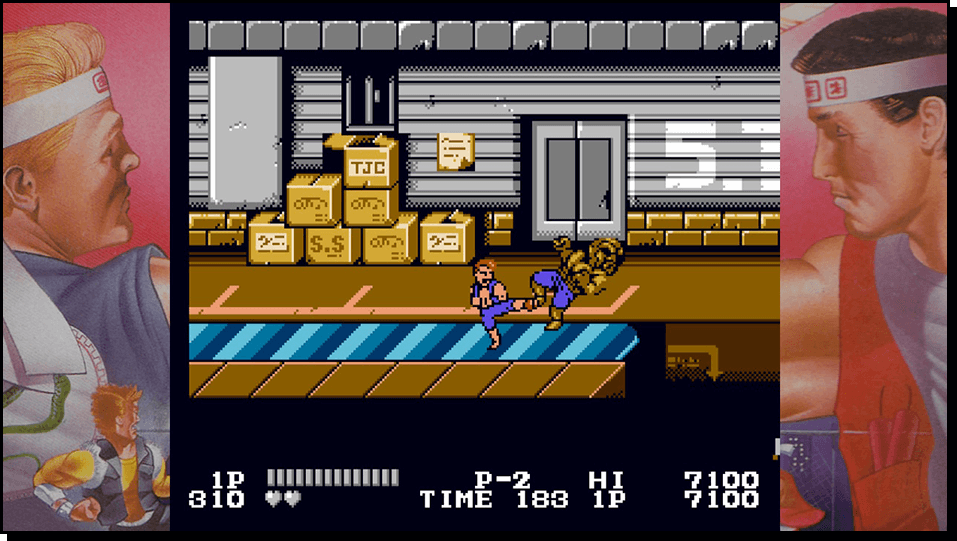 Control-wise, it does take a while to get used to playing these games on the newer consoles. You’re bound to make some errors here and there, especially when the NES Start button’s been placed on the X button. I often found it easier to play on the D-pad rather than the Joy-Con stick, as it felt more natural to what the game was like back in the day. (Also, each game’s manual is placed in the collection’s options screen, thereby keeping any player from diving in to each title blindly.)

Those looking to play these game online rather than co-op can do so with ease via its Online Mode. However, as of this writing, the online base appears to be nonexistent. During my time with my game, I found it almost impossible to find somebody else to do a little co-op with. A shame, considering the plethora of history and gaming goodness that these titles have to offer, even over 30 years since they were first released.

Anyone who has waited to see all of Kunio’s NES escapades come to the US should be excited about the Double Dragon & Kunio-kun Retro Brawler Bundle. With over a dozen of classic and new (to the US) games to play, this collection demonstrates the staying power both of the renegade and the Brothers Lee. They’re fun, eclectic, and — most important of all — timeless!