HomeVideo GamesAdults Play with Pokemon Too
by: Hamsterman2049
0
Video Games

Hello out there internet.  Hamsterman2049 here.  I know, we’ve never met, so before I launch right into it, I thought I’d give you an idea of what you’re in for.  I started my gaming life in the late 1980s, with the Nintendo Entertainment System.  The first three games I ever played were Super Mario Bros., The Legend of Zelda and Final Fantasy.  I currently enjoy playing games on all the current generation consoles as well as the Nintendo DS.  Film and video are my other biggest passion with zombies being a commonly recurring theme on my shelf.  I love all genres of games and even like to sit down with a bad one every once in a while.  Sort of like a bad movie, sometimes a bad game is just as fun.  Now that you know a bit more about me, I’ll let you in on a little secret. 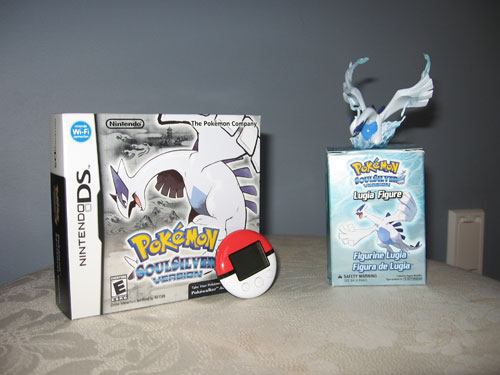 All good games come with toys.

I’ll admit that when going in to pick up my copy of Pokemon Soul Silver this past sunday, I did a quick scan to make sure no one was watching.  This need not be the way however, because while the series does have a kiddie stigma attached to it, there is enough of a reason to love it based on the merits of its gameplay and design.  From the charming character and music design to the deep character collection and battling elements, the Pokemon series is one that I am proud to have stuck with through the years.

The aspects of the series that drew me in to begin with were the charming art design and the music.  It’s intoxicating going through the game and trying to find each of these creatures if for no other reason than being able to say you’ve done so.  Almost even better is the unforgettable tunes that do an exceptional job at conveying the mood of what’s going on.  One song in particular that I’ve always loved is the gym leader theme.  Launching into that battle I could always tell, just from the song that was playing, that I was about to face an incredible foe.

While these things were enough to bring me in, it was the deeply enjoyable gameplay that has kept me coming back.  While on the surface, it looks like a simple turn-based RPG, there are so many other aspects to it that make it not only entertaining, but downright addicting.  The rock-paper-scissors style battles get complex fast and it’s fun figuring out the best combinations and types to pair together, creating the most unstoppable team.  The aspect of collection is another thing that is hard to leave.  Like trading cards (that’s right, I’ve done the trading card thing), getting them all and having the rare one is enthralling.

So, while the series has definitely had its ups and downs (I’m looking at you Pokemon Ruby and Sapphire), if you are an adult that still plays, fear not.  There is still plenty there for you to enjoy and if that’s your thing, then go for it!  There’s at least one Hamsterman out there that’ll be giving you the thumbs up.

Trapped in the Trine