Have you ever wanted to live the Platinum Life?

If hang around on Facebook for long enough, you've probably gotten caught up in playing one of those in-browser games like Mafia Wars, Farmville, or all that other stuff. For me, playing Facebook games isn't exactly the most interesting way I want to spend my time.

I had the opportunity to play Platinum Life, a Facebook game where you become either a DJ, a rapper or singer- male or female.

Your character is your "paper doll" and you start off as an unsigned artist. You eventually becoming signed, then play through to achieve higher and higher record sales until you go gold, then platinum,

The game is basically you rolling the die every time you click "play." Depending on how your stats are, you'll either get positive or negative responses on your performance. 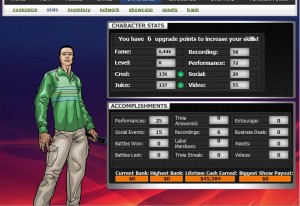 If you have never played an RPG or MMORPG, then welcome to the grind! It's going to take a lot of work to make it up the success ladder.

For me, I may never get back into the grind. I'm not one of the many Facebook users who felt the pressure to play games like Farmville or Mafia Wars, and Platinum Life will not woo me. I think it has mostly to do with how much I actually use Facebook. Platinum Life is for people who spend a grand amount of time in front of a computer screen and have few other options  for entertainment.

When playing an in-browser game, I prefer a basic- yet addictive- flash game over anything too involved. Platinum Life isn't difficult, but it has the potential to become tedious.

188 Seconds With the Sistahs