HomeReviewsMTV's "The Head" Stands Tests of Time
by: kingbabyduck
0
Reviews 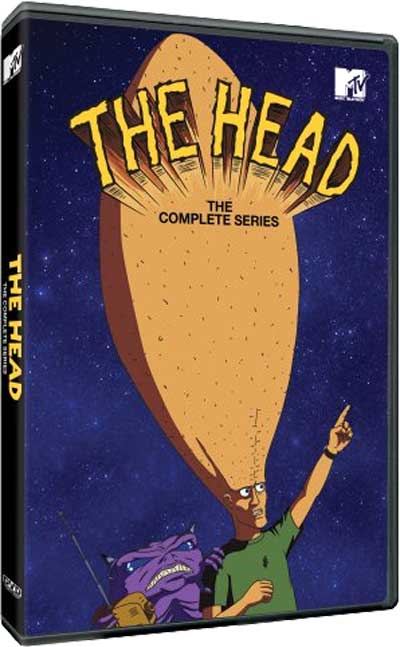 In the 1990s MTV had two well-known things: music videos and kick-ass cartoons. (Okay, three if you count when The Real World was actually good!) In 1994 Music Television hit its animated peak with MTV's Oddities, which showcased two incredibly original series: The Head and The Maxx. Thanks to Amazon's DVD-On Demand service both shows are now available in their entirety exclusively via their website. This week we will focus on the first Oddities cartoon The Head.

Created by Eric Fogel (who would later go on to mold the classic Celebrity Deathmatch) The Head followed the story of Jim, a man with a massive cranium. After a bad visit with head specialist Dr. Axel he runs into a group of vagrants who threaten his life. When all looks doubtful Jim's head opens up to reveal a short, purple alien to save the day. The purple alien reveals his name as Ecapsretuo MorfmI, but tells Jim to call him Roy. After another alien named Gork arrives and takes Jim's girlfriend Madelyn hostage Roy tells Jim that an evil alien race of parasites is setting their sites on Earth, and that the two of them must find five pieces of the Anti-Invasion Machine that smashed to pieces on its way towards the planet. With the help of other human anomalies (i.e.: Ray, the man with a lawnmower blade in his skull; Ivan, who has a mouth on his stomach) Jim & Roy set out to save the world from total annihilation.

When I was a kid I used to wake up at six in the morning to catch this cartoon (along with Danny Antonucci's pre-Ed, Edd n Eddy series The Brothers Grunt), and watching it now brings back a lot of memories. However what I didn't catch back then was how intentionally bad some of the voice-acting was (especially with Dr. Axel), which served as an homage to some of Ed Wood's bad sci-fi B-movies. On top of that the animation wasn't always that great, and it does tend to show its age compared to some of the more recent [adult swim] cartoons. However its humor and writing still is some of the best in American cartoon history, from rival Dr. Lucas Elliot and his closeted fed duo constantly trying to get in Jim & Roy's way (especially Dr. Elliot's child-like temper) to the headhunter segment (which still gets a loud chuckle out of me).

The DVD set contains all 20 episodes of the show (thirteen 11-minute episodes that follow one big storyline and seven 20-minute stand-alone episodes). The first season made viewers tune in each week so they wouldn't feel lost watching the show, whereas the second season gave more leniency to those who lost out in the previous week's episode. Sadly I felt that's what killed the series in the end: without the continuing storyline there was less of a commitment from the viewers to keep on tuning in. And although the second season wasn't as strong as the first one, it still had a lot of great moments. Ones involving Jim accidentally selling his soul for fame and Roy's twin brother Mark visiting Earth shine bright out of the second season, but for the most part it was still an original, entertaining few episodes.

It's a shame there aren't any extras on these discs; even the "Making-Of" episode from the second season was omitted for some odd reason (possibly time constraints). Nevertheless those yearning for the good old days when MTV was all about creative television and not spoiled kids from Jersey will really want to look into The Head. It's originality and strange style still has yet to be matched by even the top animation writers and artists.