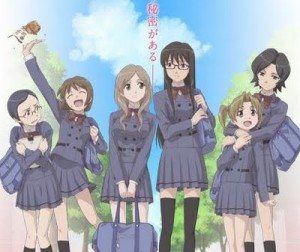 I must've woken up in Bizarro World; that's the only explanation. Here I am watching a Yuri anime comedy that not only isn't perverted, but it contains an actual plot?! AND IT'S GOOD?! Yes, boys and girls, miracles can happen, and 2009's Sasameki Koto is surely one of them.

Based on the manga series by Takashi Ikeda Sasameki Koto (translated as "Whispered Words") follows two childhood friends: Sumika and Ushio. Sumika is in love with Ushio, but can't figure out how to properly tell her. It also doesn't help that Ushio only likes "cute girls," whereas Sumika is tall and athletic. During their stay in high school they come across another lesbian couple (Tomoe and Miyako) and the cross-dressing Masaki, who only does it to catch the attention of Sumika (whom he has a huge crush on), but is blackmailed into doing modelling under the alias of Akemi after his sister discovers. Ushio sees the photos, and quickly falls in love with the man in girl's clothing. So to recap: Sumika loves Ushio, Ushio loves Akemi (who is really Masaki) and Masaki loves Sumika. I'd make a Zero Punctuation-like chart for you, but I can't draw to save my life.

I have so far watched nine out of the thirteen episodes, and I will admit that the show starts off slow. The opener where Ushio falls for a second-year student is the weakest episode in the series, but I will give it credit for pulling off some some dramatic elements to the show. Episodes dealing with Sumika and Ushio's first kisses and "forbidden love" have been done before in many other series, but here we see it with a more touching element to it (and I will have to admit the scene after the end credits in the first kiss one made me fall out of my chair laughing). One complaint I do have with the series is the character Azusa, the yuri fanatic. I wouldn't say that she's a bad character, but she shares too much of the same appearance and attitude as Akane from Kanokon. If you want proof, just look below: 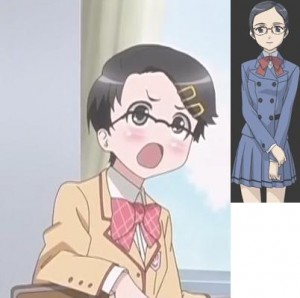 Can you spot the difference? Well neither can I! However I can easily overlook this similarity for two reasons; the first being that there are a lot of anime series that feature characters that are similar to Azusa. The other reason is that of what happens in Episode Nine of the series. It deals with Azusa writing her own Yuri novel, and at first it seems like another comedic episode with an epic punchline waiting to happen. Instead, however, you're brought into this girl's world and seeing how lonely she is. (Don't worry, it has a happy ending.) It shows how to properly evolve a two-dimensional character without going an unrealistic route.

As a whole Sasameki Koto works in many ways, and can in fact be used as a teaching tool of sorts for those that don't yet have a concept of love within the GLBT community. Also as a friend to those that are gay, lesbian, bisexual or any of the other demographics I can say with all my mind and heart that Sasameki Koto does same-sex love justice. It's sweet, funny, touching and above-all just plain good and down-to-earth. Granted it may be a bit predictable, but a lot of romantic comedies are like that.

Sasameki Koto earns itself an A. Those that are curious to watch it can view it on the show's Crunchyroll page.