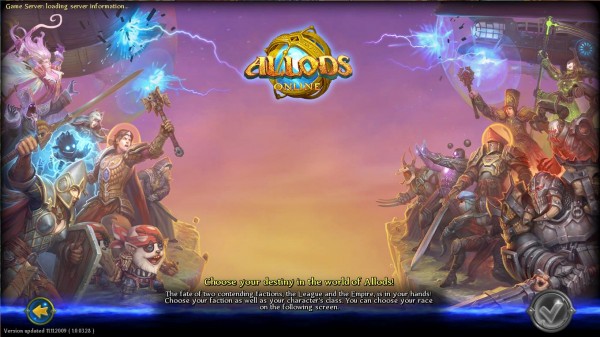 If you're looking for a free MMORPG that still give you the feeling of playing the top dog at the moment, World of Warcraft, then you've got to give Allods Online a try.

Allods Online is a 3D Fantasy (elves, orcs, etc.) MMORPG with some interesting Sci-Fi elements, but with a much greater emphasis on fantasy. A planet called Sarnout was destroyed which led to the formation of floating islands in space called Allods. The game feels like WoW and plays like WoW. I was surprised as to how polished this game is. One of the reasons why it's a joy to play is because almost every detail of it copied from WoW and that's not a bad thing.

For example, the character creation resembles World of Warcraft, giving you two factions to choose from; either The League or The Empire (Alliance and Horde respectively). Next, you select a race from one of six types; Elves, Gibberlings and a human variation called Kanians for The League, and Orcs, Arisen and another human variation called Xadaganians for The Empire. Once your race is chosen, you can pick one of the eight available classes which are very similar to WoW, but with a little variation. You can choose from a Warrior, Paladin, Scout, Healer, Warden, Mage, Summoner or Psionicist. Certain classes are specific to particular races, and depending on the race you select, your archetype changes completely. For example, if you were to choose to be an Arisen Healer, your class would be Heretic, whereas if you were to choose an Xadaganian Healer, you would be a Inquisitor. Each archetype has its own flavor and style as far as aesthetics and a passive ability which is a great addition to Allods. 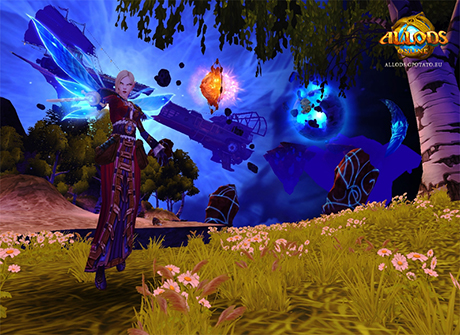 Now that your character is created, you’ll begin playing through an instanced story-line tutorial (similar to Lord of the Rings Online) that is unique to each faction. The League takes you through the destruction of their home city as you escape; and The Empire starts you on a flying airship in the midst of battle. If you're familiar with WoW's interface, gameplay mechanics, spells, professions, hotkeys, quest markers and style, as well as the equipment screen, then all of the aforementioned will be familiar to you from the jump.

Allods Online isn't just your cookie-cutter mmo. It introduces a few new elements. The first being fatigue,which puts an twists on WoW's popular ‘rest’ system. The longer a person spends playing and completing quests, the more fatigue they can accumulate. Fatigue gains at a 1:1 ratio with regular experience. So if killing a mob rewards 50 EXP, you'll also get 50 Fatigue. Fatigue accumulated can be exchanged at an Innkeeper for additional experience up to a certain amount each day, which essentially creates a soft ‘cap’ on experience each day. You can continue playing and leveling even after hitting the daily cap on fatigue, but EXP will be gained at 50% of the normal rate because they won’t be able to exchange fatigue for EXP.

Allods also brings a new dynamic with the death system. When you die you’ll automatically be taken to Purgatory, and required to wait there to be resurrected. There are penalties applied at later levels, sort of like WoW, but minus the corpse run. You just respawn at the nearest resurrection point. At first look, the talent system seems identical to WoW, but with a little more detail. Every time you level up, you receive a point, which can then be used to purchase a new skill or upgrade a current one. Also like WoW, progression through the talent tree is dependent on set point goals. Leveling in Allods is SLOW. It took me about 5 hours of consistent playing to reach level 8, but I really didn't mind because there are so many quests to complete which alleviates the "grinding" aspect popular to most Korean MMO's. Also, quest locations and turn-in points are marked on your map, which is also something I love.

I'm not big on PVP, but for the sake of a well-rounded review, I gave it a try. Some areas of the world are always open to PVP. So enter the zone at your own risk. Others sections require you to ‘flag’ yourself (much like WoW), effectively saying that you’d like to PvP. However, in the sections where you are required to flag to PvP, players who are flagged earn 110% experience from enemies, whereas those players who do not, only earn 90%. Also, Allods has an Airship PvP system, which puts you in control of an flying ship doing air battles and boarding an enemy player's ship to fight them, with loot from the ship's hold being available to you if you win. I've yet to experience the Airship battles because I'm not high enough in level, but I'm looking forward to giving it a go. There's also arena based PvP for those interested in that.

Overall, Allods Online is an extremely impressive free-to-play MMO. Despite the occasionally lag issues and interface glitches, it’s a very enjoyable MMO that I'm having trouble walking away from because of it's amazing visuals, impressive gameplay, and barrage of quests. This is hands down the best free to play MMO out there, in my opinion, and definitely worth a download for those looking for something new, but still familiar.