Razer is sending out a challenge to anyone who dares to call themselves a professional DotA team. They are hosting what claims to be the largest DotA tournament in the history of the game, and with spots enough for 1,024 teams (that’s 5,120 players), that claim may stand. The prize pool of $30,000 dollars is going to be spread among the top 64 teams in the tournament but only the top 4 will receive the prize of 5 Razer Carcharias headsets each.

I don’t claim to be a Defense of the Ancients expert. The few times I’ve played the game I’ve been beaten into the ground, so I don’t make it a regular pastime. This tournament will really bring the players out of the woodwork though. The tournament will be online and run over the course of a 3-month-long period. Registration begins on May 10, 2010 at 20:00 CET, and will accept applicants from all over the world. 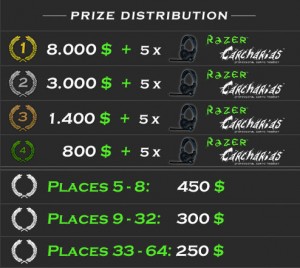 More information can be found at their Facebook page here, at razer’s own site here, at the main DotA site here, and at the DotA League site here.

This won’t be the first time Razer has sponsored a full-on DotA tournament (read more here). That means they’re used to this sort of thing, and should mean that this tournament will set the standard for further tournaments worldwide. To borrow from Razer’s slogan: This will be a tournament for gamers by gamers.

Product Review: Hands On With Inca...