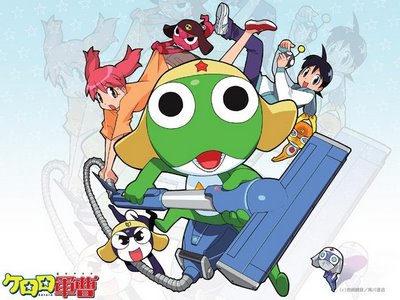 It takes a lot of hard work to make an English dub that's as good as the original source, and it's even more difficult to make one that surpasses the Japanese version. The English dub writers of Sgt. Frog, however, managed to make it look easy as pie.

The series doesn't have that much of a concrete plotline, but it goes as followed: Sergeant Keroro and his Advance Recon Mission Preparatory Invasion Terror Platoon (A.R.M.P.I.T.) are sent down to Earth (or Pekopon, as the amphibious aliens like to call it) in order to destroy it. Unfortunately Sergeant Keroro would rather spend his time making Gundam models, watching TV and eating cookies under the Hinata family's house. His comrades Tamama (the cute schizophrenic), Giroro (the trigger-happy mean mofo), Kululu (the mad genius who takes pleasure in causing Keroro pain) and Dororo (the master of speed, stealth and flowers) all continue to follow his orders, despite Keroro being a total dumbass.

Sgt. Frog is currently one of Japan's most popular series, but it took it awhile to finally come to the States due to licensing issues. (ADV Films originally had the rights, but lost them to FUNimation after they had expired.) Near the end of 2008 FUNimation had put up a test dub for fans to review. (Most was positive, but some criticized the Americanized name changes.) After a couple cast changes and deciding to change the names back to the Japanese version Sgt. Frog was finally released in America. We were not prepared for the brilliance that was about to unfold.

Taking the Shin-chan route the writers rewrote some of the pop culture references for more Americans to understand; on top of that they managed to do that without taking away any of the context from the original source. (Yes, that is human character Fuyuki making a Charles Manson reference in Episode 2, a hilarious one, in fact.) We also get another fourth-wall-breaking Narrator (played by R. Bruce Elliot) who commentates rather than help tell the story. Not to mention the rest of the English dub cast bring out stellar performances that would make the casts of The Simpsons and Family Guy jealous (especially from Brina Palencia, whose portrayal of Tamama is nothing short of fantastic).

When it comes to the actual episode plot-lines Sgt. Frog can be hit-or-miss (mostly hit, though). When the show tries its best to have a serious moment (like in Episode 5 where Keroro finds out the toy shop owner has to shut down his store due to poor business) it sometimes doesn't work well. Fortunately serious moments don't usually happen, and when it gets funny -- believe me -- it gets funny. Storylines involving swim racing, Giroro losing his beloved belt, Tamama taking over the Platoon and dubbing himself Comrade Führer and Keroro's failed attempt at doing a radio show are truly memorable, but there isn't a single episode where you won't find yourself laughing hysterically. (In fact you'll find yourself wondering why this isn't airing on Fox or Comedy Central with their top-notched animated series.)

Currently the first 39 episodes of Sgt. Frog are available to view on the FUNimation video site, and the first two seasons (split into four DVD 2-packs) are in stores now. No word yet on if FUNimation will be releases future seasons, but judging by the quality of their work it'd be a crime if they didn't.