It's Monday morning and I'm in LA to cover what may be the most new-product-announcing Electronic Entertainment Expo (E3) event in years. 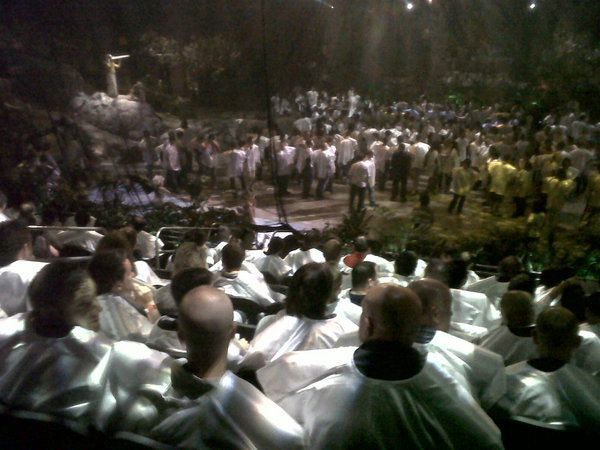 Microsoft showed off Natal I mean Kinect last night at their pre-press conference event last night with help from Cirque du Soleil and all I can say is "spaceponcho FTW!" Most of the games they showed off for the new hardware/software bundle are title types that we have already seen on the Wii - many of which were not very successful on that platform by the way - and a few that are unique to the Kinect experience. It will be interesting to actually see in person (if that happens for me this year - as I got the bums rush at the Microsoft booth last year) how Kinect really works and if spaceponcho is required or just value added!

The next big thing that has been blowing up my inbox this morning has been RockBand 3. If you listen to the podcast on a regular basis or visit this site more than once a week you know I am a RB FREAK! I had already decided to purchase RB 3 regardless of what new features they announced (gotta support you local homeboys) but the latest out of camp Harmonix should have everyone excited. Sure there is new music and more of it - artists like Queen, The Doors, The Cure and Them Crooked Vultures make the list - but it is the peripherals and new gameplay modes that I think will draw the biggest attention.

The Strings the Thing 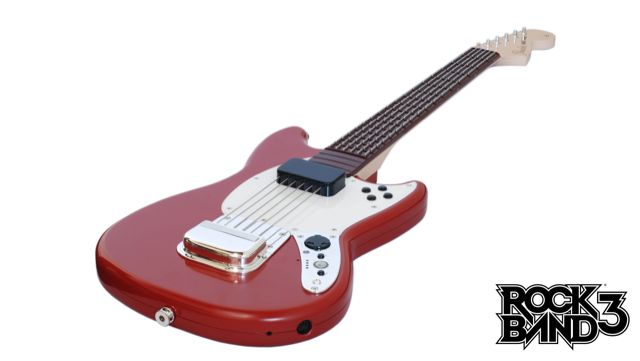 The new RockBand guitar is a Squire Stratocaster. It has six (6) strings (yes, you read that right STRINGS) and features full button control on the fretboard. MadCatz has also partnered with Harmonix to create additional licensed peripherals and have announced their "Mustang" string-ed guitar which I have yet to see any pictures of.

Also announced were pro modes of gameplay which would allow the player to play songs more along the lines of how they are played for real on real instruments. Chords, REAL chords people! At least for the guitar and bass, on the drum side the pro mode of gameplay will support 3 cymbal setups with proper distinction between hi-hat, toms, etc. So all the folks currently mopping the floor with us mere mortals on expert will get to show just how truly expert they are with the new pro modes. Personally, I think these new modes will allow more actual musicians to play the game with their non-musician friends on a level playing field and maybe even inspire a few of the non-musician types to pick up an instrument.

One thing is for sure, the Harmonix group isn't looking back. In a move made to more than likely bridge the gap between gameplay and learning-to-play the new peripherals and gameplay modes make it clear that Harmonix - succeed or fail - is looking to move rhythm-based gameplay from toy to truth.

Personally, I'm crazy excited to see what is going to happen next. Stay Tuned! And don't forget to check out www.electricsistahood.com/live/ for all of the event coverage we can offer live straight to you!