HomeEventsE3E3: The Game That's Not A Lie
by: ninjasistah
0
E3 / Events 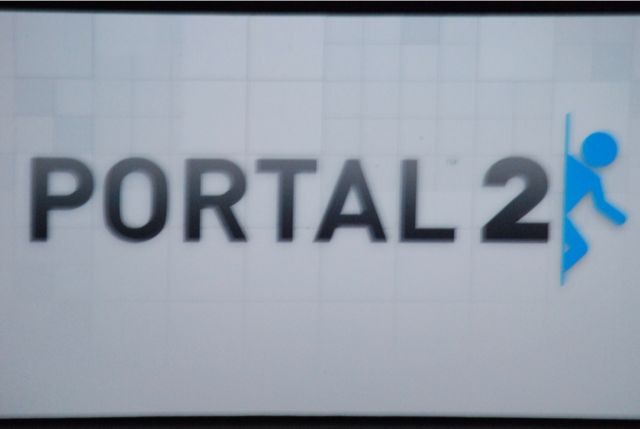 Day two of E3 is done and there is only one more day of gaming goodness to go, but I started my day off the right way with a visit to Valve where I was treated to a glimpse of what Portal 2 will look like.

Though the preview was short it made a lasting impression and left me repeating the words "oh f*ck" over and over again to myself as I headed out of the West Hall meeting room.

The original Portal game was bundled into a special Half-Life 2 package (The Orange Box) that also included the Team Fortress 2 game and while many people purchased the pack to play Team Fortress 2 I bought it for Portal. Portal was (and I think the argument can still be made that it is) one of those games where the moment you beat the end boss and complete the game you really feel like you have accomplished something major. When I finally killed GLaDoS I literally jumped for joy and informed my Xbox 360 that I had successfully, "made it my bitch!" The original Portal was a strategic and brain-numbing first-person-perspective puzzler that forced the player to use damn near every brain cell they had available to move from room to room in hopes of escaping the Aperture Science Lab. By using two portal guns (one that creates an entry point and one that creates an exit point) the player must work their way out of a bad situation while GLaDoS offers her, um, assistance and the promise of cake. As you progress you learn the cake is a lie, but the crafty experience is not. Valve (the creators of the game) did a great job of crafting a action-puzzle experience that did not coddle the weak and left the player hungry for more, and that "more" is now on the horizon.

Teased before E3 2010 with an announcement event &mash that was then cancelled by Aperture Science &mash Valve officially announced Portal 2 at the Sony media briefing earlier this week. The teaser trailer alone drew excited "oooh's," and "hell yeah's," from the audience in the Shrine Auditorium and those that have been treated to the same first look experience I had on Wednesday left in need of a towel.

Portal 2 Is not just more of the same game mechanic that made the original Portal great but a fully formed puzzler that introduces a bunch of new traps techniques to propel the character forward to (I imagine) battle GLaDoS again. Joined by a new companion named Wheatley, a British-sounding drone that has been trapped in the lab longer than you who desperately wants to escape, joins you on the journey helping you access hidden panels and ideas for solving some puzzles along the way. Wheatley is a fantastic source of comic relief and if I end up having to sacrifice him like the companion cube in the first game, then I will be very sad.

It was obvious after viewing the short preview that this new game is not just an expanded version of the first Portal game, but a well thought-out new Aperture Science lab experience. I'm looking forward to it, unfortunately I'll have to wait until sometime in 2011 to wet my Wheatley whistle.