E3: Good Can Come of Rage

One fine evening, Fallout 3 decided to go out for a drink.  So, it found a bar and started ordering some drinks.  After some time, a nice game called Borderlands came up and started ordering drinks for Fallout 3.  The next morning the two awoke next to each other with confused looks on their faces.  That is the story of how the newest gem from our good friends at Bethesda and Id entitled Rage was conceived. 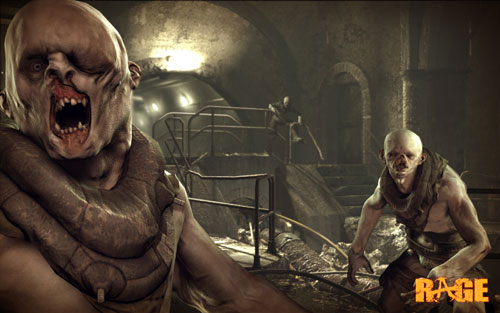 Bethesda’s booth at E3 was one of the most secretive of the whole lot.  You could tell that there was a whole lot of stuff going on in there, but only with an invitation could you experience the awesome games that lurked inside.  While there were many games available to experience in that booth, I’m going to be focusing on one in particular today.  Rage has been in production for a good long while, but believe me when I say that this is definitely a good thing because it shows.  With the incredibly smooth 60 fps that Id Tech 5 gives, it not only looks and runs great, but the rest of it is coming together quite nicely as well.

Before I go into all the stuff that I just loved about the demo I got to see, I will get this out of the way.  Yes, the story for Rage is almost to the point of hilariously similar to another game published by the same company.  An asteroid is heading towards the Earth threatening to destroy all life on the planet, so pods are created, filled with people and drilled underground to emerge when it is safe.  You play as someone freshly emerging from the pod into the Wasteland, where the world is now filled with mutants and bandits.  While this story does seem like some kind of hybrid between Fallout 3 and Borderlands, Id promises that we will be treated to a very deep and rich story.  While I have not yet gotten tired of the whole post-apocalyptic wasteland story, from what I have seen, it looks as though they are definitely not kidding.

One thing that really bugs me is when you walk through a crowd in a town and you are greeted by a bunch of slightly different clones.  So, as we walked through the town in the demo, I looked very hard at all the NPCs we walked by.  Not only did all of them look different, but everyone also looked interesting.  This is something that is very difficult to pull off and I applaud Id for making the effort.  The enemy characters are a completely different story. 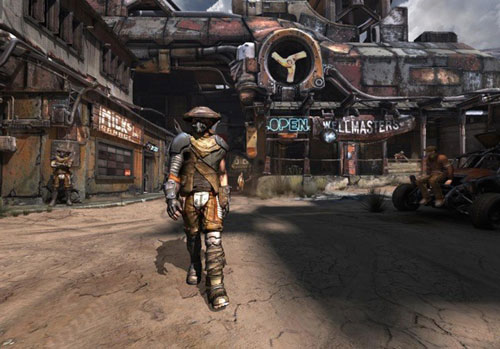 While they do have some clones coming at you, it’s easy to understand since they’re throwing bunches and bunches of them at you.  What they did to remedy this, is each band of baddies has their own style.  I’m not just saying that one of them wears socks with sandals and another likes their jeans pre-ripped either.  Each enemy faction will approach you a different way in the way that they attack, surround and even simply traverse the terrain.  This dynamic enemy traversal really makes each enemy faction seem like a completely new experience.  While one group might be right up in your face attacking you head on, another sneakily surrounds you and swings around on the nearby pipes.

Another thing they focused on was that it was a big deal that the environments are just as important to develop as characters.  This shined through quite clearly from their presentation.  While the colors are definitely your familiar apocalypse browns, each environment was quite different from the last.

As far as the gameplay goes, it doesn’t look like there be too much ground-breaking going on here, but that doesn’t mean it won’t be a ton of fun.  A combination of first-person shooting and driving action is the dominant portion of the game.  The driving seems to evoke a little bit of Borderlands and maybe a smidgeon of Motorstorm.  It looks like they will be giving you plenty of reasons to drive around with the nice environments and baddies to blow up along the way.  When out of your vehicle, you’ll have your guns to protect you, but sometimes a little more doesn’t hurt.  One device they showed as a part of your arsenal was a remote controlled car with an explosive strapped to it.  This adds even more variance in the way that you can be either as stealthy or up-front as you want to be about how you want to combat your enemies. 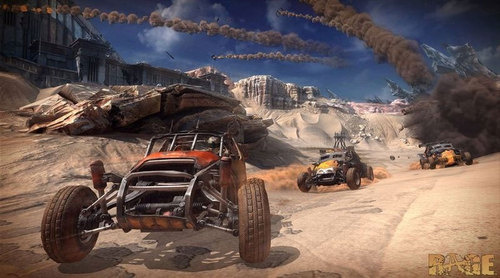 Honestly, I could go on and on about how excited about I am about Rage.  With the amount a variance they’ve stuck in here, it seems like there will be plenty to experience and it won’t go stale any time soon.  This is one game I won’t be able to rage-quit!