Earlier this year, Quantic Dream graced us with the presence of a game I would call one of my favorites of the year so far.  Heavy Rain is one of those games I keep wishing I could go back in time and experience for the first time again.  The story is top notch and the controls bordered on revolutionary.  Recently, they released a free update to include support for Sony’s Seal-Nosed Mote.  I’ve gotten a chance to give it a go and I can definitely say I’ve rendered an opinion on the subject.  Do the new controls add something to the gameplay, or was it just an unnecessary add-on to promote our favorite multi-colored accessory? 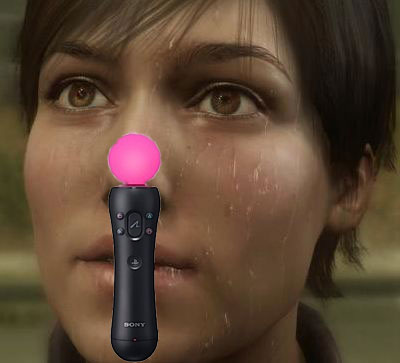 I absolutely loved the original control scheme for Heavy Rain.  It added a sense of depth and immersion not seen in a lot of other games to be able to mimic the actions on-screen with either a sixaxis movement or an analog stick twist.  With the new motion controls added in with the latest update, while some give an even better sense of immersion, it’s really hit or miss.  At one point you’re knocking on a door by making a knocking motion with the seal-nose and the next you’re cursing at the TV because it said you failed to swing the mote diagonal enough for the game to not recognize it as sideways.

On the plus side of things, there is a lot of fun to be had with the motions that it has you do.  In the beginning of the game, it has you brush you teeth and shave.  With the new controls you get to make the exact motions you are seeing onscreen in order to complete the tasks.  Drawing up the plans for the house in the opening scenes was a blast too, as it had you swipe the controller as though you were drawing the lines on the paper or wiggle it back and forth as though you were erasing.  I don’t want to give too many more specific examples so as to not give away anything, but there are also some other very specific scenes that are made much more visceral by the new controls.

All that being said, some of the movements are not quite as intuitive or easily performed as they are on the controller.  There are different orientations they want you to have the controller in, standing upright or pointing at the screen for example, and switching between them during the high-action scenes can be disorienting.  I had several failed events because I have to go from pointing stance to standing upright stance and I only had about one second to process that.  This can make the game much less forgiving and a little more frustrating.

While I do prefer Heavy Rain’s original controls, I don’t think they should ignored either.  If you are looking for something equivalent to a very hard mode for the game, I would suggest trying it with the seal-nose on hard difficulty.  If you are playing it for the first time, I would suggest playing it through with the original control scheme so you can have the best experience possible while experiencing this awesome game.  If you haven’t gotten to play it yet, then go find it.  Seriously, do that right now.  If you’re reading this then you have not gotten up to get Heavy Rain.  Stop reading and go!

The only thing better than killing...