It seems as though a lot of games nowadays are throwing multiplayer into the mix.  Possibly even more surprising is how successful it is when they do so.  Uncharted 2, earlier this year, took their gaming formula and added an incredibly fun multiplayer experience.  Bioshock 2 also took the multiplayer plunge and added bought plasmids to the PvP first-person arena.  Early next year, when Dead Space 2 launches, it will be the next game to take it’s awesome gameplay and pit friends against friends as they strategically dismember each other for enjoyment. 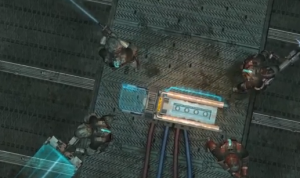 The biggest question that is asked when a multiplayer mode is added to a game that was traditionally a single-player experience is: was that really necessary?  In my opinion, with Dead Space 2, it isn’t totally necessary, but it looks like it’s going ridiculously fun. The premise for the mode is that there are two teams, a team of humans and a team of necromorphs.  There will be five different stages shipping with the game involving the humans accomplishing a goal and the necromorphs stopping them at all costs.

As a human, you will control much like our good friend Isaac Clarke.  With plasma cutter and line gun in hand, you’ll cut down the beasts that are trying to stop you using the series’ signature strategic dismemberment system.  As a necromorph, you’ll leap upon the mining-suit-wearing heroes and slice or gobble them down before they can accomplish their task.  There will be several different types of necromorph that you can choose from as well.  You can be the Pack, the Lurker, the Spitter or the Puker on your quest to take down your friends.

There are several things that excite me about this new multiplayer addition.  First off, it looks like it emulates the actual gameplay in the real game while adding the component of playing with and against friends.  If this manages to be pulled off in a meaningful way, then it could greatly extend the life of the game.  The idea of being able to be the enemy, though not an entirely unexplored concept, is very exciting to me.  Drudging through the halls of the Ishimura from the first game, I remember the sense of dread I felt at where the next attack might come.  It’ll be awesome to get to experience the other side of that through the necromorphs.

Taking cues from even more games, there will also be a leveling system in the game that will add skins, weapons and more abilities to your different necromorph characters.  While certainly none of this is anything new, I think that they’ve done a fantastic job at looking at what has worked for multiplayer games thus far.  More importantly, they looked at what would be fun and make sense for the type of gameplay and atmosphere this series is all about.

I very much like that although they could have gone with a fairly simple capture the flag and team deathmatch type of multiplayer, they chose to keep it within the tone and feel of the game.  While the single player affair was more than I needed to enjoy this game, I am delighted and excited to hear about this addition.  Is it January 2011 yet?