After being in development for well over three years SEGA and Platinum Games have finally announced a release date for their video game Vanquish for the PS3 and Xbox 360: October 19. This week a demo was released, showcasing a prequel to what's to come in this upcoming title. I came out of this demo with many high hopes, but not without a couple concerns.

In the demo players take control of Sam Gideon, a government agent suited in battle gear to help the US defeat the Russians, who have captured a space station to use its energy to destroy various American landmarks. (You can add your own Cold War joke here.) During the Vanquish demo you take down enemy soldiers and the robots they control, leading up to a massive boss battle involving a giant robot with a weakspot or two. I won't lie and say that the boss battle here will probably take you a long while to accomplish, and you will probably die a few times before you figure out how to complete the level. This is why I believe that having a good strategy -- as well as a strong trial-and-error process -- will play an important key role in Vanquish during the long run.

Playing the Vanquish demo was similar in vein to many of the recent third-person shooters, including Gears of War and Monday Night Combat. You aim, shoot and sometimes chuck grenades at the opposing forces. If you are seriously injured during the fight the game slows down to a nice bullet-time mode, where while you search for cover to heal you can return enemy fire and still manage to dodge theirs. (At first I was confused as to what was going on when this first happened, and was thinking Gideon was near-death.) In regards to the boss battle players will have to weaken the robot in order for it to expose its soft spot. It's a tough battle, but fortunately if you do wind up dying you'll just start from the beginning of the battle, and not the start of the level.

Graphics in the game are gorgeous, and is perhaps the best-looking game SEGA has put out. On top of that the music and sound in the demo definitely knows how to set the mood and atmosphere in what's to be expected from the full game. The quality of its appearance and sound are nearly on-par with some of the CGI effects in the most recent of blockbuster films (especially the boss bot at the end, who looks like he could've just trampled on-set from the Transformers movies). 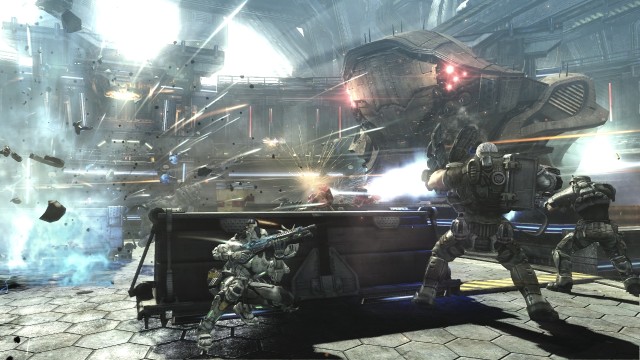 I had issue from time-to-time with the control scheme for the Vanquish demo, however, which may make it a tough sell in the long-run. Switching weapons is tricky (using the regular D-Pad on the PS3 version), and why they didn't put the grenade-throwing maneuver on L1 instead of the current Triangle-button is beyond me. (If shooting your gun is R1, it should have been a no-brainer to put grenade-throwing on the opposite side.) I do have to give credit with the aiming system, which helps to easily point out your enemies and fire when ready. Granted you'll have to do a little searching around to scope out for enemies, but once you find one of them killing them is literally as easy as a simple push of a button.

All together the demo for Vanquish has left me very optimistic about this game. If the rest of the game is anything like this demo then we can expect a mighty fine title in the end. Let's just hope they fix the control scheme near the end, or make it so you can do custom controls. I'd hate to waste perfectly good ammo because of where a certain button is placed.

Yakuza Ready to Punch You in the F...