Another Kingdom Hearts that isn’t 3? Well… all right…

But the next one better be 3 damnit! This newest iteration of the series is a remake of a cellphone game named Kingdom Hearts: Coded. It was only released in Japan, but now with the remake on the DS North America will be able to experience the story of this installment of the series. 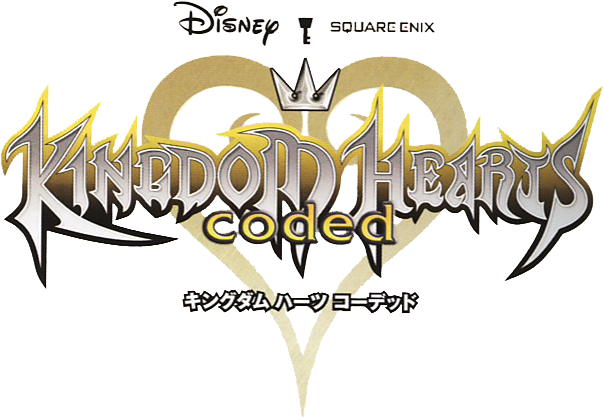 Set after the events of Kingdom Hearts II, the story revolves around a journal entry that Jiminy Cricket finds in his journal. The thing is, he didn’t write it. King Mickey orders the journal digitized and enters the digital world to find out more about this entry. While in this world, Mickey encounters a digital Sora, who the player will take control of. Digital Sora has to fight many “bugs” that look like red and black heartless on his journey to investigate the identity of “them” and to live out the contents of the journal so the truth can be unveiled.

• The future of the KINGDOM HEARTS series arrives on Nintendo DS: From world-renowned creator and character designer Tetsuya Nomura comes the latest installment in the beloved KINGDOM HEARTS series. Sora, Mickey, Donald, Goofy and a host of familiar faces from KINGDOM HEARTS and FINAL FANTASY unite once again for an exciting new adventure.

• An assortment of diverse and entertaining boss battles: Guide Sora like never before through boss battles inspired by side-scrolling, shooting and classic FINAL FANTASY games.

• Endless possibilities in the Avatar Menu: Players can design their own avatar using over 800 unlockable parts and trade playable maps with friends.

What really catches my eye about this game is the description of the boss battles. Apparently they range from classic KH style to side-scrolling battles to shooters. Too many games today are making boss battles feel too similar in the way they are fought, so if this game truly provides many different types of battles I welcome it to my DS library.

This growth system sounds very intriguing and it should make multiple playthroughs a lot of fun. The avatar system sounds like a little extra feature that won’t matter much, but 800 unlockable parts makes me wonder exactly what it will entail. Finally, the tradable maps that can be played and earn you items and avatar parts will add to the social aspect of the game. Using the DS’s Tag Mode to trade maps while you aren’t playing means that if you to a large gaming event there’s a good chance you could walk away with a lot of extra game time in the form of new maps.

I don’t know if these screens are from the original cellphone version of the game or the DS remake, but I am hoping they are not the remake. The DS is capable of graphics much better than what I see here. I’m looking forward to this game, but like I said before I am anxiously awaiting an announcement for Kingdom Hearts 3. These prequels and side stories on the mobile platforms are fun, but I want another epic adventure featuring Sora (the real one, not a digital version) and friends kicking heartless ass.

Major League Gaming: At the Event

The Rabbids Are Invading Your Airw...