HomeVideo GamesYou’re a Liar and a Cheat and I Love You
by: Bramimond
0
Video Games

You’re a Liar and a Cheat and I Love You

Red Dead Redemption recently got another DLC pack that expands the multiplayer experience even further. Hunting grounds, new gang hideouts, races, multiplayer poker and liar’s dice, and a new game mode. What more could a gamer ask for? Well a fix for the connection issues that I am still having, but that is beside the point, let’s take a look at this DLC. 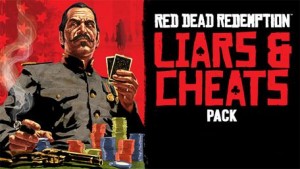 The first thing I did after downloading the Liars and Cheats pack was head toward the nearest hunting ground to see what it would be like. It was just my luck that this was the cougar hunting ground. After a few excruciating maulings from the animal I now fear more than most mythical creatures, I got a great laugh when I saw the name of the boss of the cougars: Demi, the legendary cougar. The other three hunting grounds are similar in that they pit the player against waves of wild animals before a boss monster appears. The real fun is playing these levels with a posse, as the bodies will fly on both sides and it becomes a hectic battle of survival of the fittest. The seven new gang hideouts, in addition to the hunting grounds, add a lot of life to the free roam experience.

Though the new gang hideouts are short, they bring more life to the map. Now a gang hideout run takes a lot longer and has much more variety. Many of the hideouts play differently as well. For example, one of the new hideouts is an all out brawl out in the open where most of the enemies are toting shotguns; another has you defending a house from a few waves of enemies. Not to mention, that all of the new hideouts give you access to the explosive rifle upon victory. It comes with five shots and doesn’t gain ammo when you go over an ammo box. This new weapon is a lot of fun, despite not fitting in at all with the old west feel of the game. Rather than firing a slow projectile like most explosive weapons, it is better to think of the gun as making an explosion at the spot you are aiming when you pull the trigger. It makes enemies taking over into a cloud of blood in no time flat.

I feel the next two features, multiplayer gambling and horse races, should have been in the game right from the start. At the very least, they don’t warrant a ten dollar purchase by themselves, but they are a fun distraction. Poker’s fun factor truly depends on your opponent(s). I played one game where the only other person at the table either folded or went in on every single hand. Two games later and I’m in a nice long game where all the players are playing fairly smart. Just like the game itself, finding a good game in poker is in the luck of the draw. Liar’s dice is a little more fun, if only because it is a more rare game, poker is everywhere, but this is one of the only video games that allows me to play liar’s dice.

The horse races are a fun way to spend some time. They start just like you’d expect them to, but then after about ten seconds or so weapons become live. This means that each player can now use their shotgun, revolver, and even their knife to try and take other players out of the race. This means that slower players can still win races with tactical kills. After being shot down, a player will respawn, but the death gives a large disadvantage. Ammo does not replenish after a respawn however, so conservation is key.

The new game mode, Stronghold, adds a little more variety to the competitive scene. Stronghold is an objective based attack and defend playlist. Two teams of players take turns defending and attempting to take a series of points on the map. The attacking team is given a certain amount of lives and a timer, if either of these runs out, the defenders win. The overall winning team is decided by either who has captured the most points, or who has captured their points in the least time. The different maps give a lot of variety. Fort Mercer is a large map with plenty of gun emplacements, cannons, and different types of terrain. Whereas Escalera is a smaller map where enemies are around every corner, and the battle is much more fast paced. The larger maps have better weapon sets for both teams to make up for the distance that is generally between you and your opponents. Smaller maps like Escalera only allow for less powerful guns for the short range combat. In either case however, the attacking team is given better weaponry (namely dynamite) to make up for the field advantage and unlimited lives of the defending team.

All in all, no matter what part of the Red Dead Redemption multiplayer you enjoy, this pack has something for you. A lot is added to the free roam co-op experience, and the competitive gameplay gets a nice boost as well. Not to mention that this pack also allows players to play as single player character skins (look for me as Irish). While a few of the features should have been in the game from the start, this pack adds enough to be worth the ten dollar price tag for most gamers. I bought it, and I can’t wait to play some more stronghold and go clear out some more gang hideouts with my fellow cowboys/girls.