Such A Delightful Little "Squid Girl" 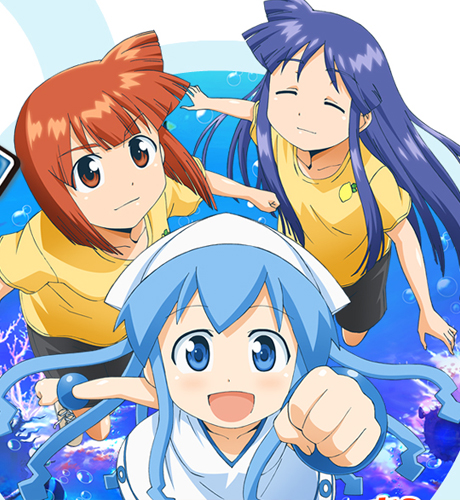 With a name like Squid Girl many anime fans' thoughts would turn to the dark side. A girl with many tentacles? It's time to get your mind out of the gutter, for this show isn't the least bit dirty; in fact this new comedy is perhaps this year's most charming anime.

Squid Girl (better known in Japan as Shinryaku! Ika Musume) follows the Ika Musume, a human-looking cephalopod as she tries to enslave the world, mainly because of the people who pollute her home. Once on shore she meets restaurant manager Eiko Aizawa, who doesn't see Ika as a threat in any way. After an incident involving the squid girl smashing a hole in the restaurant's wall Eiko orders Ika to work for her to pay for the damages. Later Eiko's little brother Takeru bonds with Ika, while the eldest sister Chizuru strikes fear into the title character's heart. With misadventures abroad Ika will have her tentacles full trying to adapt to Earth's ways, let alone try to conquer our little green planet.

While Squid Girl is quite formulaic it has enough humor to make itself stand out from other anime comedies. Yes there have been shows with sea creatures trying to adapt to land (Seto no Hanayome and Mermaid Melody, to name a couple), but here we have a more adorable take on the subject. The squid girl who wants to rule the world can't even kill a mosquito without having to resort to her full strength (ending in disastrous results), is scared of floatation devices shaped as killer whales and sharks (her biggest predators), and grossly spits out her black ink to use as a special spaghetti topping (not sure what the world of culinary arts has to say about that). It's about presentation, and in Squid Girl the humor is showcased in a very fine manner. 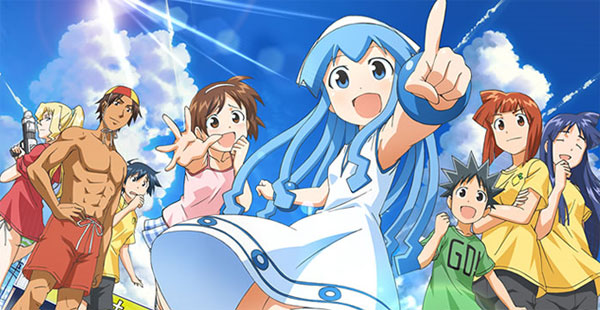 The visual humor is also laugh-out-loud funny. Watching Ika almost light her tentacles on fire with sparklers is ridiculously silly, and her facial expressions to the most mundane things that shock her will even get a chuckle out of the most humorless of men. Of course there is a bit of a sour note that appear in Squid Girl. The way Ika manages to use "squid" in every sentence she utters ("I can't squidding believe it," "Go squid yourself," "Whatcha squiddin' about, Willis?") gets annoying...fast.The puns fall A-cup flat, and it's a shame because it sometimes will ruin a good gag. You'll wind up groaning more than snickering when Ika throws a "squid" into a sentence for no apparent reason.

Nevertheless Squid Girl is definitely one of this year's more heartwarming series. Sure the lessons may be a bit corny, but in the end the silliness of this anime outshines the dry puns. Give the show a try on Crunchyroll, and see why Squid Girl is one adorably funny anime to look out for.