HomeReviewsTelltale Sends Us Back Again
by: Hamsterman2049
0
Reviews / Video Games

In late December of 2010, when I played part one of Back to the Future: The Game, I had a lot of fun with it as a huge fan of the film series.  Seeing the second episode begin to download was like finding a twenty in my pocket.  Wondering of the possibilities of what to come in this second episode I started it up and was immediately floored.  The episode starts with a bang and has enough twists, turns and throwbacks to keep it going until suddenly you realize you’ve beaten it. 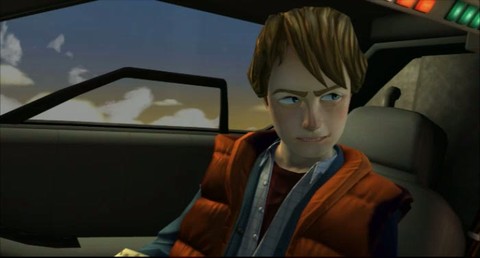 If I had to list one thing that the first episode of Back to the Future: The Game could have improved, it would be pacing.  It started a bit slow and while it did eventually pick up, it could have been a bit more even throughout.  This is an issue not had by its successor.  The story picks up right where the last lets off and hits the ground running.  This fast pace slows from time to time, but never enough to deter you from stopping play.  As the game ended and I got a small taste of what was to come in the third episode, I already couldn’t wait for the next.

The main part of the gameplay remained largely the same this time around.  The puzzles are not particularly difficult, but there is still a degree of excitement when you get something right, more often because of the consequences it has on the characters.  The part of it that still amazes me is how they’ve managed to get me to buy completely into the fact that this is a direct continuation of the original story.  All of the things that happen seem perfectly reasonable and fit right into the mythos.  It even manages to call back to itself by making winks and nods to stuff that happened in the first episode.

By and large, if you’ve played the first episode then you pretty much know what to expect from part two.  If you’ve merely gotten the first episode instead of going for the whole subscription, I highly recommend it, because if the second episode is any indication, the remaining portion will be worth every penny.  Looks like Telltale has a lot up its sleeve lately, so keep your eyes and ears open for the rest of the awesome library they’ve got coming.

Tags
Back to the FutureESHHamsterman2049ReviewsTelltaleVideo Games
Previous Article