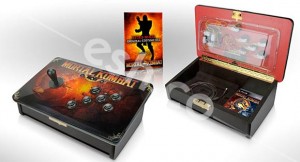 This week's episode starts off with Anime (Rin Daughters of Mnemosyne and Mirage of Blaze) before it turns the corner and heads down video game lane with a bit more Mortal Kombat (2011) coverage in the form of PS3 demo play-through reaction.

This week, Pandalicious starts off the show talking about some new anime she's been watching on Netflix which includes the short (but oh so brutal) series Rin Daughters of Mnemosyne where the lead character Rin is an immortal woman who is made to suffer some serious bodily harm, and ludicrous sexual situations. Then Ninjasistah chimes in adding the yaoi-esque Mirage of Blaze series currently streaming on Hulu which follows a weird "through-time-and-space" relationship between the main protagonist Takaya Ohgi and love sick vassel, Nobutsuna Naoe.

Then it's on to video games as the ladies discuss their reactions to playing the upcoming Warner Bros. reboot of the video game classic - Mortal Kombat.