HomeEventsPAX East: Silence Before The Storm - of Awesome
by: ninjasistah
0
Events / PAX East

PAX East: Silence Before The Storm - of Awesome

It's 9 am (ok, actually it's closer to 9:30am) on the first day of Pax East 2011. Team ESH this year is made up of NinJaSistah, Pandalicious and KingBabyDuck. 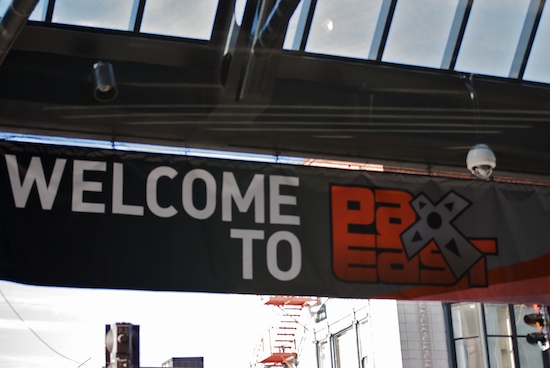 We've got coffee. We've got badges. We've walked around the BCEC once already and the con-funk has made an early appearance. What we haven't got is a clue.

There is so much more to see this year at PAX East. There are more exhibitors. The Looking for Game rooms are larger and they are scattered about the building on both sides. The event is sold out and it's not a surprise, at least not to me.

Last year the event totally took over the Hynes Convention Center (I experienced probably the most fun pub crawl of my life) and from the look of the diverse crowd here at the BCEC in Boston, the financial district is about to be over-run by gamers, and by gamers who have no idea where they are going, what they are doing or where anything is...just like me.

I have a map. I'm an educated woman, but I still have no idea where my appointments are, who and where I'm supposed to meet up with people, and yet I remain calm and collected. So watch this space people. I will be randomly sharing things throughout the day: photos, videos, tweets (@ninjasistah) and what ever else floats my fancy.

Check in with me and let me know what you want to see at PAX if you weren't able to venture out to the event this year.