There are a couple of features that have not quite yet been added to Nintendo’s latest handheld console.  The most hotly anticipated has to be the Nintendo eShop.  Let’s face the facts, the Virtual Console and WiiWare could have gone better.  What can Nintendo do to make sure that they don’t repeat the same mistakes made with their other downloadable services? 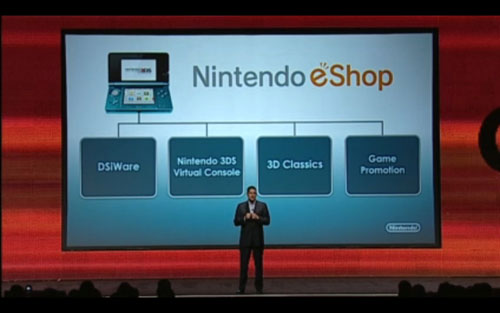 At the beginning of the lifecycle for the Wii Virtual Console, I checked what games launched for the service every single Monday.  After a few months, weeks and weeks would go by with either nothing or lower quality titles launching.  Nowadays, I typically don’t even bother.  I can understand that there are a very limited number of big games they can release, but with such a huge library of Gameboy games, they could at least toss us one a month and still have plenty to go around.

There are some weeks now where up to five titles get released for WiiWare.  That would be fantastic if they weren’t a fireplace simulator, notebook game and three titles involving the word extreme.  I guess what I’m trying to say is that not everything that gets released for the service is top of the line and that’s okay.  It only becomes not okay when that’s all that gets released for several months.  I know they can’t all be winners, but I really don’t need to use my 3DS as a flashlight.

Make Use of 3DS Features:

One thing they’re already doing very well is the inclusion of the AR software and other games built into the system.  Nintendo has already announced that they plan on releasing more augmented reality software for the system and this has me quite pleased.  I would encourage Nintendo to remember though, that there are a bunch of other new features that have been very well received thus far.  The gyro-sensor and StreetPass features are some other examples of some things they could utilize in some future software releases.

Play Before You Buy:

Another feature they are already planning that has me excited are demos.  They did it on the other DS through the Nintendo Channel on the Wii, but now you’re going to be able to download demos of upcoming games straight from the eShop.  This is hugely important and an incredibly smart move by Nintendo, because a lot of times, a demo will convince me to purchase a game.  Getting to experience just a brief chunk of a game is a great way to promote it and it helps me make up my mind as well.

Will Nintendo pull it together for the eShop on the 3DS and really nail it this time?  It certainly seems like that’s the direction they’re heading in, but only time will tell.  The service is set to launch sometime in May, so we shall be able to see firsthand very soon!  Here’s hoping that one of the first things they put up there is a 3D version of Punchout.