The Bethesda Softworks booth at E3 always seems to be amazing at every show.  While I was certainly expecting Elder Scrolls V: Skyrim and Rage to knock my proverbial socks off, there was one other game at the booth this year.  Wandering to the back of the booth, I noticed some comfy-looking benches with a large-screen sitting directly in front of it and a podium.  Sensing the promise of a live demo, I sat down and got comfortable.  After a short time Brendan Blewett, Audio Director at Humanhead Stuidos, came out to do a demo of Prey 2.  I wouldn’t have been able to predict how promising this game turned out to be. 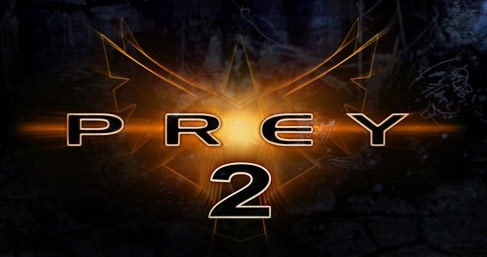 The demo started with the recording from a black box that belonged to a plane flying nearby the alien abduction scene from the original Prey.  Afterward, main character Killian, a US Marshall aboard the plane, wakes up in a strange alien setting.  After taking down a few extraterrestrials, he eventually gets overrun and blacks out.  This initial sequence by itself was actually not terribly impressive, save for a moment when I could have sworn Killian was firing his gun sideways which is under the dictionary definition of badass.  After this short introductory portion, Brendan promised it was just getting started.  This was a promise that was immediately followed up on.

In short, this game is an open-world first-person shooter with acrobatic exploration.  Now that I’m seeing it, I guess that’s not really all that short.  Let me start from the top.  Most of the game takes place in a giant city called Exodus, which is stylized with lots of tall buildings and bright neon lights.  Alien noire is what Humanhead Studios is calling this style which Brendan mentioned was inspired by, among other films, Blade Runner.  As is the case with most things that adhere to the noire style, the characters are described as all being shades of gray.  There are no heroes or villains in this game and it’s up to you to shape the world with the decisions made.

When the demo started back up again, some time had passed since Killian had gotten knocked out by aliens.  He is now a bounty hunter with lots of cool gadgets to use while catching fugitive aliens.  No, this is not a Boba Fett game, though I suppose since it’s first-person you could always pretend.  Killian first gets a alien target through the bounty wire and then he can use his scanner to identify his prey and yes I did mean to use that word specifically.  Someone who comes up as yellow is not your target, but may become hostile if messed with.  Find a red target and you’ve got yourself a bounty.  Most targets can be delivered either dead or alive, but there are always advantages to leaving someone alive. 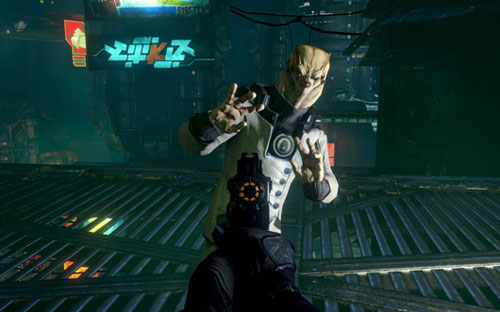 Ever wonder why in first-person shooters, no one seems to bat an eye when you shove a double-barrel shotgun in their face?  This game addresses this issue with its threaten mechanic.  Characters will react differently whether you have your gun holstered by your side or pointing at someone’s cornea.  In the demo, this mechanic was demonstrated when an informant demanded money for some information on a target.  Being a bit short on cash, we instead decided to shoot his giant bodyguard in the face and then train our weapon on the informant who was then much more willing to give up the info for free.  Another demonstration involved using the second-in-command of a target as a shield to try and make them give up peacefully.  After the bounty decided to blow off their lackey's head, we gave chase.  Once you capture someone, assuming they’re alive, you have the chance to interrogate them which my get you some additional information, but also has a chance of killing them.  Some aliens will even offer you some cash to look the other way and let them escape.

When you need to chase after enemies, some of which have the incredibly unfair ability to teleport, they have made it incredibly easy to traverse the city.  Not only are the several climbable surfaces in the game, but you can even shoot while hanging or sliding on the ground.  This is a system they were calling agile combat, which not only makes the game unique, but a whole lot more fun.  There will be over 20 gadgets that Killian gets to use to hunt down bounties in the game, including some rocket boots that will make him glide downward.

At the end of the demo, a frantic message came over the wire saying that Killian was being tracked and before you could blink, a giant alien with a gatling gun for an arm was right on our heels.  While the style is certainly something that has been seen before, this game looks to be put together in such an original and fun way, that it will be one I certainly won’t miss.  I can’t wait to see more from this game and maybe even get a chance to play it.