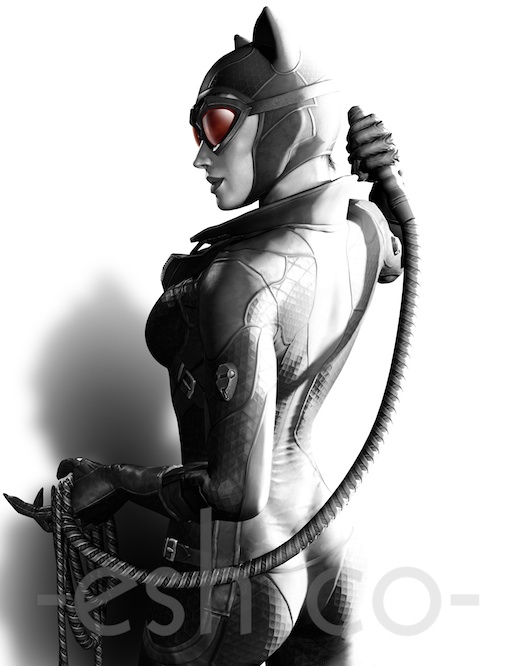 I'm now 48 hours into the madness that is E3 feeling like I haven't seen anything yet, knowing that I've seen a ton, and that I only have 8 hours to go. There is constant, pulsing throbbing in my feet that assures me I've been busy, so here is a quick recap of my day 2 at E3 2011. You'll never guess what it started with.

First up on deck was Batman Arkham City.

I had breezed by the Warner booth a few times and each time, the Bat caught my eye. Actually, to be honest it was the Catwoman that caught my eye, so I grabbed a Coke and got in line to get some hands on time with the game. If you played the first Bat title from the Warner group (Batman Arkham Asylum) then you already know the kind of production value to expect in City. The environments still have a very "realistically-creepy" feel to them. The Batman himself moves around similarly as before, so the game will feel like "coming home" to anyone that played Asylum. Same gadgets as before, just beefed up. Batman's "Detective Mode" – the sensory view that highlights items of interest on the screen for the player as they are trying to solve puzzles – is back as well.

I spent some time with Ghost Recon: Future Soldier, Assassin's Creed: Revelations, Farcry 3 and Raving Rabbids: Alive & Kicking. I quickly learned an hour was not enough, but I have to say everything left a lasting impression on me. Revelations promises to answer many questions players have (including myself) about the Altair+Ezio+Desmond triangle of "WTF?!" while being the final piece of Ezio's story as we head toward the final Assassin's game in 2012. To say I was excited to be treated to a first hand look at Constantinople and the older/wiser Ezio Auditorre could easily win "understatement of the year." Future Soldier fans: have no fear! I'll be whipping up a long piece about my time with the game soon.

After resting my feet and grabbing some much needed food, I visited with Activision. After all, what's an E3 trip without a visit with Acti? I'll get straight to the juicy: Modern Warfare 3 looks amazing. Though I was treated to a guided demo of two levels of the game, all the things I know and love about the franchise are in place. The graphics are stunning. The action is fluid, fast-paced and at times over the top. It was a pre-alpha look at a 2012 game that dropped my jaw. Prototype 2 looks to be what many people expected Prototype 1 – at least as far as gameplay mechanics – to be, which is a good thing. Prototype 1 kinda broke my gamer spirit. I like my lead characters brooding, seeking revenge, or trying to stop some horrible thing from happening for the greater good...not ambivalent, obnoxious, or taking orders from their ex-girlfriend. (Seriously Mercer, man up.)

After that, it was on to see two new Marvel game entries, X-Men Destiny and Spider-Man: Edge of Time and while I'm not a Spidey fan, I am an X-NUT! Both guided previews were interesting. In Destiny you play as an unknown mutant. It takes place in the timeline after Xavier dies where the world split into two classes: Humans and Mutants. Oh yeah, and further segmented into Purifiers who want to wipe out all of mutant kind and mutant genetics, and mutants that either care or don't care if people get hurt in the process of taking down the Purifiers. The player doesn't explore this world as a known X-Men or Brotherhood character, but rather as an unknown mutant who's choices in game affect their mutant allegiance. (Kinda Fable like in this instance.)

Beenox – the team that created Spider-Man: Shattered Dimensions – has been working on Edge of Time and it too looks great. The voice acting is on point. Spider-Man seems a bit more balanced in his melee fighting attacks than in previous games, and it focuses on two of the Spider-Man faves from Shattered Dimensions: The Amazing Spider-Man and Spider-Man 2049. In Edge of Time Spider-Man 2049 is trying to prevent on specific event from happening: the death of The Amazing Spider-Man. I watched the "start" screen closely as I waited for the Spidey dev team to enter the media room to start the guided demo, and it was eerie to watch Spider-Man 2049 walking in place with a broke, battered, bruised and obviously dead Peter Parker. It was dark and ominous feeling, but I liked it.

And on the 8th hour I rested. Over the next two weeks I'll have more in depth looks and thoughts on what I've mentioned here as well as other experiences the team had at E3 2011, but it sure was a busy Day 2 for me.