HomeReviewsThere is No Game Like Bastion
by: freeloader
0
Reviews / Video Games 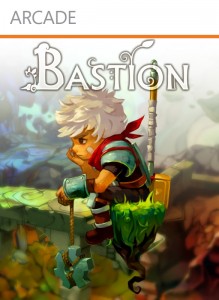 A demo of pure imagination

Microsoft's Summer of Arcade titles has launched a fresh, innovative title to the XBLA Store. Bastion, published by WB games, is a refreshing take on the isometric game mechanic and is a welcome departure from WB’s other library of comic book and cartoon inspired games.

Bastion’s art style, while not quite pastoral or neon is still very bright, lush and full of life. The game world is a treat to the eyes, and the soundtrack has a Wild West meets rock-n-roll feel, but you won’t have much time to admire the sights or sounds in Bastion, however, as parts of the world are continuously popping in, or falling out. What’s left, you’ll probably be destroying in hopes of finding items within. From what players experience in the demo, there isn’t much story to Bastion. The game starts rather abruptly, and the player is quickly introduced to the controls and the omnipresent narrator who observes and comments upon your actions in the game. Nearly everything from how destructive you are, or what weapon combinations you choose is commented upon. Over 3,000 separate lines of narration were recorded for Bastion, giving this title a lot of replay value. Players may find themselves experimenting with different weapons or skills, or just playing more skillfully in hopes of triggering new responses from the narrator. 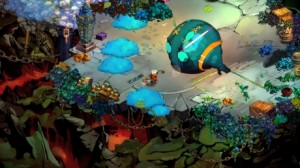 Bastion plays somewhat like the Gauntlet games of arcade past, crossed with the cramped bullet-avoiding gameplay of airplane shoot-em-ups like 1942 or Ikaruga. Bastion’s controls are intuitive and responsive, yet, while Bastion is easily approachable to the casual gamer, the controls and battle mechanics reward those players who use skill and agility rather than button-mashing. Players in Bastion have two weapon slots (usually a melee and ranged weapon), and a shield used by the left trigger. The player is also able to execute a dodge roll, and will find certain power skills similar to “bombs” in shoot-em-ups. As players get more comfortable with the controls, they will be able to pull off skill cancels to shave off animation time in actions, reflect damage with a well-timed shield block or deal more damaged with timed strikes using certain weapons. You’ll need all the help you can get, since the enemies in Bastion are quite powerful, often only needing 3 to 5 hits to kill you. With this in mind, speed and precision are your allies. 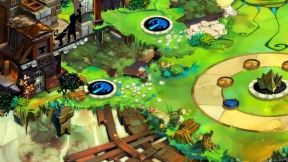 Bastion takes an innovative approach to the leveling system and statistic development, in addition to the “town” system of most RPGs. In something of a call-back to creation RPGs like Dark Cloud, Bastion allows the player to rebuild the world as the game progresses. What shops and other town features you place, and in what order, is up to you. In the demo, the player is given the options to replace the Armory and Distillery. The Armory is an area where you can store your weapons and skills and change your load-out before going into battle. Bastion encourages experimentation with items and skills, often requiring different tools for different enemies and areas. The Distillery is the area where you use your experience points to buy character upgrades, purchased in the form of various beverages. This was an interesting change from the well-worn skill point system of other RPGs.

As previews go, Bastion offers a solid and satisfying taste of what the full game will offer. The demo is a gripping 15 to 20 minutes of non-stop gameplay. The narration and weapon combinations in the demo alone easily earn the demo two or three run-throughs before the experience becomes stale, assuring that the full game should have a long life in any arcade fan’s 360 library. In an economy where every dollar counts with entertainment value, Bastion looks to be a purchase worth every point.

LSB's Otaku Hearts is so Kawaii