Devoted fans of The Legend of Zelda series can certainly be a fickle bunch.  If the last game in the series was too much like A Link to the Past's tried and true formula, the fans cry out for change.  If a game deviates too far, they all demand a return to the series roots.  Today's pre-game, The Legend of Zelda: Twilight Princess, fell into the latter category. 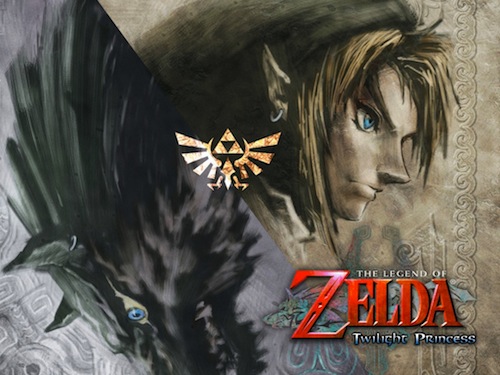 Originally being developed for the Gamecube, Nintendo swore that this was definitely coming to the aforementioned system even after their new motion controlled system was announced.  I also promised myself that no matter what happened, I was going to get the new game for the Gamecube.  Nintendo kept their promise, but since they released the game on the Wii first, I did not.  What can I say, I don't like waiting to play my Zelda games.

Being one of the launch titles for the Wii, Twilight Princess was among the first games I played for the system.  The motion controls for the game, while quite basic, did provide a fun level of immersion that hadn't been seen yet.  Looking back on it, most of it was waggling the Wii Remote back and forth like a moron, but it translated very well.  Aside from the sword, you could use your controller as a fishing pole, point it to aim arrows and it even made sounds.  My favorite thing, and I can't believe they didn't bring this back, was Link's ability to sheath his sword in a badass way after a fight if you put your sword away at the right time.  Another great new feature was Link being able to transform into a wolf.  It led to some interesting ways to look twice at a puzzle, because you never knew when the wolf form might be required to solve it.

After Wind Waker fans were foaming at the mouth for a darker and more adult Zelda experience.  It's clear that Nintendo was shooting very specifically for this with Twilight Princess.  I mean, come on, it's right there in the title staring you in the face.  With a grittier story and environment, they definitely pulled it off.  While still managing to retain the charm that all of the various iterations of Hyrule contain, this was quite possibly the darkest game in the series.  Even the soundtrack almost rings of Danny Elfman with many mischievous and mysterious tunes.  Not among them is the song playing during the fight with beast Ganon towards the end.  If you listen very carefully it sounds like “I’m a piggy” is being repeated over and over again.

For many, this game was a step too far back in the direction of being too formulaic, and I can certainly see where they are coming from.  If awesome is what they’re calling formulaic however, then sign me up every time.

This year, Nintendo took all the great things that have happened over the years with their system and have combined them into The Legend of Zelda: Skyward Sword.  With perfected motion controls, an open world with great characters and a beautiful orchestrated soundtrack, it is certainly a contender for my favorite game of this year.

Happy Holidays from the ESH Family